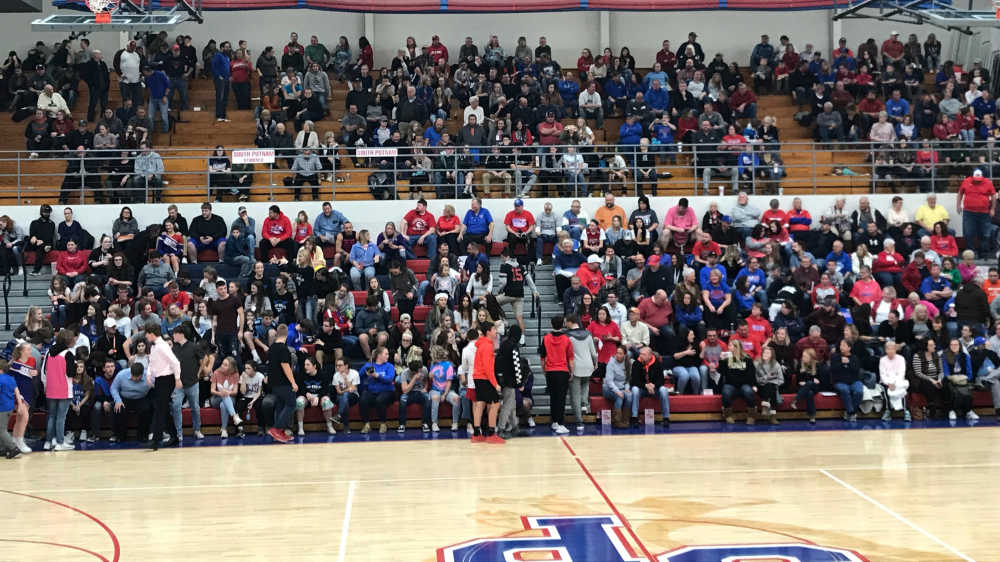 The crowd at Friday night's Greencastle-South Putnam basketball games was the second-largest of the school year so far, South AD Tom Starnes said. The regional football game was the biggest crowd of the year.
Banner Graphic/JOEY BENNETT
Order this photo

After seeing a couple of lopsided boys’ basketball games the previous two times, Friday’s South Putnam-Greencastle game was a refreshing change in terms of enthusiasm, stellar play from both teams and a generally enjoyable evening.

South Putnam eventually wore down Greencastle and won by 10 points. The Tiger Cubs will get their chance for revenge in the first round of the Putnam County tournament in February.

Meanwhile, tonight’s Cloverdale at South Putnam game has a large number of storylines that should also make it an excellent game.

• Fluke or not? — Can Allen Plunkett individually and the Eagles as a team repeat their outstanding performance against Greencastle?

This is “the” year for the senior-laden Eagle squad, and while it may not have started off as well as South had hoped in some respects — namely a Western Indiana Conference loss to North Putnam — Greg Dean’s team has gotten off to a 3-1 start for the second straight year.

Ironically, the Eagles also lost to North Putnam last year as their only blemish among the first four outings. Last year’s Eagle team only finished with an 11-13 record, however, and this year’s version is hoping to improve upon that mark.

Plunkett was as good as he has ever been on Friday, shooting efficiently from both inside and outside.

He credited his teammates for finding him down low with sharp, perfectly-aimed passes that led to several easy baskets in the lane area.

“They did a great job,” Plunkett said afterwards. “Whenever the ball touched the paint, we were successful.”

“Our post-entry stuff was very good,” he said. “We gave pass fakes when we needed, and we did a good job of finding our opportunities and recognizing when to pass it.”

(As an old coach, I always stressed making bounce passes to the post instead of chest passes. My players would ask ‘why?’, and I simply said the difference is that bounce passes don’t get stolen.)

Plunkett described the many emotions that helped motivate him and his teammates in their Friday win.

“This is the last homecoming we’re ever going to have at South, and we got to play the biggest rival on our schedule for the bucket,” he said. “This is the one you circle on your schedule. It means the world to get a win against them.

“For the team going on, this is going to give us momentum to build off what we did [Friday].”

For Plunkett’s sake, he needs to figure out how to avoid the foul trouble that plagues him far more often than it should for a player of his caliber.

“My teammates did a great job when I was out, to get the lead back and grind,” he said.

Plunkett loved the environment of Friday’s game, and he and his teammates want to see it repeated often.

“Our fans are amazing,” he said. “This county is amazing in its entirety. They come out, and it’s insane to play in front of that many people.”

Coach Dean loved the defensive intensity his team showed on Friday night, and hopes it is the norm from now on.

“This group has worked hard to be that kind of defensive team,” he said. “We want it to be a calling card, and something we can hang our hat on. Austin Arnold did a great job on the ball; his length makes it really tough for opponents.”

• Bucket protectors — Can the Eagles keep the bucket for longer than three days?

The bucket and the paddle are incredibly big things to both the players and their fans in all the sports in which these heirlooms are passed along to teams winning head-to-head matchups against the current holder.

South took the bucket from Greencastle on Friday night, and the Eagles hope to hang onto it for more than just a few days.

• Home, sweet home — Can the Eagles continue to defend their new homecourt?

OK, it’s only been one game so far. But the South seniors would like nothing better than to end their careers in 2019 without having ever lost on the nice-looking new court.

• Righting the ship — Can Cloverdale turn around its 1-4 record and continue its run of five straight winning seasons?

This year’s version hopes to begin that turnaround tonight and get things headed in the right direction.

Last year through five games, the Clovers averaged 63.8 points per game; this year against the same five opponents that number is 49.8.

Freshman Kyle Thomas has been as good as advertised, maybe even better. The 6-1 point guard leads the team in scoring and has scored at least 16 points in each game.

His turnover numbers are low, and he’s just as skilled at getting the ball to teammates as in producing baskets.

The Clovers have had a tough schedule to date, and that should only help them as their development continues.

Rady’s team lost 67-54 to a huge Monrovia team on Saturday night, and he knows how daunting of a task his team’s season openers have been.

“This is kind of a ‘murderer’s row’ for us,” he said. “We are playing a lot of teams who have a lot of seniors. It’s been a tough stretch, but as long as we look inward to improve ourselves we’ll be OK.”

Rady added that when a team plays an opponent who is “better than you” and you lose, that the defeat helps to expose areas where your team needs to improve.

“Losing teams point at each other and play the ‘blame game’,” he said. “If we can continue to get better at different situations and look at ourselves and how we need to get better, instead of putting blame on someone else, this stretch will only make us better.

“If we start pointing fingers, then it’s just going to implode,” Rady added. “We’ll see what kind of team we are, and how we respond to this adversity. I’m anxious to see what happens.

“This stretch can make us better and a team that can contend for a sectional title.”

The coaches: Patrick Rady is in his fourth year at Cloverdale. Greg Dean is in his fifth year at South Putnam.

History: Cloverdale won 64-37 last year in the first round of the sectional, and leads the series 28-19 over the past 30 years.

Key players: Freshman Kyle Thomas leads the Clovers in scoring at 18.2 points per game, and has scored at least 16 points in every game this year.