Mary Timm is on quite a roll.

Just days after receiving a full-ride scholarship from Marian University in a surprise ceremony, the North Putnam High School senior has landed another honor in being named 2018 Putnam County DAR Good Citizen winner by Washburn Chapter, Daughters of the American Revolution (DAR). 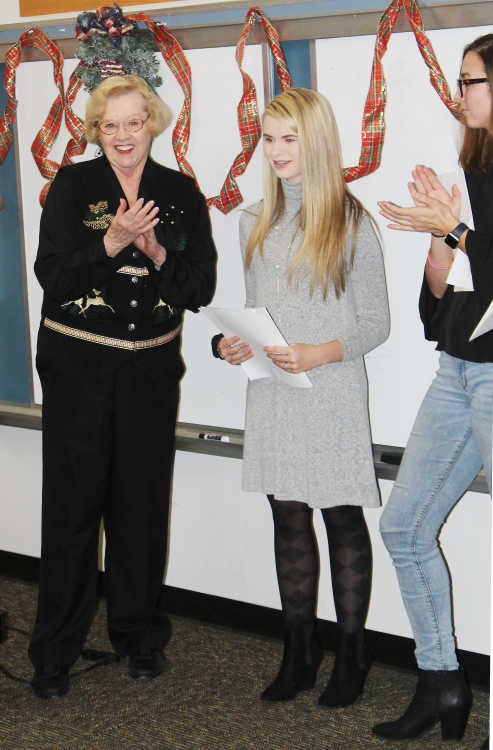 The daughter of Mark and Angela Timm and stepmother Ann Timm, Mary was joined in the final four of the Putnam County DAR Good Citizen competition by other school representatives:

"It is a great honor to be selected as the Good Citizen of a high school," DAR Good Citizen Chairman Jinsie Bingham, who emceed the program, said, "as the nomination comes from the faculty, of course, and they know best."

Bingham explained that each of the county's four high schools selects one outstanding senior who boasts a variety of interests, makes positive contributions to home, church and community and displays such qualities as dependability, honesty, leadership, cooperation, self-control and initiative.

In addition to reviewing a packet of information about how the candidates demonstrate the qualities mentioned above, a grade transcript and letters of recommendation also factor into the final selection.

Candidates must submit a 500-word essay to complete the competition. This year the theme was "Our American History and Our Obligation to Preserve It."

Timm tackled the essay by noting that "ever since America was founded in 1776, we have experienced countless challenges, from achieving freedom to a civil war to a changing economy.

"As we move forward into the future," she said, "America will face the challenges of a growing a hungry population, as well as a social media empire."

She noted that with the world population expected to exceed more than nine billion by 2050, the struggle to feed America's more than 325 million people is real with one in every six facing hunger or food insecurity issues.

"As our country continues to develop," Timm wrote, "the amount of land and resources we have will continue to diminish. Americans will be faced with the daunting challenge of feeding more people with less land and fewer resources. 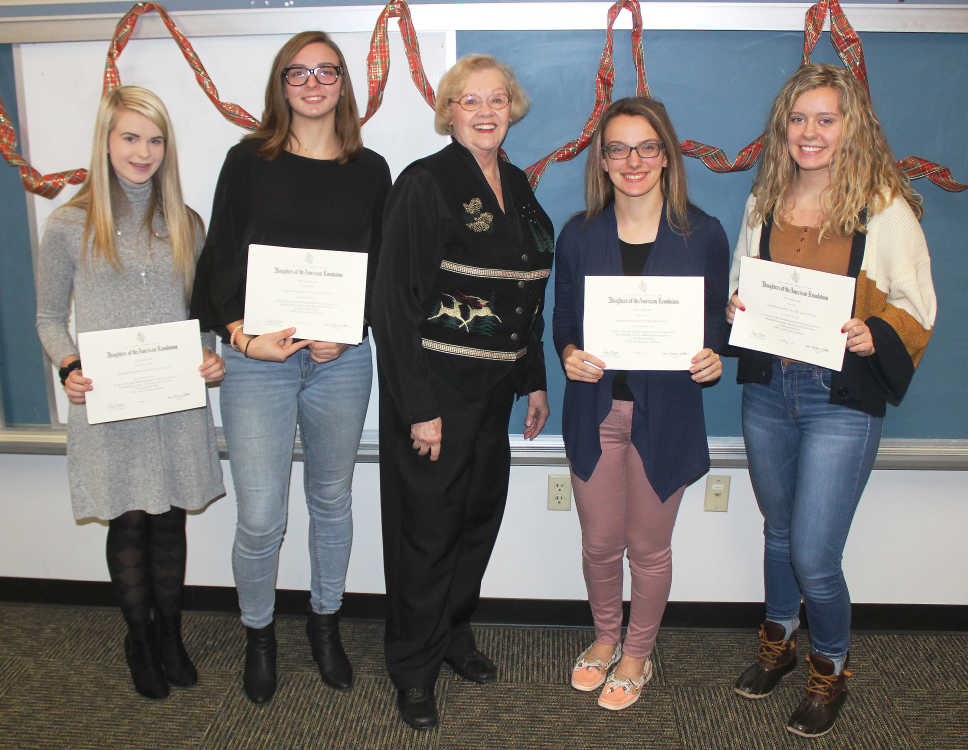 Mary Timm (left), a North Putnam High School senior and winner of the 2018 Putnam County DAR Good Citizen Award, is joined by the other county finalists after the announcement is made by DAR Good Citizen Chairman Jinsie Bingham (center) at the Putnam County Public Library. Other finalists are Gretchen Weliever (second from left), Greencastle; Helen Eaglin (second from right), South Putnam; and Hannah Rady, Cloverdale.

"Our country will have to develop new and out-of-the-box methods for feeding everyone from people in cities to rural towns," she added. "Whether the solution is technology, aquaculture, vertical farming or ideas not yet created, this is a challenge America will have to be prepared to face."

Turning her attention to the social media issue, Timm pointed out that nearly 200 million Americans use social media as a common sources for news, ideas and social interaction.

"The challenge America will face," the Putnam County teenager said, "is the effect of social media on our country's youth. Many 2000's children do not know a life without social media and see it as a reliable sources for their news and facts. They will grow up believing it's OK to develop opinions based on what 'username123' says versus finding facts for themselves and forming their own opinions."

Timm concludes by saying "every American citizen carries the responsibility to preserve the history, heritage and values of this country we love. As a country founded by agriculturists, I believe it is our responsibility to support today's agriculture industry in finding innovative ways to feed our growing population.

"With America's First Amendment being the freedom of speech," she continued, "we need to understand the challenges presented from trillions of comments and posts being at our youths' fingertips. We should encourage people to make wise decisions when using these media outlets. Most importantly, when faced with future challenges, Americans must find motivation in all we've overcome and guidance from the heritage and values our country was founded on."