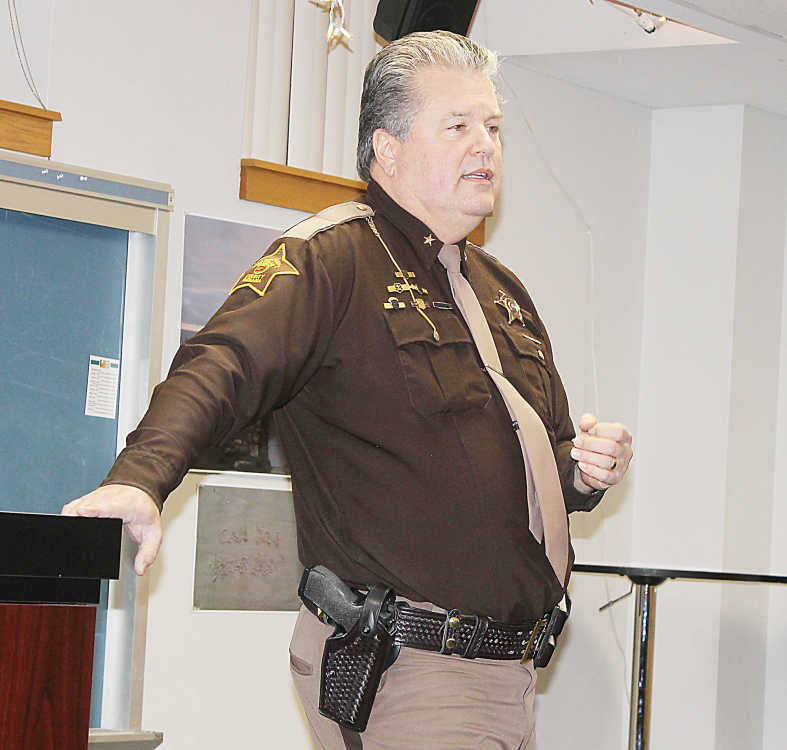 Sheriff Scott Stockton doesn’t see one overwhelming problem facing the Putnam County, but there are a lot of smaller issues.

“I don’t see one dominant issue facing law enforcement, but everything is a problem,” Stockton said.

The sheriff shared his thoughts at a recent public meeting at the Putnam County Public Library, the latest in the Community Conversation Series sponsored by the Greencastle League of Women Voters, PCPL and the Greater Greencastle Chamber of Commerce.

However, while the problems manifest themselves in many ways, Stockton seemed to keep returning to one particular root cause on this evening — mental health.

“I think the county and the city need a mental health and treatment facility,” Stockton said.

One element of this would be treating the drug problem in the community, though the sheriff balks at labeling it an “epidemic” locally.

“I don’t think Putnam County overall has an overwhelming drug epidemic,” Stockton said. “I think it’s a concern but I don’t think you have to worry about going into TSC and seeing drug deals going down.”

Instead of these more sinister (and perhaps antiquated) views of drug problems, Stockton sees opioid addiction as more subtle, often beginning with people recovering from an injury or surgery.

“You really have to be careful because these painkillers are really addictive,” Stockton said.

Likewise, even with methamphetamine use, which is always illegal, Stockton said he really doesn’t see large manufacture and distribution operations locally. The problem is more in personal use.

“I can’t remember the last time there was a meth lab taken down,” Stockton said. “And if there was, I think Prosecutor (Tim) Bookwalter would make them regret it.”

Even school and workplace safety, another hot button issue, often comes down to mental health.

“It’s about people with mental illness who have access to weapons,” Stockton said.

Of course, modern technology has made it possible to cause uproar even when no violence is planned.

“There have always been acts of violence but with social media it’s easier to cause a scare,” Stockton said.

He added that besides his department employing a deputy to make rounds at local schools, the schools themselves have taken positive steps, such as school resource officers at North Putnam and Cloverdale.

“I’d love to have a school resource officer in every school — love it — but where’s the funding source?” Stockton asked

“Quite frankly, our legislature has not helped us do our jobs,” Dory said. “It’s now legal to have guns on school property. There are limits on what an employer can do about guns on its property. I’m all for people’s right to have guns, but our schools and employers should have the right to protect their people.”

Regardless of these limitations, Stockton has done his best to educate children about gun safety by taking the Eddie the Eagle program to local schools and daycares.

Asked if he believes literacy rates and incarceration rates are related, Stockton said literacy is certainly a factor.

“I think literacy and comprehension of consequences are related,” Stockton said.

In this light, Stockton would love to add a GED program at the Putnam County Jail, but inherent problems include the short length of inmates’ stays, shortage of teachers and internet access.

In dealing with these and many other problems, the sheriff said it’s important to stay connect with other agencies, particularly his fellow sheriffs.

“Throughout the state of Indiana, the sheriffs have the same problems,” Stockton said.