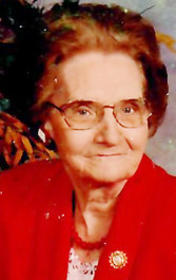 She was retired as an assistant administrator from Indiana State University.

Freda was born Dec. 21, 1924 at near Dennison, Ill., the daughter of Fred and Nellie Price Dawson.

In addition to her husband and parents, she was preceded in death by a son, Ed; three grandchildren and one great-grandchild.

She was a faithful member of the Dunlap United Methodist Church.

She formerly was a member of the Singing Sam's and Burnsides Guild. One of her proudest accomplishments was her formation of the Duke Family Singers.

Services in honor of her life will be 10 a.m. Wednesday CST at Pearce Funeral Home at Marshall with her sons, Bill and Tim, conducting the service. Burial will be in the Dunlap Cemetery. Visitation will be 4-7 p.m. Tuesday at the funeral home.

Memorial contributions may be made to the Dunlap United Methodist Church.

Online condolences are being accepted at pearcefunralservices.com.