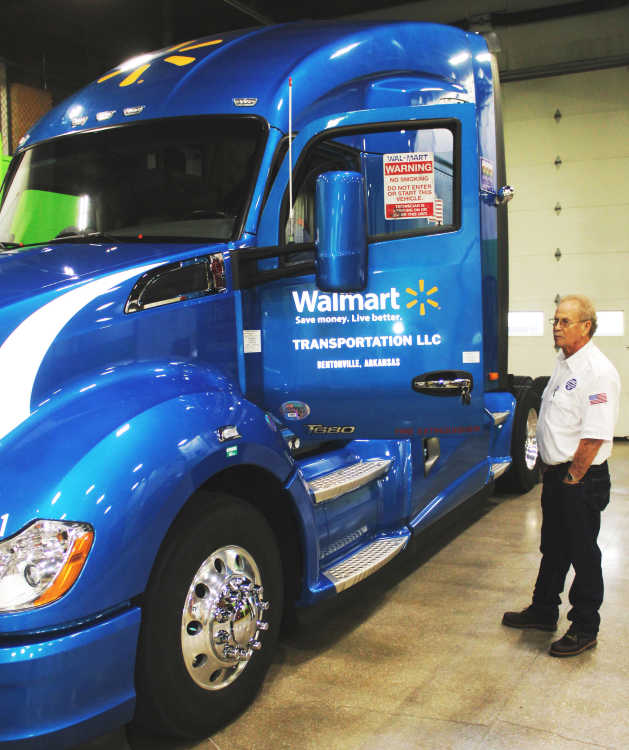 Richard Morgan looks over the blue Kenworth truck he will be driving the rest of his Walmart transportation career, thanks to racking up three million accident-free miles the past 24 years.
Banner Graphic/Eric Bernsee

“We had nasty winds down in Kentucky that day,” Morgan said Thursday as co-workers, family (wife Carol, daughter Heather Whitis and brother Carl) and Walmart brass celebrated his accomplishment. “Wind and rain and 40-mph winds. It was very nerve-wracking actually as I reached the three million.” 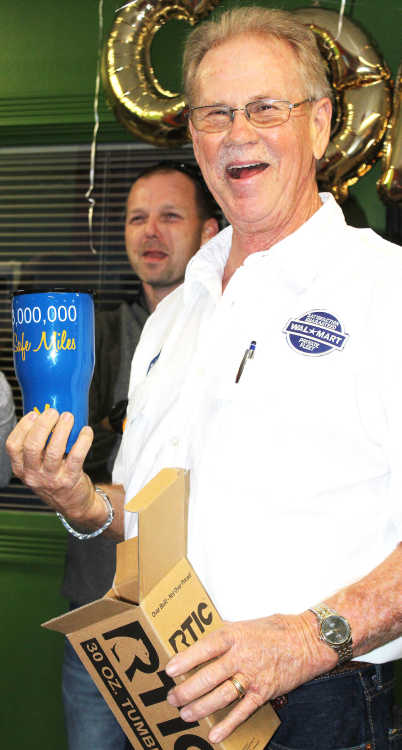 Richard Morgan laughs and shows off a custom mug honoring his three million accident-free miles, which on the opposite side calls him “Captain” Morgan.
Banner Graphic/Eric Bernsee

In doing so, Morgan -- who’s been driving for Walmart for 24-1/2 years -- equaled a feat first accomplished by Mike Allred of Greencastle in July 1992 and then duplicated by Jim Stone in January 2017 and Dale Smith in July 2017.

Gene Williams, another of the 54 drivers based in the Greencastle unit, is apparently poised to pull off the feat sometime in 2019 if his luck holds.

But it’s a tough thing to do. No accidents. No scratches. No dents. No tickets. 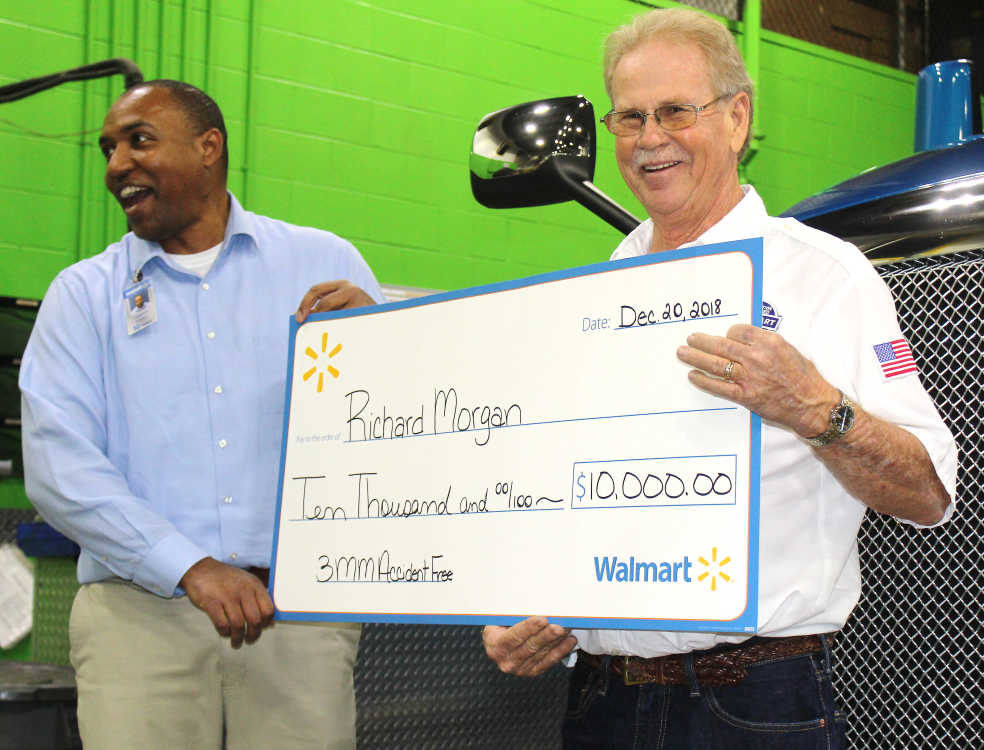 Overall, Morgan’s been driving a truck for 46 years and even won the 2014 Indiana Motor Trucking Association (IMTA) Driver of the Year award. Along the way he’s had only one incident.

The three million accident-free miles earned Morgan a check for $10,000, a plaque for his wall and a bright blue Kenworth truck personalized with his name and accomplishments to drive until he retires.

“I didn’t really think so much about it,” Morgan admitted, “until I got it, but it really is a pretty good accomplishment.”

The closer he got to that magical three-million mark, the enormity of it started to wear on Morgan more and more, he said.

After all, three million miles is the equivalent to 12-1/2 trips to the moon or 120 trips circumnavigating the globe, Walmart General Transportation Manager Jason Bickham pointed out.

“The last couple of weeks I didn’t get much sleep,” Morgan said. “Every little thing starts working at you.”

Morgan is the epitome of what Walmart expects from its drivers, Bickham said.

“When you think of all the things we ask our drivers to do,” he praised, “Richard has done and done safely every one of those miles.”

Bryan Most, Walmart East VP, took Thursday’s occasion to make his first appearance in Greencastle, lauding Morgan for being ”completely focused every single day” in order to keep from putting a single scratch on the truck or getting a single citation over the years.

“Obviously there’s a culture of safety here,” he said of the Greencastle facility, noting that of the 54 drivers here, 25 have one million or more safe miles to their credit.

“That speaks to a commitment to safety,” Most said. “Drivers and the whole team are doing the right thing every day.”

Singling Morgan out as being typically humble, as most good drivers are, Most said his attention to safety isn’t by accident.

“It’s about not getting in a hurry and doing the right thing every day ... although sometimes it (avoiding an accident) also be by the grace of God.”

Doug, another veteran Walmart driver, can attest to that. He said he had logged more than 2.25 million accident-free miles when one morning he headed south on U.S. 231 toward Interstate 70.

Entering the ramp to the interstate, he encountered nothing but ice and his rig just followed icy ruts set the semi that went before him had set down, and bam! Goodbye accident-free miles record.

Walmart drivers who pass four million accident-free miles earn a red semi cab, of which there are 16 in the entire company, none in Greencastle.

The aforementioned Allred came the closest. He retired last week with 3.7 accident-free miles.

Morgan, the 267th Walmart driver company-wide to reach the three-million mark, has no plans to shoot for that mark. In fact, he said he was originally thinking about a December retirement, but now that he has the new blue rig, he plans “to hold on a little longer.”