Like the age-old gravediggers who came before him, Jon Rice's noble efforts are as inconspicuously carried out as the quiet cemetery surroundings in which he works. 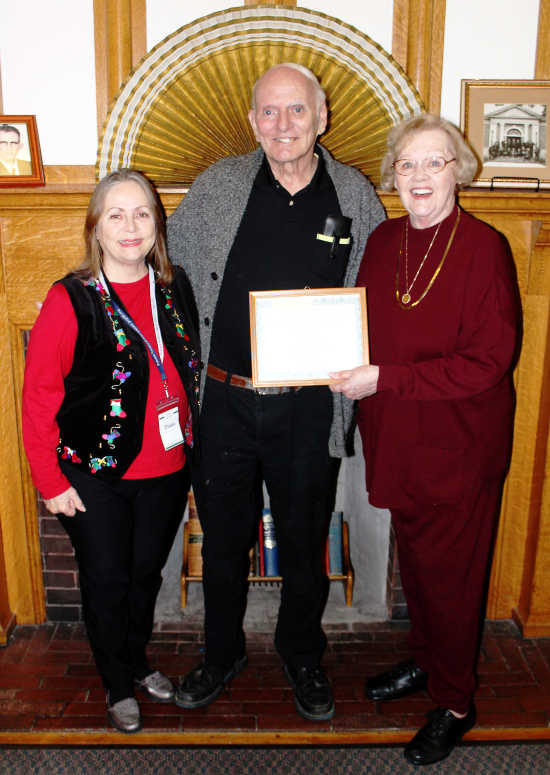 Jon Rice, a collector and documentor for Find a Grave, is presented the 2018 Historic Preservation Award by Washburn Chapter, Daughters of the American Revolution, represented by Jinsie Bingham (right) and Diana Brumfield in a ceremony Friday at the Putnam County Public Library. Banner Graphic/ERIC BERNSEE

Yet when genealogists and researchers google Find a Grave, Rice's labor of love often pays off with the cemetery, location and photograph of the particular gravestone in question.

And because of that, Rice is the 2018 Historic Preservation Award winner as presented by the Washburn Chapter, Daughters of the American Revolution. DAR members Jinsie Bingham and Diana Brumfield, also a local genealogist, presented the award in a brief ceremony Friday at the Putnam County Public Library.

"Many of you involved in genealogy know you can google Find a Grave, type in a cemetery and location and be rewarded with a picture of the gravestone with all the pertinent information," Bingham said. "That doesn't work for each and every cemetery, but thanks to volunteers like Jon Rice, at least most of the local cemeteries have been documented."

Rice, a member of the Putnam County Cemetery Board, said he has visited somewhere between 85 and 100 burial places locally to document their gravestones. He's worked as far south as Knox County and as far west as the Illinois state line.

In Putnam County alone, Rice said there are 195 cemeteries, and he has collected data at 85 of them.

Through it all, he hasn't found any mushrooms, just a few small snakes and one memorable in-ground hornet's nest. Rice said he didn't get a really good look at it as he is still running from that incident.

Intending to just research his own family when he began this avocation, a conversation with Doyne Priest changed all that, Rice said, adding that once he got started he was hooked. That was 11 years ago, and he's still going strong at age 77.

A 1960 Greencastle High School graduate, Jon is the son of Haskell and Maybell Rice. Maybell was a member of the Thompson family of the Morton area, Bingham said, noting, "so Jon probably has more cousins than he can even count."

"Some of you will remember Jon Rice as the manager of the local Kroger dairy department," she said, noting he was at the supermarket for 40 years as "the employee who spoke to everyone and gave personal service."

Bingham called Rice "a hero to all of us doing family research."

"He is a volunteer who accepts no pay. All of those years of customer service at Kroger are deeply ingrained.

"On behalf of Washburn Chapter DAR, we say thanks to Jon Rice," Bingham concluded.