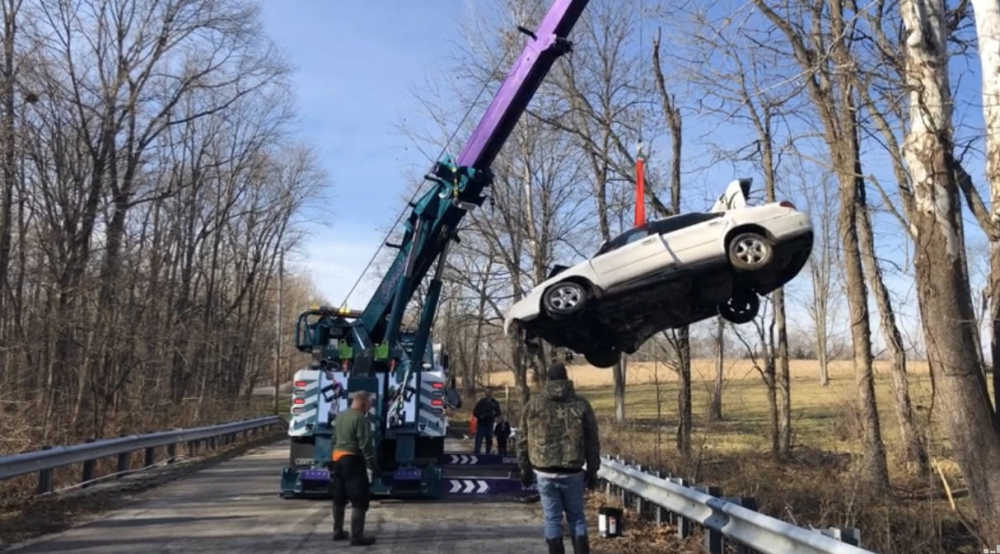 COATESVILLE -- Although she was later airlifted to an Indianapolis hospital in serious condition, a Coatesville woman likely owes her life to Good Samaritans who helped her following a Sunday-morning crash.

Her car went airborne, hit a tree, landed partially in a creek and caught fire before witnesses came and extinguished the fire and comforted her until the arrival of emergency personnel. 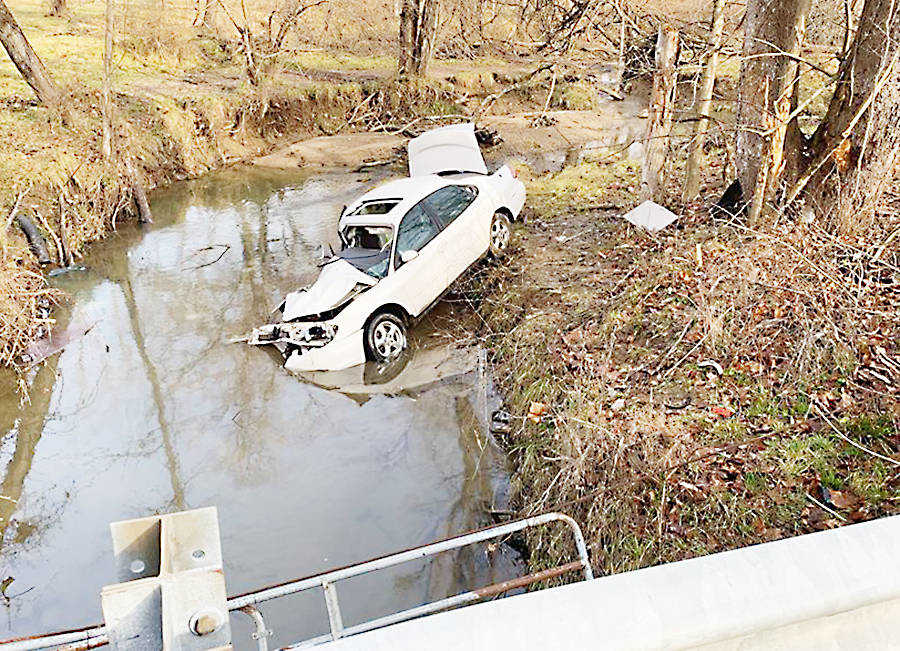 Bystanders used creek water to extinguish an engine fire on a 2003 Ford Taurus that went airborne across Clear Creek before crashing into a tree and spinning around into the creek. The driver, 66-year-old Gail Daniel, was transported to and Indianapolis hospital with serious injuries.
Courtesy Floyd Township Fire Department

At the county line, the road jogs slightly to the left and becomes Hendricks County Road 150 South. Putnam County Reserve Deputy Nate Trissel reported that Daniel's vehicle did not make the curve, instead continuing straight and leaving the roadway.

The car then re-entered the road and crossed over to the north side as it approached a bridge over Clear Creek.

As it traveled off the north side of the road, Daniel's car struck a guardrail end, at which point it ramped over the side of the bridge.

The car was airborne for approximately 100 feet, all the way across the creek, before it struck a tree head-on. Impact spun the car around and it came to rest with the front end in the water.

Witnesses told police a fire started in the engine compartment. The bystanders came to Daniel's aid, putting out the fire with water from the creek as well as comforting her until fire and rescue personnel arrived.

An ambulance transported Daniel to Hendricks Regional Hospital, where a StatFlight helicopter was waiting to take her to an Indianapolis hospital.

The Floyd Township Fire Department, through its Facebook page, reported that despite the seriousness of her injuries, the driver was alert and talking to medical personnel on the scene.

The department also reported that it is believed a medical condition incapacitated the driver just prior to the accident, causing her to leave the road at the curve.

Local agencies had no further information on Daniel's condition after she was taken from the scene.

With the car landing partially in Clear Creek, there was a release of vehicle fluids into the water. The Greencastle Fire Department was called to assist with fluid cleanup.

The Floyd Township Fire Department reported that several absorbent booms were placed in the creek at multiple locations near the accident, as well as just upstream from where the creek enters Heritage Lake.

The Indiana Department of Environmental Management was notified of the spill.

Trissel, who was assisted at the scene by deputies Scott Ducker and Brian Helmer, estimated damage at $10,000-$25,000.