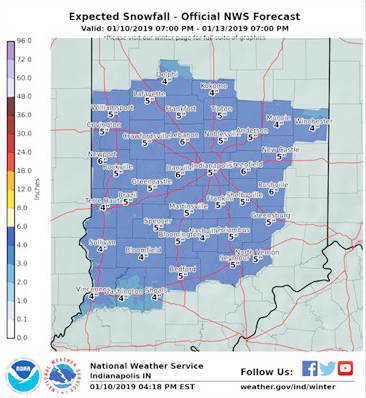 While winter has seen just a half-inch of snowfall thus far, indications are that could all change by the end of this week.

Indianapolis TV meteorologists have been predicting something in the four- to six-inch range for Putnam County and most of central Indiana on Saturday.

Meanwhile, an official National Weather Service (NWS) map showing expected snowfall for the period Friday through Sunday offers a prognostication of five inches of snow for the Putnam County area, with heavier totals projected in neighboring Hendricks County, among others.

The NWS has issued a special weather statement that a storm system is expected to move into the region late Friday night and into Saturday, bringing accumulating snow to central Indiana. Snow accumulations up to around six inches will be possible by Saturday night. This may result in snow-covered roads as well as difficult driving conditions.

This is still a developing situation. Snow amounts may change in later forecast updates due to changes with the strength and possible path of the storm system.

Central Indiana residents should pay attention to later forecasts and possible advisories and be prepared for accumulating snow on late Friday night and on Saturday.

The area is more than 8.5 inches of snow behind a typical winter at this point, the NWS says. The average central Indiana winter sees 25.9 inches of snowfall.

The storm expected to hit Central Indiana will be cutting a wide swath across the country's mid-section.

For many areas, it will be a long-duration winter storm event that lasts more than 12 hours. Over the Central states alone, snow will fall on more than a 1,000-mile-long west-to-east swath.

"For cities such as Indianapolis, Cincinnati, Louisville and others, this will be the first significant snowstorm of the cold weather season," according to AccuWeather Chief Meteorologist Elliot Abrams.

Motorists along the Interstate 70 and 64 corridors of the Plains and Midwest can expect a slow and slippery journey as a storm with snow takes aim from Friday to Sunday.

"Extra caution is advised when traveling as some motorists may be rusty with their winter driving skills," he said.