Exactly a year ago Saturday, Ken Owen, special adviser to the president at DePauw University, took audio from Martin Luther King's 1960 visit to Greencastle, coupled it with some historic photos and put the resulting effort on YouTube for all the world to see. 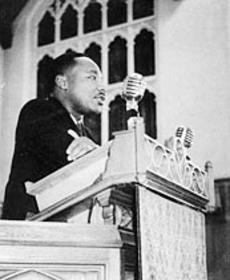 Today the Wall Street Journal has made good use of that resource, featuring it in a column by Coleman Hughes, "which is terrific," Owen notes in a Twitter reference.

"Monday marks Martin Luther King Jr. Day, which means it's time for the political commentariat to fight its yearly battle for King's legacy," writes Hughes in Friday's Wall Street Journal. "For critics of identity politics on the left and right, King's appeals to common humanity over racial division are a rebuke not only to white supremacy but also to the racial ideology of today's progressives."

In the essay, Hughes notes, "King's contemporary counterpoints were the Nation of Islam and the black-power movement, which emphasized racial division over common humanity.

"King didn't mince words when addressing these movements in a 1960 speech at DePauw University. 'Black supremacy is as dangerous as white supremacy, and God is not interested merely in the freedom of black men,' he said. 'God is interested in the freedom of the whole human race and in the creation of a society where all men can live together as brothers.'"

Dr. King was a featured speaker at "School for the Prophets," an annual event presented by the Indiana Methodist Church, which took place at Gobin Memorial United Methodist Church on the DePauw campus on Sept. 5, 1960.

Readers can access the opinion column, which is headlined "Martin Luther King, Colorblind Radical," at the Journal's website, www.wsj.com.