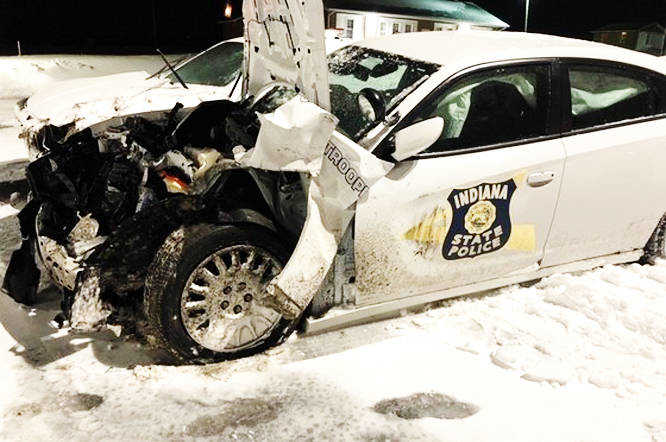 Indiana State Police Trooper Tim Rader’s patrol car was heavily damaged Saturday when it was struck by a semi-tractor trailer in the westbound lanes of Interstate 70 near the 13-mile marker.
State Police photo

PUTNAMVILLE – At approximately 8:40 p.m. Saturday, an Indiana State Police trooper from the Putnanville District escaped with minor injuries on Interstate 70 westbound near the 13-mile marker in eastern Vigo County, after his vehicle was struck by a semi-tractor trailer.

Preliminary investigation indicates that Senior Trooper Tim Rader was working a previous accident involving a semi-tractor trailer that ran off the roadway at the location.

Trooper Rader’s vehicle was positioned in the driving lane of I-70, with all his emergency lights activated, diverting oncoming traffic to the passing lane due to the original accident being in the roadway.

Both the driver and co-driver of the semi-tractor trailer, from Mississauga, Ontario, were transported to the hospital with non-life threating injuries.

Trooper Rader was wearing his seatbelt and received only minor cuts and bruises. Rader was released at the scene of the accident by medical personnel.

Investigating officer Trooper Justin Bell believes the semi-tractor trailer was traveling too fast for the road conditions and that speed was a contributing factor in this crash.