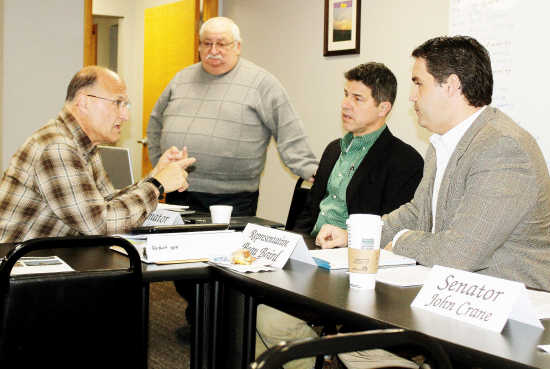 The governor wants it. Economic development pros do, too.

But that doesn’t mean passage of a hate crimes law is going to happen during the current session of the Indiana General Assembly.

And judging from comments and predictions from the three men who represent Putnam County in the Legislature, chances seem iffy at best that such a bill gets passed in 2019.

“If you had to predict,” Stinebrickner asked, “do you think there will be a hate crimes bill passed in 2019?” 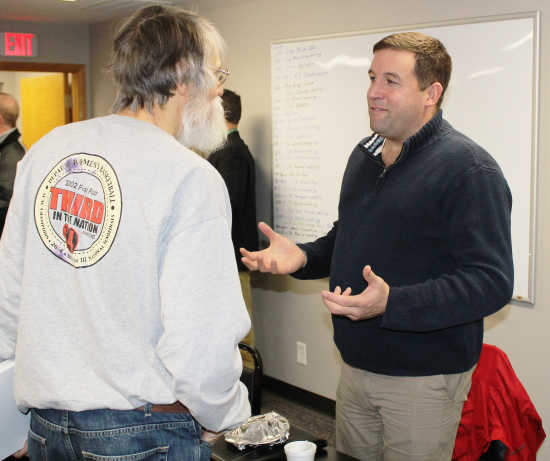 Sen. Crane, who represents District 24, including the northern half of Putnam County, recalled how the governor has ”weighed in very strongly, very favorably in support” of a hate crimes bill.

“But without being a prophet,” Crane called it an “uphill, climb,” with a “probably not” final decision.

Next, Baird, who represents all of Putnam County in the 44th House district, declined to predict an outcome only two weeks into the legislative session, his first ever.

Sen. Bray, who wasn’t expected to be in Greencastle Saturday until weather canceled a similar program in Spencer, wasn’t too optimistic about the legislation passing either.

“If you’re asking me to handicap it,” said Bray, who is now president pro tem of the State Senate. “It’s difficult to tell. I think it’s going to be close.”

Indiana Gov. Eric Holcomb has been very vocal in support of an Indiana hate crimes law, saying he’d much rather be one of 46 states with the law on the books than one of the five who currently do not.

Economic development directors across the state say business prospects continue to ask about a hate crimes law and having one on the books would aid their business recruitment arsenal.

But it’s not that easy, the legislators said.

“We recognize the significance of the issue,” Sen. Crane stressed.

There are two schools of thought right now, Bray said, with one type of bill listing crimes against race, religion and sexual orientation, while the other addresses more general characteristics in applying them to the aggravators judges might use to impose a longer sentence.

“The challenge becomes,” Crane added, “that if you add a list, we had better have everybody included or we promote the very discrimination we are trying to legislate against.”

Rep. Baird, meanwhile, noted that there are already aggravators on the books to enhance such sentencing without specifically naming types of victims individually in the law.

“I’d like to challenge everyone here to step away from calling it a hate crimes bill,” Baird said, opting for the “much more accurate” term of bias crimes legislation.

He noted that it is difficult to determine a level of hate without being able to know or determine a person’s state of mind at the time of an incident.

Crane noted that suspect from Cloverdale -- Nolan Brewer, 20 -- has been charged with crimes punishable by 10 years in federal prison if convicted.

“Should he spend 10 years in prison for not thinking?” assessed Crane, who noted that he has an uncle who lost his family in the Holocaust.

“What he did was an atrocity, don’t get me wrong,” Crane added of actions that might be characterized as akin to vandalism to the Congregation Shaarey Tefilla, a Jewish synagogue.

The suspect has been charged in federal court with conspiracy to violate civil rights for the July 28 incident in which he and an unnamed co-conspirator are accused of painting the symbols, as well as setting fire to part of the lawn at the synagogue, possibly through the use of homemade napalm.

Asking Hoosiers how they would handle punishment for the synagogue suspect or others in his place, Crane said respondents have suggested making him clean it up, pay a fine and/or spend some time in jail.

Of the 45 states that currently have a hate crimes law in place, some have a list with as many as 27 examples of those possibly offended against. Others have part of a list and some just have general characteristics, it was noted.

“Those 45 are not uniform in any shape or form,” Sen. Bray assured.