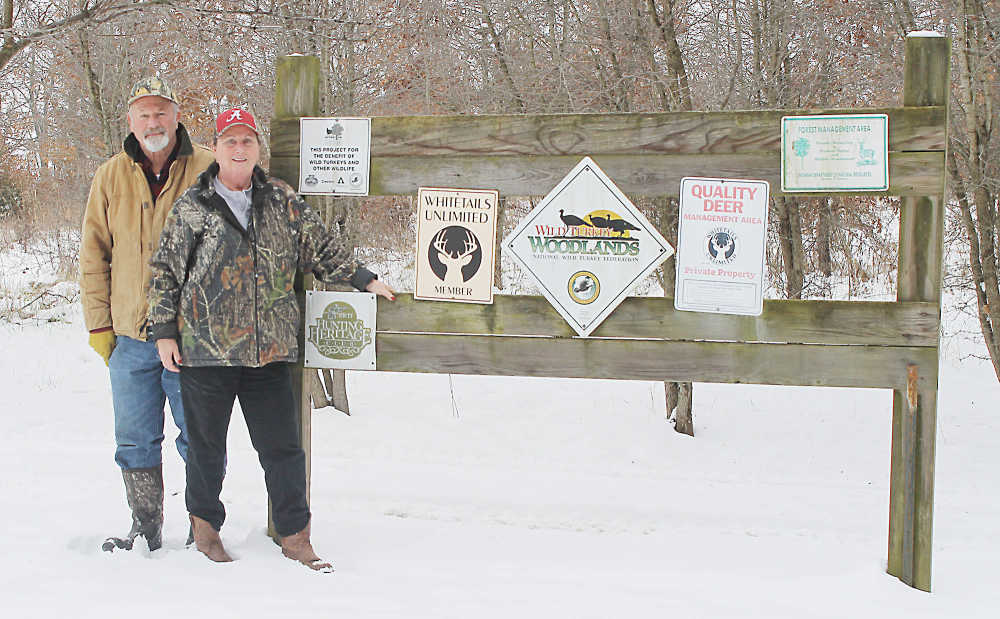 Set to be honored Thursday as Putnam County Woodland Owners of the Year, Allen and Peggy Royer exhibit their commitment to the conservation of their land through programs with the Department of Natural Resources, Natural Resources Conservation Service, National Wild Turkey Federation and Whitetails Unlimited. It’s a way of life for the Royers even in retirement, in Allen’s case after 43 years working for DNR.
Banner Graphic/Jared Jernagan
Order this photo

On Thursday, Allen and Peggy Royer will be honored by the local Soil and Water Conservation District for two reasons.

On one hand, Allen spent more than four decades working for the Indiana Department of Natural Resources, much of it as the district forester serving Putnam County and other surrounding counties, before he retired last summer.

The SWCD will be honoring him for his years of service.

On the other, the Royers have spent years using their land in western Putnam County, commonly known as the Wagoner Christmas Tree Farm, as an example not only of how to work with nature to restore and preserve woodlands, but also how to bring folks together in the process.

For that, they’ll be honored as the Woodland Owner of the Year.

While there may not be an obvious link between the two, Allen feels a spiritual link to this land that goes back to some of his earliest days working as a forester for DNR, seven years before he actually purchased the land.

It was 1976 and Allen was working in Greencastle, though not yet as the district forester. His predecessor in that job sent him out for his first solo project, to work with a man named Paul Wagoner.

During that very first trip to the land he has now called home since 1985, Allen felt a connection he didn’t quite understand.

“I think God meant for us to have this land,” Allen said.

Wagoner, who had been operating the Christmas tree farm since 1960, was elderly by the time he met Allen Royer. He spoke to the young forester about his desire to plant a group of black walnuts, which are notoriously slow-growing trees.

After discussing the proposed planting, the two men were walking back toward Wagoner’s house when the older man, unsolicited, shared his thoughts with Royer.

“He said, ‘Young man, I know what you’re thinking,’” Allen recalls. “‘Why would this old man plant these trees that he’s never going to see grow? Well, some day someone else is going to take over this land.’”

Allen gets a bit emotional as his continues, “Not in my wildest dreams did I think that person was me. It was like he was looking into my soul.”

To this day, that stand of trees remains on the grounds. The black walnuts of the Bicentennial Paul Wagoner Memorial Tree Planting are about 60 feet tall and about a foot in diameter.

That link has also led the Royers to keep the Wagoner name on the Christmas tree business, even though the Royer family has now owned the business for more than 30 years.

In that time, they have found ways to maintain their business while also working with the land to ensure the health of the trees and wildlife.

One example came a number of years ago when the deer were feeding on the evergreen trees they were growing for the business. Rather than try to fight against the animals, the Royers gave them an alternative.

“Let’s pull the deer out of the field and give them what they want,” Peggy said.

With this in mind, they took two acres of swampy area on the south end of the land and planted oak trees, which grew to provide a more suitable habitat in which the deer could feed.

Today, the deer only get into the evergreens if there are a couple of feet of snow and the tops of those trees are the only thing they can access.

They have also put in buffer strips near the creek, a wildlife plot and an area of prairie grass that attracts a lot of insects on which wild turkeys can feed.

“We’ve tried to lead by example,” Peggy said, “and when you’ve hosted as many field days as we have, a lot of others have been impacted.”

Impacting others really seems to be the chief goal. Over the years, the Royers have not only hosted field days for the Natural Resource Conservation Service (NRCS), but also countless hunter education weekends and retreats for church and scouting groups.

“These are the opportunities that we look for to enrich people,” Peggy said. “That’s what we want to be able to do is bring people together.”

Years later, the attendees will come up to them as young adults, saying, “Mr. Allen, Miss Peg, do your remember when we did this...?” Whether they actually remember them or not, the Royers smile, nod and ponder the impact their land has helped them make.

They specifically recall a youth minister who talked about the impact they had on him growing up, as well as a young man who is now a conservation officer.

They host the retreats at no cost, but their payment comes years later.

“We do all that for nothing,” Peggy said. “These are what we call paychecks. We look at each other, give a high five and say, ‘Paycheck!’”

With both Allen and Peggy now retired, they took on a new challenge last year, purchasing 46-1/2 acres west of the 180 acres they already owned. The new land is not nearly as forested, but they are ready for the challenge.

It’s a good new passion for the Royers and a chance for Allen in particular to continue putting into practice his professional passion for so many years as the district forester.

“It was a position that I loved. I felt it was my calling,” Allen said “I had numerous opportunities to go to Indianapolis. I passed them up because I felt that if God gave you the job you love, why take a chance?”

“I woke up every day loving to go to work,” he said.

Now in retirement, the Royers’ land is their life’s work and yet it still all comes back to the legacy of a man who passed away years ago.

“I think Paul Wagoner would be happy with what we’ve done,” Allen said.

Learn more in our special Soil and Water B section.