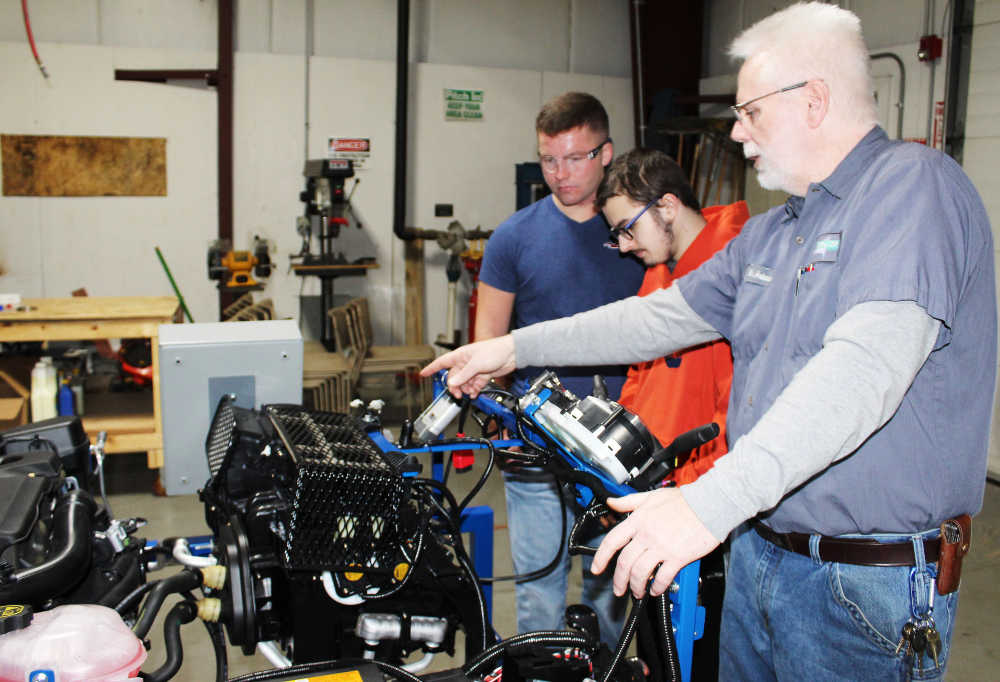 Thanks to a collaboration between the Area 30 Career Center and Vincennes University, students in the automotive trade will be able to get more hands-on with their training. New tools which will now change the way they are taught could spark greater interest in other trades at the local level.

Through the Early College model, Area 30, which serves students across the four school corporations in Putnam County plus Eminence, will have access to funds which will support programs in law enforcement, computer systems networking, advanced engineering, auto collision and auto services.

Much of this money will go, and has already gone, toward purchasing equipment which will take foundational concepts beyond the textbook.

The auto services class taught by Troy Anderson is an example of the impact this new equipment will have in the shop. It also shows how the partnership between Area 30 and the university will open up these programs to students considering a trade after high school.

“Three-quarters-of-a-million dollars has been given to Area 30 for the five programs,” said Michael Woods, who is the Early College assistant dean of instruction at Area 30. He also related that this was the third year that Area 30 and the university were continuing the partnership.

Anderson and his current students, who come from all of the area high schools except Eminence, can now be found tinkering with a mounted powertrain from a 2017 Chevrolet Cruze. Complete with a modern car’s essential internal components, it can be programmed to simulate a variety of mechanical issues which students can solve.

This new piece of training equipment is just one which has recently been purchased through the Early College program. It certainly is a nifty one that wasn’t available when Anderson was himself training to be a mechanic.

“We had to work on live engines 30 years ago,” he said. “Now they (students) can come out and be able to test in a variety of ways and not worry about their safety.”

The trainer, by its very design, allows students to see the inner workings of an automobile and how they are connected. This potentially changes the pedagogy of shop training, because they can actually see the car’s powertrain in action as if it were running down the road.

“It gives insight into how complex the whole system is,” Anderson emphasized. “It’s a whole other thing to actually show them and manipulate it. It’s about being able to simulate real world applications and solutions.”

The same principles apply to other new equipment like the OBD II System, which simulates a car’s electrical and mechanical workings like its display and fuel injection components. Both the OBD II and the engine performance trainer allow students to effectively work from “square one,” a skill that transitions to different aspects of automotive repair.

“There is a lot of crossover,” Anderson said. “They show the foundations, and they make it as in-depth as we can without having the complete package.” That carries over to how students are trained in the shop, because it is not as effective to have students just read about the process.

“It’s the hands-on element that is hard to develop in the classroom,” Anderson added. “The trainer, OBD II and the other new pieces make it as ‘real world’ as it can possibly be.”

It’s a theme that is impressed on Anderson’s students, who have begun to get acquainted with the equipment. Even as they may be able to understand a process from reading about a component’s function, it is that hands-on experience that matters most.

“That’s just how we learn,” North Putnam junior Austin Blue said. “It’s better than reading about it in a textbook, because you need to see it to get it.” This comes from a student who has an eye toward becoming a mechanic after he graduates.

Indeed, there is no real textbook used in Mr. Anderson’s class. Instead, they use simulation software to do the “reading” part of their coursework. But to both Anderson and Woods, working with and manipulating a physical representation is necessary to reinforce what they read in the classroom.

The partnership between Area 30 and the Early College initiative is what has made that possible. As a result of putting thoughts and ideas together to create an engaging environment, those five programs can see an increased enthusiasm from those interested or already working in a trade.

“I’ve had people come back who have went though the program and been amazed, and wish they could have had that experience,” Anderson said. “That’s a loud statement in my mind about how this equipment can help them better prepare to have a successful career.”

Though it attracts students with varied interests in those trades, Early College provides a leg-up for them to move forward after high school. Those who work in any of the five programs from the get-go can graduate with a year of college credits already under their belt.

“They can get the maximum benefit if they go two years in the program,” Anderson related. “Though I have students who come for one year and get as much as they can out of it and learn a lot.

“It’s going to recruit for itself,” Anderson added as his students talked amongst themselves. “It’s unimaginable to think how that can change the game as far as education in the trades goes here.”

Both Anderson and Woods hope this newfound support from dedicated educators can change what they feel is a persistent misconception, which suggests that those who learn about a trade at Area 30 are “misfits” or bad students destined for a mediocre career.

“We hope that these improvements and what students learn will demonstrate that we have kids who are bright and committed,” Woods said. “It’s not just about work in the classroom; this has meaning too, and they can go on and be successful.”

Area 30 will have an open house event on Thursday, Feb. 7 from 4:30 p.m. to 6:30 p.m., where interested students can learn more about Early College at VU and the programs which have been and will further be impacted by it.

Woods, who is also the assistant dean of instruction at the Area 31 Career Center in Indianapolis, hopes that the growing relationship between Vincennes University and Area 30 will attract more students in Putnam County to consider working in a high-demand trade.

“Places like Area 30 are a huge benefit to the community and the schools which send students to be taught here,” he said finally. “We want more to take advantage of it, because it isn’t supported or considered enough.”