John Kasich, former governor of Ohio and two-time presidential candidate (with speculation he will run again in 2020), will now visit DePauw University on Thursday, Jan. 31, as a guest of the Timothy and Sharon Ubben Lecture Series. 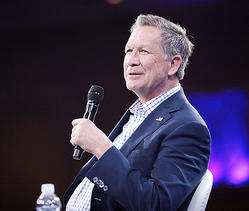 The event was set for Wednesday, Jan. 30, but DePauw has decided to close due to record cold conditions forecast for Wednesday, and the speech (along with other events) has been moved to the following day.

Kasich's talk, "Navigating These Partisan Times and Finding Your Personal Political Voice," will be followed by a question-and-answer session.

The event will begin at 7:30 p.m. in Kresge Auditorium, located within DePauw's Green Center for the Performing Arts (605 S. College Ave.).

For this event, spectators may form lines inside the Green Center prior to the doors' opening. The following items are prohibited inside the venue:

-- Cameras, video equipment and audio equipment by non-media personnel (cell phones are allowed but no photos or video should be taken with your device).

The DePauw visit by the 69th governor of Ohio and two-time candidate for president of the United States comes just 16 days after Kasich's second term as governor ended and as speculation continues over whether he will make another presidential run in 2020.