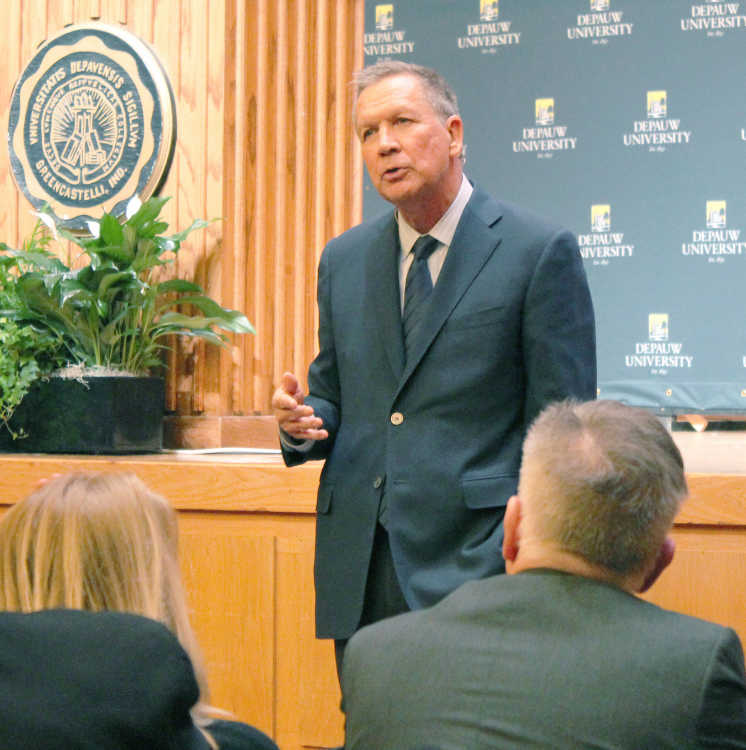 Before he spoke to an engaged audience inside Kresge Auditorium Thursday evening, former Ohio Gov. John Kasich made it clear that politics would not be the focus of his visit to DePauw University.

ōMy talk tonight is about how we need to live a life a little bigger than ourselves,ö Kasich said during an afternoon press conference to a question about universitiesÆ contribution to political discourse. ōAll this attention on the people at the top, to me, is not as important as what we do where we live.ö

That message would turn out to be the overarching theme behind KasichÆs Ubben Lecture, which was titled ōNavigating These Partisan Times and Finding Your Personal Political Voice.ö 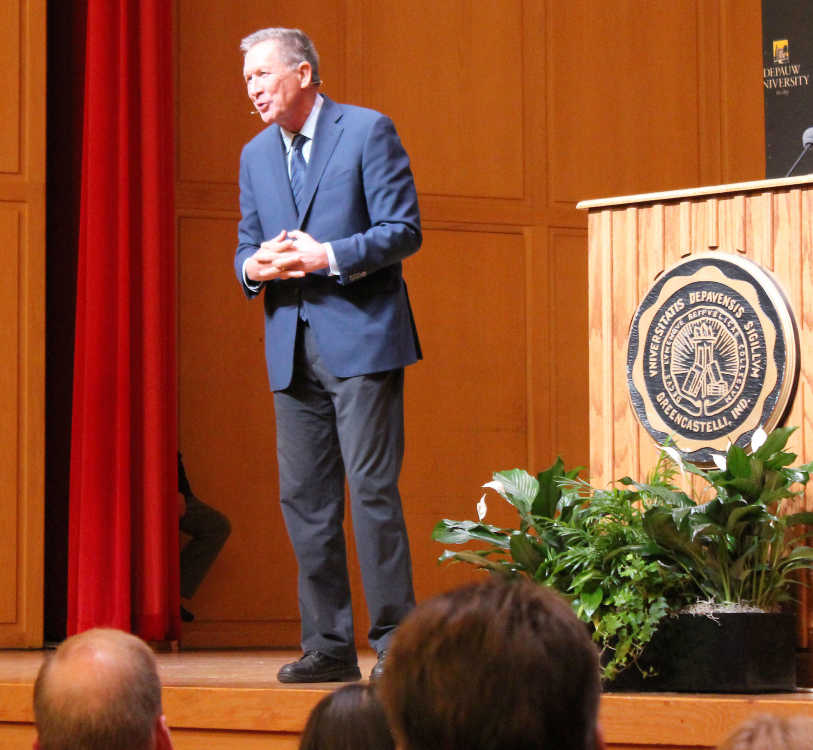 He conveyed the need for everyone to come together, regardless of background or political persuasion, in order to find solutions to our countryÆs most pressing issues. Kasich would also emphasize the importance of attitude through recounting interactions with everyday people.

Before he took the stage, professor of political science Sunil Sahu contextualized KasichÆs lecture by invoking a reneging of functioning democracy within the United States, as determined by the Democracy Index compiled by The Economist. Sahu pinpointed this decline beginning before the 2016 election, and suggested that divisive rhetoric and distrust were prime causes.

ōThe U.S. has been ranked as not being a full democracy, and public trust in government and our institutions has reduced,ö Sahu said. ōIt is this public trust which is crucial to stand up to populist demagogues and restore faith in our democratic processes.ö

Sahu then gave a brief background into KasichÆs experience in political office as a member of the House of Representatives and governor of Ohio. He also referenced KasichÆs meeting with President Richard Nixon while a freshman at Ohio State University. That interaction, incredible in and of itself, would be one of many inspiring stories highlighted in a lecture devoid of political posturing.

Kasich introduced himself essentially as a product of the working class who grew up in McKees Rocks, Pa., a suburb of bustling Pittsburgh. His father was a mail carrier and KasichÆs family were strong practicing Roman Catholics in a heavily Democratic-leaning community.

ōIt was so Democratic that we had roadblocks to keep Republicans out,ö Kasich laughed. That dividing mentality began to change when he left his hometown and enrolled at Ohio State. Kasich also became increasingly concerned about the social upheaval which was occurring during the latter part of the U.S. involvement in Vietnam.

It was then when he decided he would write to the president of the United States and request a meeting to air those concerns face-to-face.

ōMy uncle always said that you had to start at the top,ö Kasich said. Barely a month on campus, he badgered OSU President Novice Fawcett and his secretary until he finally met with the 18-year-old Kasich. Fawcett was the only college president to endorse Nixon in the 1968 presidential election and happened to have just been invited to the White House.

Kasich proposed that he could tag along as a student ambassador, an idea Fawcett shut down. Kasich then asked if he could convey a letter to the president about his concerns, which Fawcett agreed to. Kasich later met with President Nixon for 20 minutes inside the Oval Office in December 1970. It was that meeting which would inspire him to get into politics.

ōKeep asking until someone tells you æNo.Æ ThatÆs the first lesson,ö Kasich said specifically to the DPU students in attendance. ōI want young people to think that there are no limits to what they can do.ö

Kasich then told of his struggles finding meaningful employment after graduating from Ohio State, only to then find an opportunity at the National Library of Medicine in Maryland. He was then approached by a politician he would eventually work for, and from whom Kasich said he really learned about politics.

ōThe second lesson is that you have to seize the opportunity when it comes,ö he related. ōThe third is to keep your mind open.ö It was this last point from which began the meat of KasichÆs lecture regarding his distaste for division and, to his mind, politics as usual.

ōPolitics bores me,ö Kasich said simply. ōThere are so many people who are worked up, we even had times after the 2016 election when families couldnÆt even have Thanksgiving dinner together because they were yelling at one another.

ōDo those people really matter to you?ö Kasich asked the audience. ōIt can certainly affect your mood about things, but does it really matter how the president of the United States or some other big time leader is affecting you?ö

Kasich provided that we are to be motivated by the people around us if we want to promote change.

ōWe have the power,ö the 2016 Republican candidate said in one of his most striking moments. ōSomehow we have been losing sight of the fact that we call the tune, not somebody else that lives in a faraway place that we will never even see, let alone meet.ö

Kasich then pointed to a DePauw student, who was seemingly surprised at being picked out by the former governor.

ōThereÆs never been anybody ever made in the history of the world who is like you,ö Kasich said to her. ōYou have a special purpose, you have a destiny. Nobody can take your place; nobody can do what you were destined to do.ö

Kasich also emphasized his strong faith in God, and that the ōlittle æol meÆsö can make a difference and do meaningful things with the life they have.

ōLife ends here, so do we have an incentive to live a bigger life or a smaller life?ö he asked. ōThe great thinkers like Aquinas, St. Augustine and Martin Luther debated the meaning of life, not politics. What are we doing about here, and perhaps beyond?ö

A paradigm change in a woman Kasich met whose son was violently murdered by gang members made the point. He recounted how some in her family wanted to bribe prison security in order to exact revenge, and that she had enough of the hatred. That woman then used her grief to combat gang violence in her community.

ōSheÆs in the Book of Life, and sheÆs still here,ö Kasich said while appearing to try to not choke up.

ōWe forget that weÆre in the same rowboat,ö he said. ōWe need to get out of our silos. DonÆt only read those things you agree with or watch television so they reinforce all the things that you think.

ōWe want to know how we end this division in this country. Well it starts with you and me, it doesnÆt start with somebody else.ö

A quote from the civil rights leader Martin Luther King Jr. was cited by Kasich as a motto for young people and those who want to make a difference: ōIf I cannot do great things, I can do small things in a great way.ö

ōItÆs up to us,ö Kasich said in his concluding remarks. ōBecause power in the arena doesnÆt come from the top, not from the president or somebody else. Power comes from the bottom, from you.

ōIf you work with others to become part of a large mosaic that can unify rather than divide us, weÆll restore the heart and soul of this country if we come together.ö