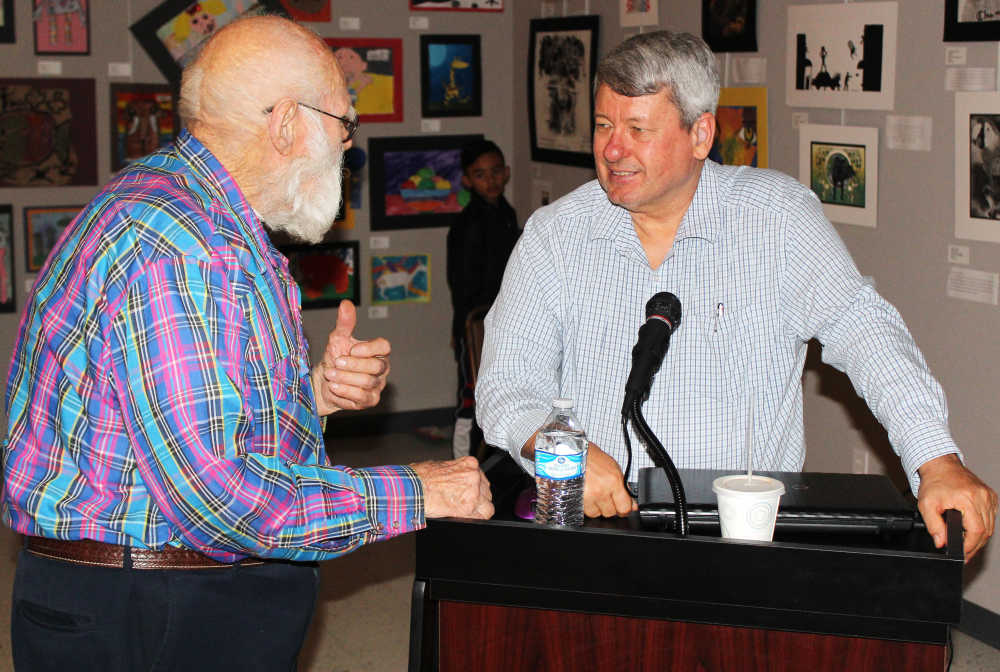 Coming by his fascination with small towns naturally, Putnam County Historian Larry Tippin is certainly a product of his own upbringing.

Having grown up in New Maysville in northeastern Putnam County, Tippin gleefully recalls riding his bike to what he likes to call “the New Maysville Mall.”

While there was certainly no mall in New Maysville -- or Belle Union, Brunerstown or anywhere else in Putnam County for that matter -- there was fabled Turner’s General Store.

In a structure believed built in 1832 at the same time New Maysville (named for Maysville, Ky.) was platted, Turner’s “was an institution, let me tell you,” Tippin told an audience of 50 during the latest installment of his “Tiny Towns and Vanished Villages” series at the Putnam County Museum.

The third installment in Tippin’s series -- which may have as many as six more presentations -- focused not only on New Maysville but also the controversy over two Belle Unions and Bobtown, along with Brunerstown and the rarity of its three nearby general stores.

Meanwhile, back in New Maysville, the Turner’s General Store building “still stands but it’s not in good shape,” Tippin said.

Joyce and Delbert Turner purchased the store and turned it into Turner’s in 1955, and in 1977 it was said to be the second oldest continuously operated store in Indiana. But like many big-city malls, the ravages of time and shifting shopping habits have caught up with the “New Maysville Mall.”

In its heyday, however, not only did Joyce Turner run the store but the building housed the New Maysville post office in its southwest corner, there was a barbershop on its west side and the Odd Fellows Lodge called the large room upstairs home.

Turner’s offered the lowest prices in the county on many items, especially blue jeans, Tippin recalled while sharing such stories as the time some local boys robbed the store but didn’t think their plan through so well, as their footprints proved easy to follow in new-fallen snow.

Tippin also shared tales of two notable New Maysville doctors -- Dr. William Long, who came to town in 1834 in what he recalled as “the dead of winter” when the area was still “a howling wilderness” that required him to blaze trails through that dense wilderness as the only way to get around to visit patients, and his son, Robert Long, who practiced medicine in New Maysville for 10 years after serving in the 78th Indiana Infantry during the Civil War.

Dr. William Long, who practiced medicine for nearly 40 years, was a giant of a man in the mid-1800s, standing over six feet tall and weighing more than 300 pounds, earning the distinction in the 1879 “Putnam County Atlas,” Tippin said, “as the largest man in the county.”

His son, Dr. Robert Long, amassed a large fortune by investing in real estate and moved to the Indianapolis suburb of Irvington in 1875. He later donated $345,000 (reportedly $10 million by today’s standards) for the creation of the Robert W. Long Hospital on Michigan Street in Indianapolis.

When he died in 1915, Tippin noted, Dr. Long left behind specific instructions for a huge monument in the New Maysville Cemetery that Tippin said includes “27 yards of concrete ... I measured it one time.”

The Long story, however, isn’t complete without the mention of Robert’s widow Clara, who visited the cemetery annually until 1945 with her driver known as “Big John.”

“People who lived back then have said it’s exactly like ‘Driving Miss Daisy,’” Tippin said of the Oscar-winning movie about interaction between a wealthy old woman and her driver.

Turning his attention to Belle Union, Tippin told how for a time there were two Belle Unions after dueling plats were filed at the Putnam County Courthouse on the same day, six hours apart in 1873, creating a “very confusing” situation.

No one is really sure where the name Belle Union comes from, Tippin said, although one theory is because of the presence of the Union Valley Church and a family named Bell (but with no “e” on the end) who lived nearby.

The locations grew to be known for a time as “North Belle Union” and “South Belle Union,” the latter of which was sometimes referred to as Bobtown or Bob’s Corner in reference to McCammack, Tippin related.

“Some suggested to keep them straight they should be called ‘Dogwaller’ and ‘Hogwaller,’” the county historian noted rather ignominiously to laughs and groans from the museum audience.

The Greencastle Banner carried a story on the situation in its Feb. 27, 1873 edition, Tippin said, noting that “the site for a new town has been surveyed one mile north of Belle Union in Jefferson Township. At present it has one store and a blacksmith shop, but expects soon to need more.”

Sharing several news clippings he’s uncovered during his elaborate research, Tippin offered an interesting one from an 1880 Greencastle Banner. It noted that “Constable Hiram Cox is said to have arrested the only sober man in Belle Union the other night on the charge of being drunk,” the newspaper obviously taking some liberties with journalistic facts.

After audience reaction died down, in perfect comedic timing Tippin suggested, “They must have been enjoying themselves in Belle Union in those days.”

He also shared the story of a pool hall about to open in Belle Union when in Carrie Nation-like fashion the women of the community rose up and decided “there was too much drink going on and took everything to McCammack’s cabin and locked it up” before the pool hall could ever open and all that terrible, terrible trouble 16 numbered balls might cause could take root.

Longtime Belle Union resident Clyde Stringer added to that anecdote, noting that “the pool hall got dynamited and never did open up.”

Moving on to the tiny towns of Brunerstown and Keytsville in western Madison Township, Tippin noted that “if one lived in this rural area 100 years ago you would not need to come to the big city very often” as three general stores were within about a mile of each other with one each in Keytsville, Brunerstown and Vivalia.

Besides that, two or three huckster wagons were operating in the same area, taking goods to homeowners along their route well into the 1940s or later.

Keytsville was also noted for having a dance hall, Tippin said, showing a 1931 news article in which a Reelsville man was stabbed while trying to eject an unruly customer there.

In another September 1931 news brief, it was reported that Keytsville had beaten Four Corners 61-4 in a recent ball game. Whether the sport was baseball or basketball remains uncertain since nothing but the score was reported, although either way it was certainly a convincing small-town thrashing.

Next up is Tippin’s presentation on the tiny towns of Pleasant Garden, Montgomery Chapel, Darter and “the county that almost was” in a program set for 6:30 p.m. Thursday, April 25 at the museum.