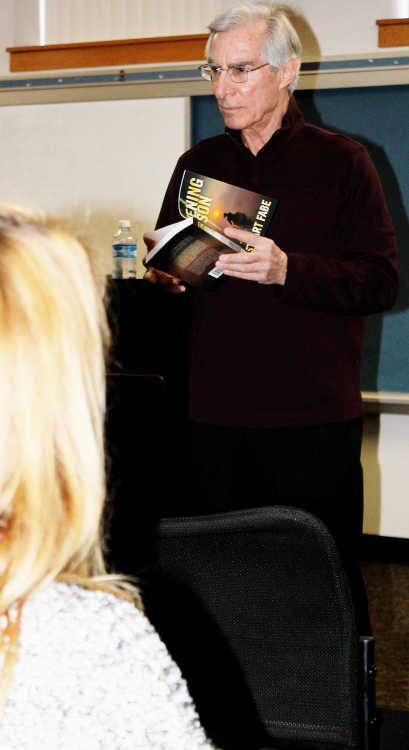 Out with his fifth novel and the fourth in his Clay Arnold series, local author-artist-photographer-bon vivant Stuart Fabe has reached into his past for the setting and mood of his latest thriller, “Evening Son.”

Fifty years ago, as Fabe recalled for his Putnam County Public Library Author’s Talk audience earlier this week, he spent the first of two summers as a counselor at a northern Wisconsin boys’ camp.

Last summer Fabe ventured back to Douglas County, Wis., and those clear waters of the Bois Brule River that Fabe said so long ago “imbued me with a sense of wonder and belonging.”

It was there he not only enjoyed fly fishing and canoing again like it was yesterday but reconnected with a buddy he’d not seen in 30 years. A novel combination. Literally.

“All of these wonderful memories came flooding back,” Fabe said, speaking almost reverently about the locale, noting he could “paddle along and see long grasses like hair moving in the current ... the smell of the pine needles ... I wanted to make it the setting for ‘Evening Son.’”

In past novels, the hard-edged Arnold has gone so far as to execute several domestic terrorists and right-wing racists who he felt deserved it. But in his recent books, Fabe has allowed Arnold (his hero/alter ego) to shed much of that vigilante violence for more historic or political page-turning quests.

In “Evening Son,” the story picks up the main character and his nine-year-old son Brodie some 10 years after Fabe’s previous novel, “Evening Code.” Fly fishing in the river, they encounter vacationing President Jake Horvath, who invites Brodie to fish with him. Moments later they disappear a couple hundred yards downstream, snatched by Russian agents.

And that’s when, Fabe suggested “the moose poop hits the fan.”

“Russia seemed like a really good choice (for the villain),” Fabe said. “For crying out loud, we grew up with them as the bogeyman. Can’t we just keep them there?”

That scene turns “Evening Son” into a “page-turning thriller to find out where they are and how they (Arnold and new character/old friend and ex-Marine Banks) get them back,” Fabe advised.

The author seems to enjoy creating characters and making them grow. He also embraces the process of writing, still intrigued at being able “to sit down with a blank slate and see what comes out.”

So how much of Clay Arnold is in Stuart Fabe or vice versa?

Obviously the violent nature of Arnold isn’t something you’ll find in Fabe’s make-up.

“I haven’t killed anybody in a long time,” he joked, gesturing toward a woman in the audience while noting most of his female readers have told him that not many women would marry a guy like Arnold, whose rage comes from the murder of his first wife.

And that feedback is part of the reason the main character is evolving from 100 percent avenging vigilante to a husband-father-vigilante role.

“I love the Clay Arnold character,” Fabe has said. “But no, I’m not an avenging vigilante.”

And who would he see in the movie version of his story, should that come to pass?

“I definitely see Sam Elliott as Banks,” he says of the mustachioed character actor synonymous with he-man, cowboy-centric roles as well as the familiar voice-over for the “Beef .... it’s what’s for dinner” commercials.

“I don’t know,” Fabe says, rising up on his tiptoes, as if to suggest he might be big enough to tackle the job. “I’m not ready to give that up yet.”

So where do Arnold and Fabe go from here?

“I’m not ready to think about that yet,” the novelist says, noting that he has the lifetime of his characters to continue their development and put them in enough peril to feed his stories.

And as he ponders his next installment in the Clay Arnold series, Fabe muses that rural Indiana has been a great place to nurture his burgeoning literary talents. After all, he resides in the cherished Putnam County countryside near Brick Chapel with partner Marla Helton, “two dogs, one cat and 11 chickens” as his book bio notes.

“That’s the good thing about being in rural Indiana in the winter,” Fabe assured, “after you bring in the firewood and feed the chickens, you can go upstairs and write.”

Nothing so avenging about that, now is there?