Levi Yowell to step in as SPHS principal July 1 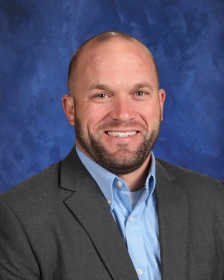 Current North Putnam High School Assistant Principal Levi Yowell will soon have an opportunity to make a difference for South Putnam students after he transitions into a new administrative role later this year.

During its regular meeting held Wednesday evening, the South Putnam School Board approved hiring Yowell as the new principal at South Putnam High School in a unanimous vote.

He will succeed Mike Schimpf, who tendered his resignation to Superintendent Bruce Bernhardt in January and will leave South Putnam at the end of the school year to pursue another position. Yowell is set to come into his new capacity effective July 1.

Yowell, 39, grew up for a short time in West Terre Haute before his family moved to Muncie, where he graduated from Muncie Central High School. He then went on to earn a bachelor’s degree in business from Olivet Nazarene University in 2003.

Prior to becoming assistant principal at North Putnam High School in 2014, Yowell held administrative positions at Washington High School and at South Vermillion High School from 2011 until he came to Putnam County.

Yowell has made strides at North Putnam in the five years since, and is currently working on coursework in educational foundations (EdF) from the Bayh College of Education at Indiana State University with the end-goal of earning a doctorate.

During a call from the Banner Graphic Thursday morning, Yowell said that the decision to come to South Putnam was a “no-brainer,” because it would allow him to stay in Putnam County and continue to grow as an educator.

“Putnam County has wonderful parents, kids and teachers, and this will give me the opportunity to stay here and build a good professional network,” he said. “I have sought being a principal and to lead my own building, and I’m excited to be a part of South Putnam in that capacity.”

Yowell said that staff at North Putnam, especially Principal Jason Chew and Superintendent Nicole Singer, have been supportive of the transition and his desire to grow as an administrator. He added that familiarity with both North Putnam and South Putnam has made the process “easier and smoother.”

“I’m fortunate to be working with the staff, Mr. Bernhardt and the board at South Putnam,” he said. “My colleagues at North Putnam have supported me along the way, and Mr. Chew and Dr. Singer have been good mentor figures to me. I’m thankful for how they have allowed me to grow as a leader while I’ve been here.”

Concluding his thoughts on the move and the anticipation he has for the future, Yowell affirmed what was most important to him as a husband and a father, as well as an educator coming into a new leadership role.

“I’m thankful to the Lord for giving me this opportunity, and for the support I’ve had from my wife and children,” Yowell said. “Being a school administrator is not just a job; it’s a passion that is time-demanding, and I appreciate the confidence everyone has put in me to lead.”