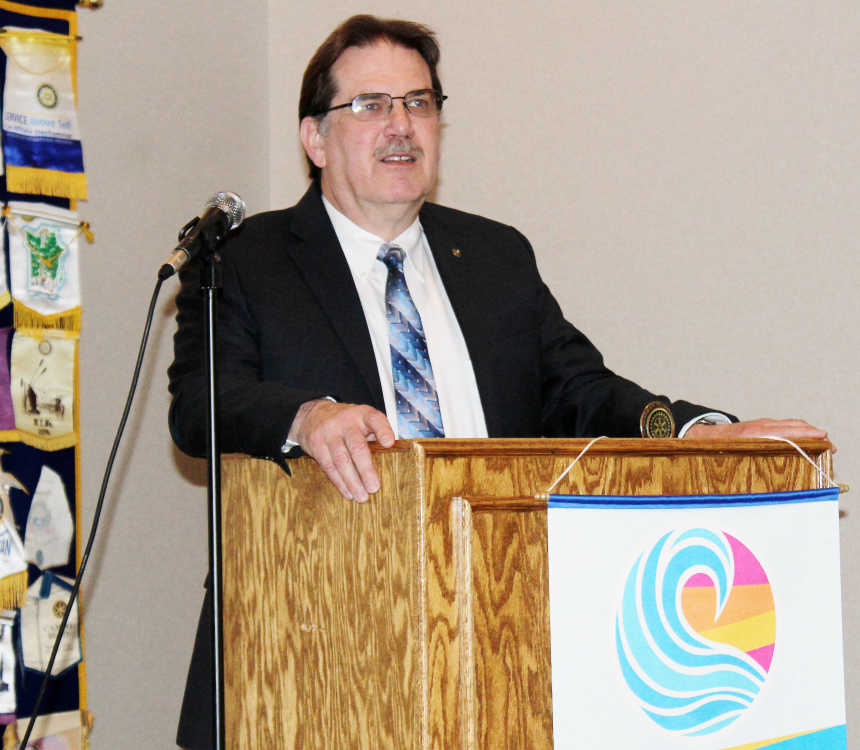 Looking ahead at 2019 as well as looking back on the accomplishments of 2018 during his speech at the Inn at DePauw, Dory asked for “everyone’s patience and understanding” over the next few months.

“There will be a lot of construction going on around the community,” he said, indicating the current inconvenience on the city’s East Side is just the beginning.

Dory highlighted the Indianapolis Road project, noting that utilities are being relocated in preparation for the roadwork.

“Later this summer, the community will enjoy a new three-lane road with sidewalks on both sides,” the mayor said. “We appreciate the patience of our neighbors and businesses in the construction area.”

He also expressed appreciation for community partnerships that have helped make Greencastle great.

“I would first like to thank our City Council, clerk-treasurer, our department heads, our staff, volunteer board members and our partners throughout the community,” Dory said. “Greencastle is truly a great community where people step up to meet the needs and aspirations of our fellow citizens.

“I cannot possibly list all of the individuals and organizations that contribute time, talent, treasure, collaboration and partnership to make Greencastle a great family-oriented community and a great Midwest college town.”

“As a community, we continue to partner with DePauw on a wide range of projects, from investments by alumni to partnerships with students. Judson and Joyce Green and Lee Tenzer continue to invest in our downtown. Mr. Tenzer has also recently taken over the golf course, now Tiger Pointe Country Club, and has projected great things, including a new clubhouse.”

DePauw will be making “significant improvements” to its campus, the mayor noted, including a new heating and cooling system and a new dormitory that signals a start to the reconstruction of South Quad. In doing so, the university is funding improvements to the city storm sewer system in the South End, as well as to Olive Street.

Overall, the mayor talked about the city departments as a “great team to work with” and addressed the accomplishments of each in 2018 and some of the expectations for 2019.

Financially, Dory said, “through the work of our department heads and our clerk-treasurer, we ended the year on a sound financial footing.”

He noted that the city was able to benefit in 2018, for the third year in a row, from the Public Safety Local Income Tax, adding however, that “in 2019 and 2020, revenue from that funding source will decline due to the county retaining more at its level. Regardless, the funding continues to allow us to support our public safety forces.”

A few key highlights of the city financial picture, Dory pointed out, are total receipts of $24.1 million in 2018 with total expenditures of $20.7 million, resulting in a cash balance increase of about $3.4 million.

“While our cash balance increased, some of the increase was due to grant/project funds not fully spent, modest increases in our utility funds and TIF revenue accumulating for future projects,” the mayor added. “Our operating accounts, such as our general fund, tend to remain very tight due to limited tax revenues that fund these accounts.”

He also pledged that the city will continue to promote housing opportunities “despite not being the only community in central Indiana with similar needs.”

The city issued 132 building permits -- including 20 for new single-family homes -- during 2018, representing a total new investment of more than $8.8 million.

“We are actively working to promote housing development,” Dory assured. “We still have unmet single-family housing demand in the city and county. Over the course of 2018, we averaged only 123 listings per month on MIBOR. That number dropped to less than 100 in February of this year.”

Greencastle provides a wide range of services to its residents and business community, the mayor said, offering some statistical highlights from city departments.

The fire department responded to 1,425 requests for assistance during 2018, which Dory said was a 30 percent increase in runs, and will have some new equipment on the way.

In November, the Board of Works ordered a new pumper truck at a cost of $592,000, he noted, and in 2021, the city is scheduled to replace the aerial tower truck at a projected cost of nearly $1.5 million.

He noted that Public Safety LIT funds “will allow us to make these investments, despite being significantly reduced by the County Council in 2019.”

Meanwhile, he said City Police officers responded to 6,405 calls for service and made 1,434 traffic stops while continuing to work on drug-related issues, including 64 drug possession arrests and an additional 93 related arrests. Officers also responded to 21 alcohol- and drug-related overdoses.

Significant investments were made on city streets -- which the city is responsible for 48.14 miles of roadway -- to the tune of 8,800 linear feet of paving and an additional 10,700 linear feet of preventative maintenance.

“Final determination will be made after receipt of bids and determination of any in-house work,” the mayor said, adding that “in part, these projects will be supported by the new local license plate fees that are now being received by the city.”

In 2019, INDOT will be doing resurfacing work on U.S. 231 through the city, Dory pointed out. “The existing pavement is simply not going to last until major reconstruction in 2021,” he said.

“These investments make our community more accessible for individuals and families, residents and visitors.”

“In closing,” the mayor said, “I extend my annual invitation to you to participate and play a role in creating and improving our community.

“Thank you for your support during the last three years in my service as your mayor. More importantly, thank you for the support of the men and women that work diligently to serve the citizens of our community.”