Evening of new art April 26 inspired by the Nature Park

The Greencastle Arts Council invites art lovers to the second annual Bonne Soirée, a special event at Peeler Art Galleries of DePauw University on Friday, April 26 from 7-9 p.m. The theme of the evening is regeneration and will include new works by local artists inspired by the DePauw Nature Park.

Also on tap for the evening is an exhibit of eight new visual art works, presentations of original music and literary works, hors d'oeuvres and desserts by Almost Home, cash bar, live music, and an opportunity to explore exhibits currently on display at Peeler. 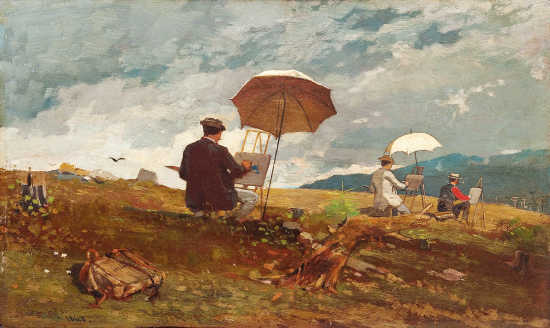 Winslow Homer's 1868 oil painting, "Artists Sketching in the White Mountains," captures the idea of inspiration from nature which will be demonstrated by eight local artists showing new works at Bonne Soirée on Friday, April 26. The event being put on by the Greencastle Arts Council in support the local arts community.

Eight visual artists converged at a single point in the Nature Park forming a circle facing outward so that together their works will represent a 360-degree view of the quarry. Participating artists are Holly Simms, Alex Hirt, Matt Reese, Kathleen Kirkpatrick, Toni, Ridgway, Natasha Vidger and DPU students Daniela Chaparro and Emily Graves.

Art works will be sold by silent auction during the Soiree, with 50 percent of the proceeds going to the artists and the balance to support the Greencastle Art Council's mission to support the arts and artists in Putnam County.

The Arts Council selected the quarry for inspiration, not only for its beauty and variety, but also for its uniqueness as an area utilized by man disrupting the flora and fauna, while also bringing income and progress to Greencastle. Over time, the site has become a different kind of beautiful -- a destination for recreation and meditation and an area for research as nature reclaims the land.

Guests may make reservations online at www.greencastleartscouncil.org or by contacting Lynne Tweedie at 720-8058 or lynne_tweedie@hotmail.com. Reservations are asked by April 20.