With most of its members absent during its monthly meeting, nothing in the way of approvals or considerations were made by the Putnam County Public Library Board of Trustees Wednesday evening. 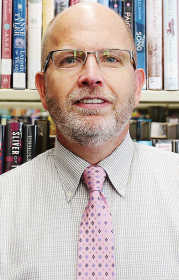 Though no action could be taken, Treasurer Lisa Barker, Board President Alan Zerkel and board member Shannon Green listened as PCPL Director Brian Briscoe provided updates regarding the library’s technology services during the short session.

Briscoe related that he and staff have seriously considered transitioning the library’s online functions from the Polaris integrated system to one supported by Evergreen. Both perform the same function with cataloging the library’s content and making it available online.

Briscoe said Evergreen could be more beneficial to the library’s patrons through making interlibrary loans smoother, as well as having its online sources easier for the public to access. However, he said the system in general would be the same, and that the focus was on maintaining quality and accessibility.

“We’re considering the benefits with Evergreen, but we’re being very deliberate going through and making sure we’re not really downgrading,” he said. “A lot of our staff have asked about it, and it might be better in the long run.”

Barker added that the switch could help PCPL extend beyond Putnam County to those who may come in from outside. She related that patrons from Hendricks County are unable to get a free library card because PCPL is not in the same consortium supported by Evergreen. If the change was made, she believed the library could serve them better.

Briscoe also said proposals to waterproof and revamp the hardware for the library’s elevator were being considered. He added that a claim will be filed with the library’s insurance company regarding recent flooding issues. These were complicated by bills sent from Kone, the company which installed the elevator, for initial fixes.

While the elevator’s flooding problem goes back to last September, Briscoe told the Library Board in January that he had disputed the bills, citing a lack of performance. Kone then assured Briscoe that personnel would be sent to clean up the elevator’s pit.

When asked by the Banner Graphic if further action had been taken on the elevator, Briscoe said it had been cleaned, and that it would pass an inspection by the state. He also said that the bills sent by Kone remain unresolved, hence why an insurance claim is to be filed.

In another related issue, Briscoe said that the library would work with 12Point Technology for its online services. It will replace Telimagine, PCPL’s old vendor which handled a recent server outage between the end of last year and into 2019. Briscoe also related that a new server and backup system had been installed.

In her financial report, Barker said the library’s budget is “on track” and “in good shape” so far this year, despite unexpected expenses covering the issues with the old server.