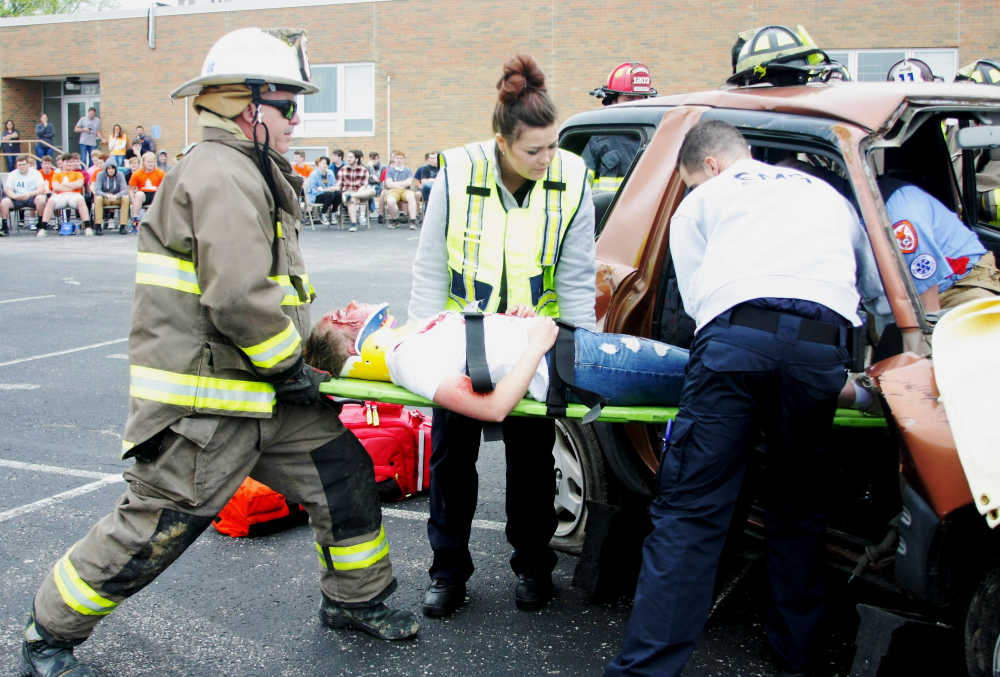 Emergency responders from various agencies conducted a mock crash for students at North Putnam High School Tuesday. A staged accident scene with student actors was conducted on the parking lot on the south side of the school.

Students were seated in bleachers and chairs to allow them to view the activity as if it had happened on any highway. Two vehicles, provided by Seniour’s Towing, were staged in a head-on crash. Three students in each car were positioned in various states of injury.

Personnel from Roachdale, Bainbridge, Clinton Township, Floyd Township and Russellville fire departments worked to triage patients and extricate them from the cars. They were soon assisted by members of Putnam County Operation Life and PMH ambulance services to treat the injured. 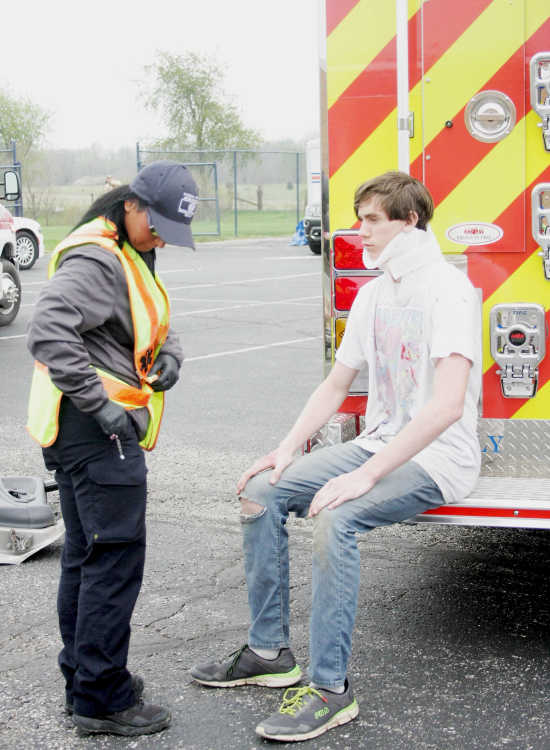 Police officers from Bainbridge, Roachdale and the Indiana State Police then assumed the investigation. They determined the crash was caused by a driver who was texting while driving. However, she struck a car being driven by someone under the influence of drugs. Officers quickly determined both drivers would need to be arrested.

The highlight for the students was the arrival of a St. Vincent Stat Flight helicopter to transport the most critical patient. The helicopter landed near the parking lot, which gave the students the opportunity to view the process of loading the patient for transport.

The last activity, which perhaps captured the most attention, was the arrival of Putnam County Coroner Dave Brown to pronounce one of the victims deceased. He then summoned Servies and Morgan Funeral Home to transport the victim. The victim was loaded into their hearse and transported from the scene.

The radio communications were broadcast from the parking lot through a sound system provided by Russ and Shiloh Evans of Digital Sounds DJ. A pre-recorded “dispatch” of the crash was made by Putnam County Central Dispatch. Once the scenario began, ISP Master Trooper Charlie Boller played the role of dispatcher.

Upon concluding the scenario, students were dismissed to the gymnasium for a follow-up convocation. Principal Jason Chew provided opening remarks before turning the event over to Indiana State Police Sgt. Cory Robinson.

Sgt. Robinson gave the students some background on the event, stating why the responders and local school corporations continue to provide these events.

“Several years ago, we experienced multiple serious car accidents involving students from local schools,” he said. “These accidents seemed to occur near prom season, so we wanted to try to do something to hopefully encourage you to make good decisions while driving.”

Sgt. Robinson also explained that he and paramedic Zach Bowers stage the event once per year at a high school, rotating between the high schools in Putnam County on an annual basis.

“If a student attends the same school all four years, then that student will have the opportunity to observe the event,” Robinson said before turning the stage over to Putnam County Prosecutor Tim Bookwalter.

Bookwalter showed the students a series of photographs of prior accidents involving actions by a driver which required criminal prosecution by his office. He gave accounts of each incident to include meetings with victims’ families.

“Here’s the thing. I don’t care who you are. I don’t care if you are an ‘A’ student,” he said. “If you take someone’s life, you will go to prison. The law demands it.”

Danie Allen was the final speaker of the day. Her son, Aaron Hess, was a North Putnam student who lost his life in a motor vehicle accident in June 2017. Many of the students wore their “#14 Strong” T-shirts in support of Allen.

Her remarks had the complete attention of the entire gymnasium. She lamented that she was still seeing poor driving by students on their way to school in the morning, and that she also watches with concern as students “race” to be the first ones to leave after school.

When she concluded, the student body showed its appreciation for her courage by giving her a standing ovation.

Principal Chew wrapped up the afternoon’s events with some final comments before releasing the students back to class.