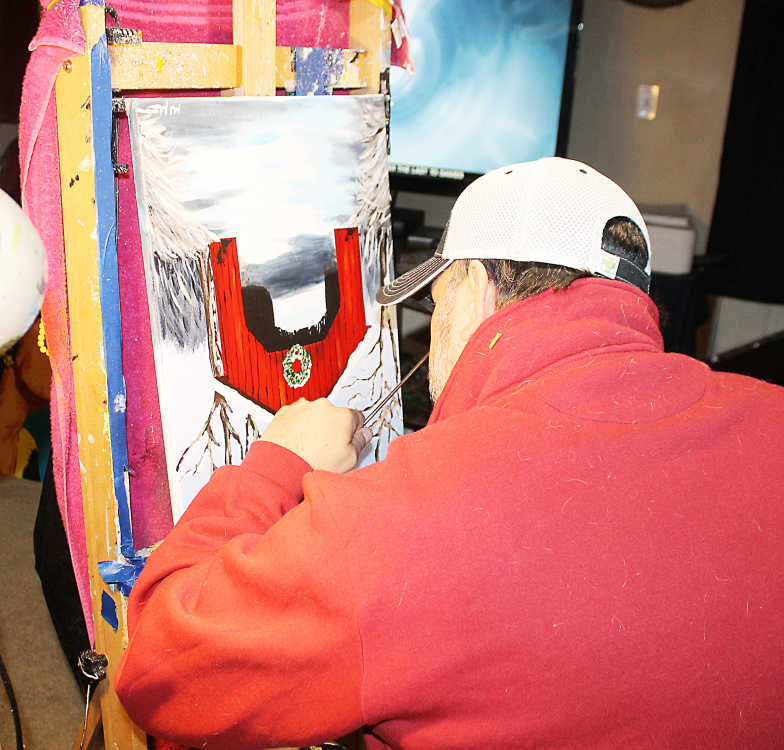 To anyone who knew Rick Johnston before May 5, 2015, that might be the most striking difference.

He works in silence.

This is a man who was never silent — always talking, constantly in motion, preferably with some high-quality tunes in the background.

But that’s the funny thing about a neurological disorder -— we can call it a stroke though that’s not technically accurate — it will change a person.

Want to talk about change? The 49-year-old Heritage Lake resident and Putnam County lifer knows a thing or two about change.

Had to be re-taught how to walk, even how to speak.

Those aren’t the changes we’re here to talk about though.

Instead, this is the story of a man consumed, like so many of us, with working hard and making a buck, who one day had a huge roadblock thrown in his way. Couldn’t make that living any more. Couldn’t even enjoy his newfound “free time.”

Rather than driving him into darkness, Johnston’s disorder has revealed to him colors, both literal and figurative, he didn’t notice before.

Now known beyond Putnam County as The Bearded Painter, Johnston is sharing those colors with the world around him.

It’s a journey Johnston doesn’t try to explain beyond a simple maxim he repeats often:

When God closes one door, he opens another. You just gotta look for it.

That, in a nutshell is The Bearded Painter, the man Rick Johnston is glad he’s become. 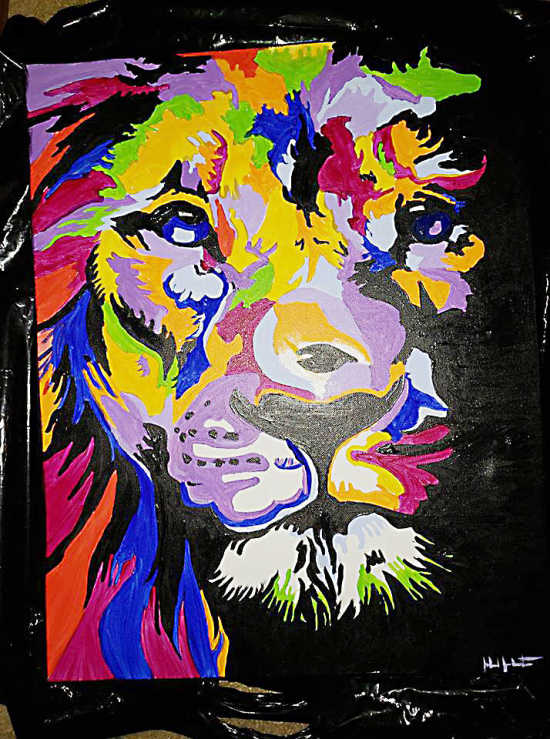 Among Johnston’s hundreds of creations are “A Lion in Wait,” which is now retired.
Courtesy photo

‘I can’t draw a stick figure’

On May 5, 2015, Johnston, then a supervisor at Carrier in Indianapolis, was working for the 72nd straight day. He began feeling sick and headed to see the nurse when he blacked out.

Johnston was left with more questions than answers. He didn’t suffer a stroke but his brain seemed to be telling his body he did. 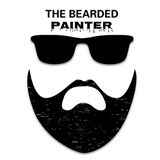 Rick Johnston’s work will be on display during First Friday this evening in a showcase from 5-8:30 p.m. at 15 W. Franklin St., Greencastle.

For all intents and purposes, it might as well have been a stroke. He couldn’t walk, couldn’t speak. The right side of his body was completely numb.

He was left with migraines, vertigo and light sensitivity — all of which still affect him almost four years later.

So began a long road to recovery. Johnston had to learn to walk again. He can do it now, albeit with a cane.

Speech was yet another mountain to climb. To help him on this journey, Johnston was assigned IU West speech pathologist Shelly Hunt.

“We all have angels and she’s mine,” Johnston said, noting that Hunt has been working with him since the very beginning of his illness.

Those weren’t easy times in the very beginning. Johnston describes himself as bitter, ready to quit on his rehabilitation.

“I gave her every opportunity to quit on me. I tried,” Johnston said. “It’s not often you meet someone more stubborn than you. But she was. She dug in and wouldn’t quit on me.”

Stubborn or not, Hunt had to find a way to reach Johnston, especially as he struggled with apraxia, a frustrating disorder in which a patient understands what he needs to do — can see the right word in his mind — yet can’t get the message from his brain to his mouth.

“There’s nothing more frustrating than wanting to say ‘glass,’” Johnston says. “And you know it’s a glass, but you say ‘tree.’”

One step was through word association. To say Johnston loves music wouldn’t do it justice. Obsessed comes closer to the mark for a man who can speak at length of artists as far-flung as Jeff Beck, Marty Robbins and The Clash.

So musical references became a shorthand for the things Johnston wanted to say but couldn’t quite get to his mouth.

The real breakthrough came with a different sort of art altogether. One day about two years after symptoms started, Hunt suggested that Johnston consider painting as a way to exercise a different part of his brain.

Johnston often recalls his response with a laugh: “I can’t draw a stick figure.”

He let Hunt know how insane he thought the idea was.

“You’re crazy. I can’t paint,” he recalls. “I was painting abstract long before it was popular.”

However, simply to prove his therapist wrong if nothing else, Johnston got out some of daughter Lauren’s old poster paints and composed a landscape filled with rich colors.

“Shelly has the first one I painted. I took it to her just out of spite,” Johnston said. “And she absolutely fell in love with it.”

Whatever Johnston’s opinion of the merits of his first piece, he absolutely fell in love with painting. He suddenly had something into which he could pour himself.

“Once I started, just couldn’t stop,” he said.

Unlike his working days, Johnston’s pursuit of painting did not keep him away from home. It did, however, cause some different consternation for wife Cammie.

“This went on for a year,” Rick recalled. “I had almost 400 canvases in the living room. Needless to say, Cammie wanted her living room back.”

That’s when Lauren, whose paints had started this whole obsession, had an idea. 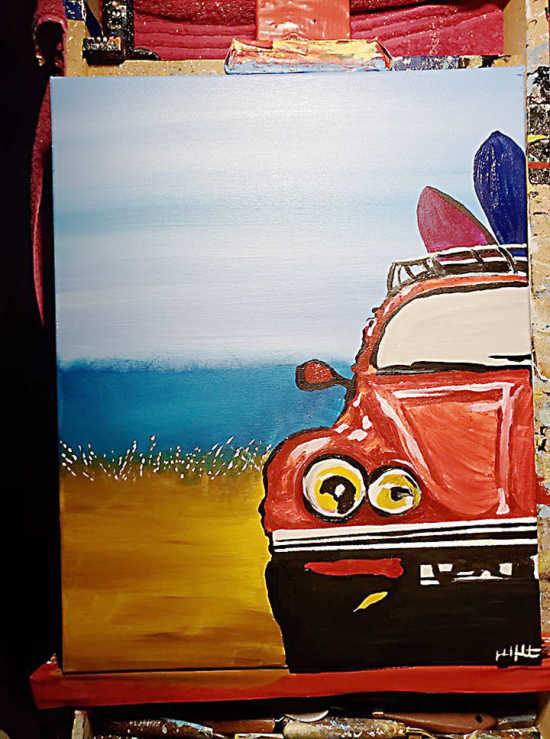 “Retro Living” is among the feelings by Rick Johnston that will be available during a First Friday Showcase at 15 W. Franklin St.
Courtesy photo

‘The Bearded Painter’ is born

It started as a simple Facebook group. Lauren coined the title “The Bearded Painter” because it was a simple, accurate description of her dad.

The page was a simple way to share Johnston’s paintings, first with old friends and later with brand new ones.

However, it’s grown into something of a sensation. People kept joining, kept loving his work, kept ordering paintings.

When Johnston’s story was shared more and more, and Indianapolis television station took notice, then Facebook itself.

Johnston recalls getting a call from Facebook founder Mark Zuckerberg himself. He laughed and hung up on the prankster.

Only it was no prank. Zuckerberg finally connected with Johnston on Messenger, letting him know that the social media behemoth wanted to help tell his story.

A producer for Facebook named Julie Putnam had seen Johnston’s interview on WTHR. Besides being intrigued by his story, the Notre Dame grad loved Johnston’s Fighting Irish hat.

With the Putnam and Notre Dame connections in place, Putnam felt the need to do a video on Johnston.

“We gotta do this story,” she told Johnston.

About the same time that the Facebook video went public, so did a story in People magazine.

In the weeks since, Johnston has seen demand explode. The Bearded Painter now has more than 6,000 followers.

He has sent paintings to England, Germany, Iceland “and I have hit 39 states,” he adds.

It doesn’t go to his head, though. Instead, Johnston takes time as his paintings dry to make note of the kind words, responding to each positive comment.

“Why wouldn’t I take the time to respond to these people ... every single one?” he asked. “I want to reply and I’ve been able to connect to people all over the world.”

The Facebook interactions also cast a positive light to a medium that is increasingly used for negative purposes.

“I get to see social media used in a positive format,” Johnston said. “We don’t see a lot of that now.” 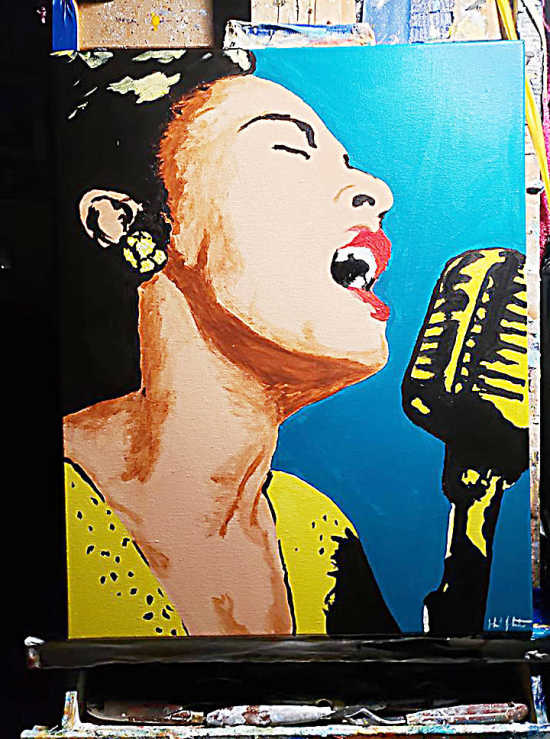 ‘No better feeling than paying it forward’

Forced into early retirement and suddenly discovering a newfound talent, Johnston could have looked at painting as a meal ticket. That isn’t the case.

Instead, he’s used the proceeds from the sale of paintings to benefit causes close to his heart.

There has been no bigger beneficiary than New Life Connections, a local non-profit with a faith-based approach to addiction services.

In December, Johnston had the first formal showcase of his art at a fundraiser for New Life Connections in Ladoga.

“There’s no better feeling than paying it forward,” he said.

Paying it forward has become the inspiration for much of what Johnston does now. He’s joined 100-Plus Men Who Care as another way of giving to the community he loves.

“I have been blessed with the avenue now. What a great feeling to go to bed every night knowing you get to make a difference,” Johnston said.

“And to hear someone say, ‘You’re an inspiration.’ I by no means think I’m an inspiration but I’m not so naive to think that I don’t inspire some people.”

The hope is that the inspiration will spread further on Friday evening with a showcase of Johnston’s work during First Friday on courthouse square in Greencastle. 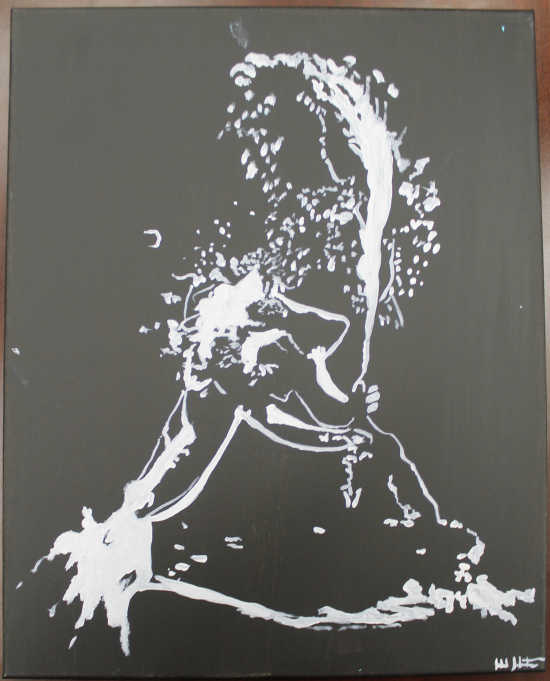 Among Rick Johnston’s paintings about music is “Quit Holding Out and Draw Another Breath,” a tribute to “London Calling” by The Clash.
Banner Graphic/JARED JERNAGAN

‘It saved my life’

Besides the effect he tries to have on his community, Johnston also recognizes the positive impact his gift of painting, and probably even his illness, have had on his life.

“It saved my life. I was jaded and bitter,” Johnston said. “Pride is a sin and I was chock-full of it. Shelly gave me hope because she wouldn’t quit on me. Then gave me direction when she suggested I paint.”

Gone is the man who spent his life working. He can stop, see the colors, both in his mind and in the world.

If Johnston has any regrets, it’s that he didn’t find his path sooner. He lost both his parents in 2016, before he became the man he is now.

“I say you don’t get do-overs, but I did,” Johnston said. “Because I don’t think I was a good person. I don’t know that I am now, but I try to get better every day.”

To that end, he keeps a couple of phrases in mind.

“Two things I say every day — ‘Victory through adversity’ and ‘I want to be a better me than I was yesterday,” Johnston said. “If I keep doing these two things, hopefully people will see what I do as raw honesty and a chance for me to repay the kindness.”

And this point, it’s simply about enjoying the ride, not explaining anything.

Johnston paints with his left hand, which is his non-dominant side. He also often composes the paintings upside down.

He can’t explain either phenomenon and he no longer cares.

“I used to try to explain to people why I paint, how I paint,” Johnston said. “I don’t do that anymore.”

All he has to do is paint. Through this avenue, still relatively new, the rest seems to take care of itself.