Mark McCoy to step down as DePauw president 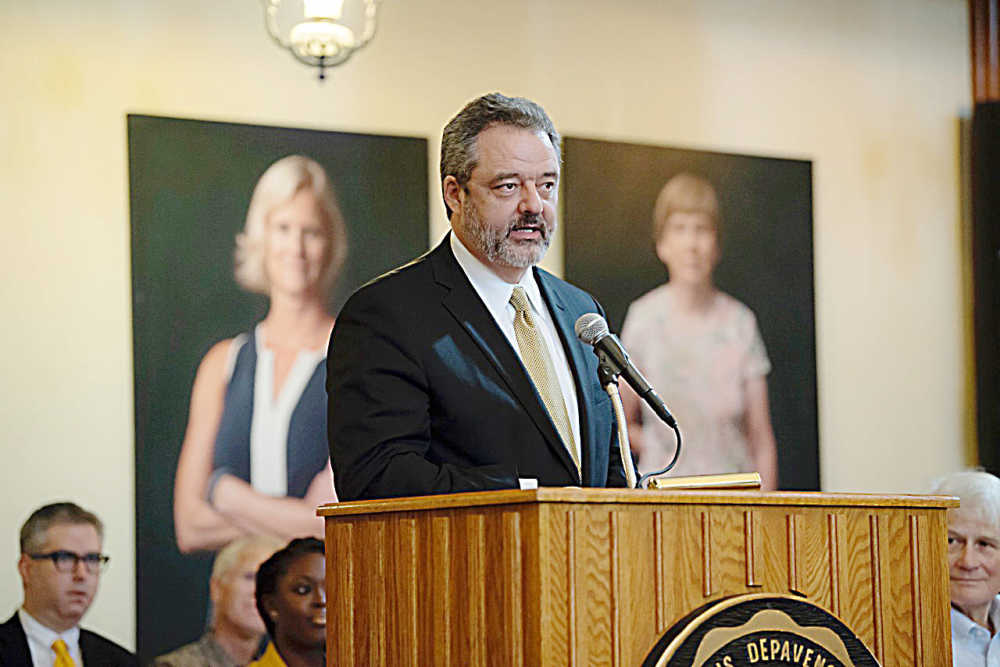 Having served as president of DePauw University since 2016, Mark McCoy will step down from the position following the 2019-20 academic year.
Courtesy photo/DePauw University

DePauw University President Mark McCoy will step down at the end of the 2019-20 academic year, having served in that role since 2016.

The university announced Monday morning that its board of trustees recently accepted McCoy’s resignation, and that a search for DePauw’s next president is now in the beginning stages.

“I have loved my time at DePauw as dean and president,” McCoy said. “I remain in awe of our faculty, staff, students and alumni and will treasure the relationships developed here for a lifetime. I am also proud of the administrative team and our focus on building a strong foundation for the continued investment in our student experience, people and campus.”

McCoy added that he was committed to working with the board of trustees, faculty and alumni to find his replacement, stating that he was ready to help “equip the next president of DePauw to capitalize on the progress we’ve made and the foundation-building we’ve undertaken together.”

McCoy will continue his stead as president into next year while the board of trustees develops a transition plan and conducts a national search for who will succeed him.

“The trustees accept Dr. McCoy’s resignation with regret and deep gratitude for his selfless contributions to DePauw,” said Kathy Vrabeck, who chairs the board of trustees. “In partnership with the board, he has undertaken necessary strategic change to strengthen our academic and financial future, while launching critical, ongoing initiatives to ensure student well-being and success.

“He will soon oversee the completion of what promises to be the largest fundraising campaign in DePauw history, and his leadership will remain critical in the coming year as the university makes significant investments in a new first-year residence hall and plans for renovations to the library.”

McCoy began his administrative tenure at DePauw as the dean of the school of music, during which he helped launch the 21st Century Musician (21CM) Initiative, an entrepreneurial arts program that encourages classical music students to be flexible and “find musical venues and outlets in addition to traditional performance spaces, develop new audiences and utilize their music innovatively to impact and strengthen communities.”

After he was appointed president in 2016, McCoy also led the unique adoption of the Gold Commitment, which guarantees that every DePauw graduate will find a measure of success within six months after graduation.

McCoy continues to oversee the developing Campaign for DePauw, which will direct gifts toward new and renovated buildings on campus, as well as focus on stated goals of strengthening academic life and further enriching students’ experience.

He also has tried to build upon the idea of the “communiversity,” which emphasizes a positive and productive relationship between DePauw and Greencastle as a whole. While McCoy did not coin the term, he brought it with him to DePauw and first used it during his time in the school of music, such as when he helped welcome world-renowned cellist Yo-Yo Ma to Greencastle to cut the ribbon on Music on the Square, the university-owned music performance space in the heart of downtown.

Through much of his tenure as president, McCoy continued to preach communiversity, with the theory that “community + university = an expanded universe.”

While McCoy’s efforts on this front were successful and he did seem to improve the university’s relationship with the wider community, he has not seemed to enjoy the same popularity on campus as predecessor Brian Casey, who served at DePauw from 2008 through 2016.

McCoy has come under fire at various points during his presidency for a perceived lack of leadership amid financial and social shifts the university has faced.

In April of last year, his administration faced controversy after a string of anti-Semitic, homophobic and racial slurs were found written on and near campus. DePauw students staged a protest during an Ubben Lecture being given by actress Jenna Fischer, and staged another at a press conference.

McCoy was grilled and constantly interrupted by the students, saying that, “We are committed to addressing these issues. DePauw has made so many efforts to address this and has still fallen short.”

Then in November, DePauw faculty approved a resolution declaring a vote of no confidence in McCoy’s conduct, the first and only instance of such in the university’s history. Approximately 31 percent of the faculty voted in favor of the measure, while 22 percent opposed it. The remaining either abstained or did not vote at all.

The debate cited concerns regarding the university’s financial stability and cuts to employee health coverage, in addition to disappointment in how the administration addressed the slurs. The resolution concluded that, “his continuation as President threatens the reputation of the university and severely compromises the institution’s viability.”

However, the board of trustees maintained trust in McCoy, expressing in letter to the faculty that the vote was “unwarranted.” Procedurally, the resolution had no power. However, professors like Howard Brooks, who serves as the faculty chair, said the vote was sent as a message to McCoy.

“The faculty pulled this card out in terms of the vote of no confidence to make sure the board understood how upset the faculty were,” Brooks said.

McCoy faced another difficult moment when the university laid off 56 full-time and part-time positions in late-February. Cast as part of a stated effort to restructure DePauw’s financial standing, the layoffs accompanied $700,000 in healthcare cuts and $193 million in liabilities, according to a piece written by Peter Nicieja of The DePauw.

“Although restructuring is the right and necessary decision, it was not an easy one,” McCoy said in a letter addressed to faculty and staff. “We realized, however, that by acting now we are able to provide substantial separation packages that are well-above the industry norm for our valued staff, allow them a lengthy time to transition and provide extensive resources to assist them.”

Recently, the university projected that the incoming class of 2023 would consist of 445 students — meaning that it would be 20 percent smaller than the class of 2022, according to an article written by Katie Hunger of The DePauw. Further, enrollment has been on a downward trend. In the fall of 2009, 2,396 students were enrolled at DePauw. The total enrollment has dropped more than 10 percent since, with 2,156 enrolled this past fall.

For his part, McCoy stated at the time that the continuing construction on campus and the most recent fundraising campaign would, “show that this restructuring was not done in fear or panic but in preparation for a thriving DePauw.” McCoy maintained that the university was operating on a sustainable and responsible course, attributing low enrollment to different visible factors, such as the layoffs, costs, the no-confidence vote and a “crackdown on drinking” in Greek life.

That course will soon be someone else’s to tread, though Vrabek expressed her appreciation at McCoy’s desire to remain and guide the university through the coming year.

“Dr. McCoy’s willingness to remain as president during the coming year will ensure a smooth transition and equip the university to thoughtfully approach the coming search in collaboration with faculty, staff, students and alumni as we plan for the next chapter in the future of the university we love,” Vrabek said.