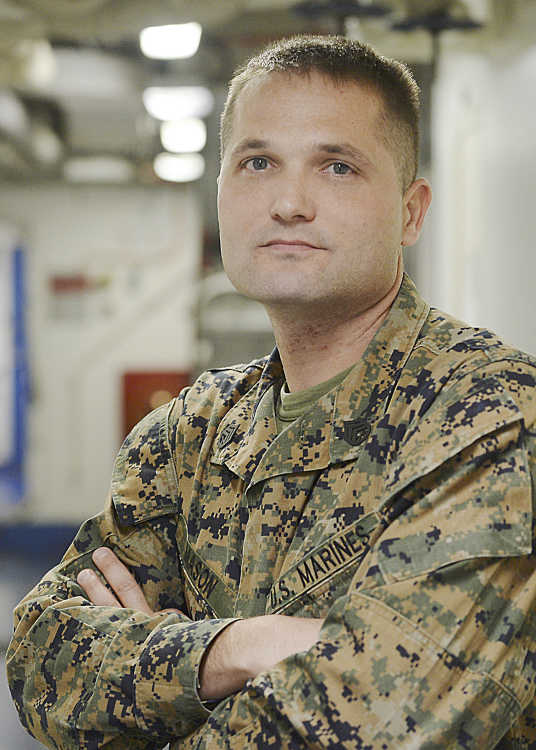 “I’m looking forward to training with international partners and learning more about other cultures,” Mason said.

BALTOPS 2019, set to continue through June 21, includes sea, air and land assets. The multi-national exercise provides a unique training opportunity that fosters cooperative relationships critical to ensuring safety at sea and security on the world’s interconnected oceans. According to U.S. Navy officials, it is designed to improve training value for participants, enhance flexibility and interoperability and demonstrate resolve among allied and partner forces in defending the Baltic Sea region.

Mason is a fire support Marine attached to 2nd Marine Expeditionary Brigade out of Marine Corps Base Camp Lejeune, N.C.

Mason credits success in the Marines to many of the lessons learned growing up in Bainbridge.

“I learned to work hard at home and be welcoming to others, which has served me well,” Mason said.

BALTOPS 2019 was planned and is being led by U.S. 2nd Fleet (C2F), as directed by U.S. Naval Forces Europe. C2F was re-established last summer as a response to the changing security environment, and BALTOPS 2019 marks the first time the renewed fleet will be operating in Europe.

“As you all are aware, U.S. 2nd Fleet will be leading the exercise, but make no mistake, it will be founded on NATO and partner principles,” said Lewis. “Through BALTOPS 2019 and exercises like it, we strengthen our relationships and improve overall coordination and interoperability between allies and partners during both peace and times of conflict.”

The exercise will begin in Kiel, Germany, with the pre-sail conference. At-sea training will occur throughout the Baltic Sea, including events scheduled near Putlos, Germany; Saaremaa Island, Estonia; Riga, Latvia; Klaipeda, Lithuania; and Ravlunda, Sweden.

At the end of the exercise, most participating ships will sail to Kiel to participate in the Kielerwochen Festival (Kiel Week).

Serving alongside the Navy means Mason is part of a world that is taking on new importance in America’s focus on rebuilding military readiness, strengthening alliances and reforming business practices in support of the National Defense Strategy.

“Our priorities center on people, capabilities and processes, and will be achieved by our focus on speed, value, results and partnerships,” said Secretary of the Navy Richard V. Spencer. “Readiness, lethality and modernization are the requirements driving these priorities.”

As a member of one of the U.S. Marines’ most relied upon assets, Mason and other Marines know they are part of a legacy that will last beyond their lifetimes contributing to the Navy the nation needs.

“Serving in the Marines means pride and belonging to a tribe that is closer than brothers or sisters,” said Mason.