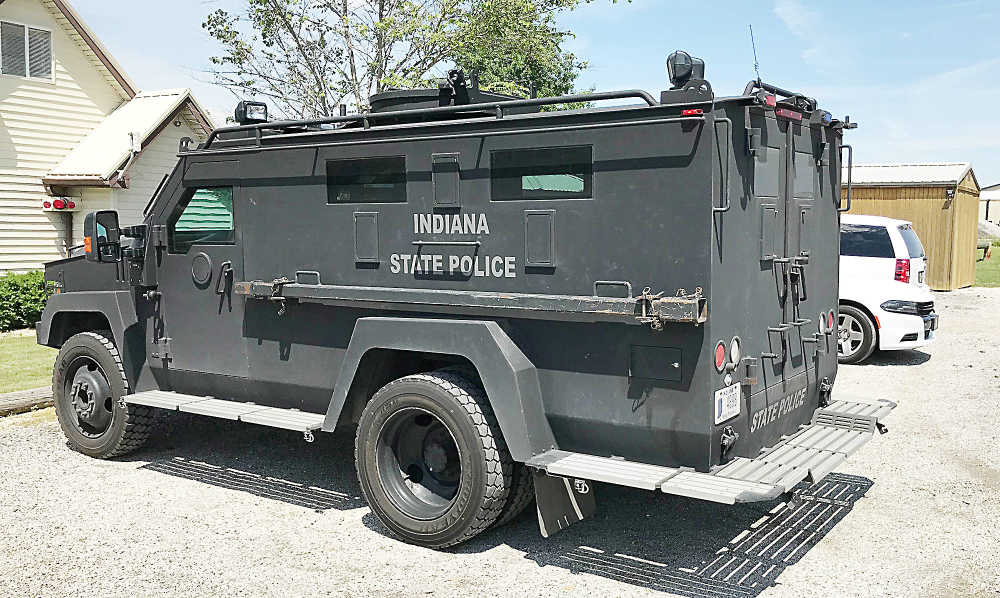 If anyone noticed a lot of Indiana State Troopers in town Tuesday, there was a reason.

The ISP SWAT team conducted tryouts for a new position for their central team at the Putnam County Sheriff’s range.

The ISP SWAT team was originally developed in 1975 with only seven team members. The original team members still carry a connection to Putnam County. The negotiator was retired ISP Det. Sgt. Bill Smith, who is the father of ISP Major Todd Smith, previouslythe detective in charge at the Putnamville post and now chief counsel for the ISP and Det. Brian Smith of the Bloomington post.

The ISP SWAT team is made up of 38 members who serve on the north, central and south teams throughout the state of Indiana. Several former and current team members have strong military backgrounds from all armed services, with special operational skills which only enhance their independent abilities.

These teams can be operational anywhere in the state within an hour and often can assess the situation in much less time with members saturating a scene from all over the state.

In 2008 the ISP SWAT teams went to a full-time service due to the numerous volumes of calls for service which includes high-risk warrant services, hostage rescue, barricaded subjects, assisting the FBI hostage rescue team, U.S. Marshals Fugitive Task Force and working with the several other SWAT teams throughout the state of Indiana.

The ISP SWAT team trains 450 hours a year and responds to more than 300 calls a year collectively. Each member volunteers for this assignment, and must participate with all of the required training, as well as pass a grueling physical each year to maintain their position on the team.

When called upon, these members leave their families, sometimes for days at a time, sacrifice holidays, family events and other events to serve the citizens of the state 24 hours a day.

The ISP SWAT team is led by Lt. Mark Tow, who is a 1986 ISP classmate of Sheriff Scott, Stockton who has Tow on speed dial.

“In January of 2015, one of the first things I did was to partner with the ISP to be of service when needed for emergency responses of this nature,” Stockton said. “Fortunately, I have only requested their assistance once in four-and-a-half years.

“Like several other smaller law enforcement agencies throughout the state, we have a limited number of personnel at the sheriff’s office and resources available,” he added. “With the astronomical costs, training requirements, liability, equipment needs and sustainability, it only made sense to me to utilize the ISP.”

Stockton added that his department has stayed busy with calls of other kinds.

“From Jan. 1, 2019 to date the Sheriff’s Office has responded to 5,535 calls of service,” Stockton said, “therefore relinquishing events of this nature to professionals, we can focus on the other voluminous needs of the community.

“In concert with this philosophy of outsourcing very specialized, high-liability services to the ISP,” Stockton said, “I have previously implemented and rely on the Indiana Conservation Officers under the leadership of Lt. Kent Hutchins to take the lead on all water related rescue operations in the county, as they are certified divers and have all of the necessary equipment, level of training and proficiency to get the job done when called upon.”