By Joe fields: For the Banner Graphic 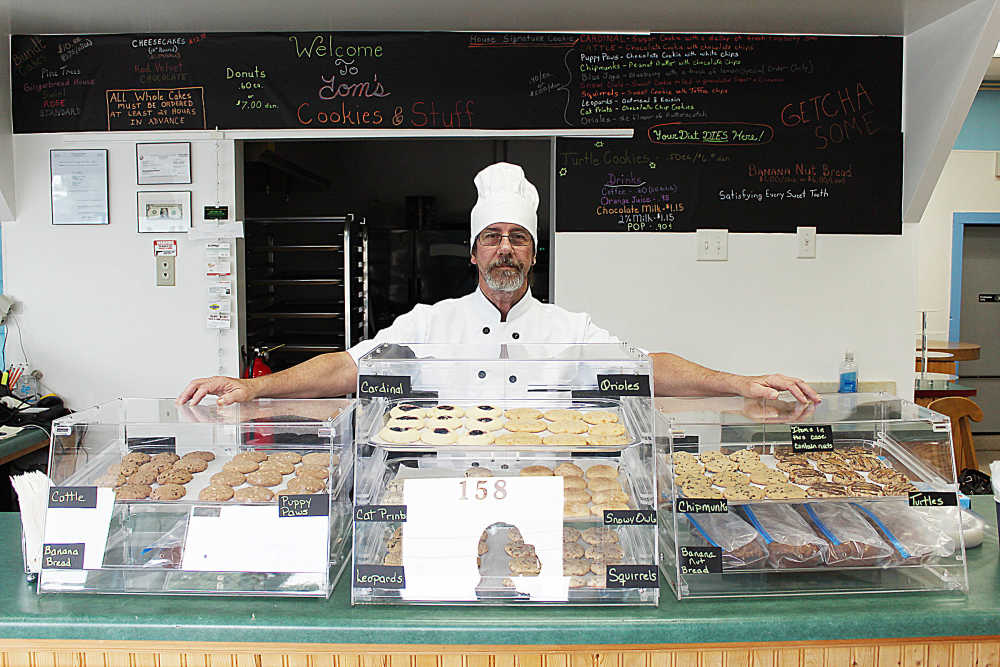 Three combinations you wouldn’t expect to mix well, but in actuality, this mix has created a masterpiece.

In Fillmore, a new bakery is making waves. Tom Arthur is the baker and owner of Tom’s Cookies & Stuff, making cookies and other baked goods from to turtles to Bundt cakes to banana bread to even cheesecakes.

A sign on the Tom’s Cookies & Stuff menu lets customers know that this is not the place to stick to their diet plans.
Banner Graphic/Joe Fields
Order this photo

Having only been open for a month, business is taking off. Yet how this all started is perhaps the best part of the story.

A few years ago, Arthur was working in a factory and noticed that everyone was bringing in their meals for their breaks and he thought up the idea of bringing in cookies.

Except Arthur didn’t buy them, he made them.

“The guy sitting next to me asked where I bought them and I told him, ‘I didn’t buy them, I made them,’” Arthur said. “So he asked if he could try one and the next thing I know he goes and gets his girlfriend and she wanted to try one. Before I knew it, it was plant-wide, three different shifts that wanted to try them.”

He was laid off from that factory and went to work for another and soon enough three different factories and employees wanted to try his cookies. Yet before opened his bakery, before he worked at a local factory, Arthur was a truck driver.

“I drove trucks for 23 years and my wife asked if I wanted to be off of the road and work in the factory she worked in when they had an opening,” he said.

Even before driving trucks and working in factories, Tom had experience working in restaurants when he was a teenager. He was a breakfast cook and those skills stayed with him all the way up to the point where he started baking cookies in his kitchen.

“I started with baking cookies and banana bread and then I started making cheesecakes, which have become popular.” Arthur said. “When I make something new, I always ask ‘Will it become popular?’ and I ask my family, friends and coworkers to try something new.”

Between the months of November and December, Arthur made 138 dozen orders of cookies and after that, he knew that they had to go bigger by opening their own bakery. This led Arthur and his wife to buy a vacant building on the corner of Main Street and Westwood Road and turn it into Tom’s Cookies & Stuff.

Arthur takes orders for his baked goods mainly in Putnam County with some orders coming from Brazil. But of all the places to pick when it came to opening a brick and mortar bakery, Fillmore was chosen.

“This was a good starting point to test it to see if it would work or not. This building was up for sale so I called the phone number and asked what they wanted for it,” Arthur said. “Turns out this is where I wanted to be.”

How this worked was that Arthur’s wife would take the orders and Arthur would make the cookies. Having 10 different types of drop-cookies, Tom’s cookies became a fan favorite.

When school was in session at Fillmore Elementary, parents would come over and order some baked goods and have a cup of coffee and would even show up early in the afternoon and order then. Arthur even started staying open a little later than usual so parents can bring their kids over for a cookie or two.

Above all, Arthur is not formally trained at this. There is always trial and error on his baked goods and the menu explains it all. The menu inside fills new customers in with a little snippet about Tom:

I am not a professional baker. I’m not a graduate from any culinary arts schools. I’m just your average ‘Joe’ that started experimenting in his kitchen. I introduced my creations to the public, and in no time, became famous with my workplaces. Some people would actually wait in line, at my work station, waiting for me and my cookies to arrive. That’s when I decided to take the advice of my family and coworkers, to open a cookie shop. These recipes are my creations, not copied from a recipe book, internet, stolen. So please enjoy.