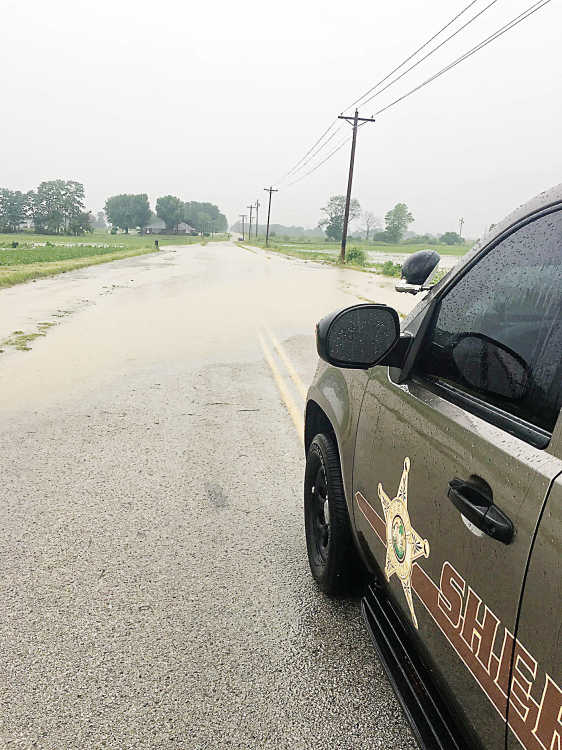 Besides the problems an extraordinarily rainy spring caused for farmers, it also did no favors for the condition of roads in Putnam County.

A record-setting rainfall on Saturday made the local road situation even worse.

A day of heavy rains left streams swollen to beyond their banks and even over roads in certain parts of Putnam County.

Many of the floodwaters remained as of Monday evening, with more heavy rain forecast for Tuesday and beyond.

According to the National Weather Service 3.85 inches of rain fell at the Indianapolis International Airport on Saturday, followed by more than a quarter inch on Sunday.

In Monroe Township, the roads both east and west of Brick Chapel were flooded.

East of Brick Chapel, Dry Branch Creek didn’t exactly live up to its name, flooding along the route of CSX Railroad and forcing the closure of both County Road 325 North and County Road 450 North.

Both roads remained closed as of Monday evening.

To the west of Brick Chapel, the flooding was shorter-lived but still intense, as water was across County Road 350 North in the area of 225 West on Saturday evening.

As is usually the case, the worst-hit area of the county for flooding was in the southeast corner, where Mill Creek was flooded beyond its banks.

All of these roads remained closed as of Monday evening.

During a Putnam County Commissioners meeting already full of road complaints, County Highway Supervisor Mike Ricketts reported that the weather already has road crews two weeks behind the point at which he had hoped they would be at this time, with the likelihood of more rain only set to make things worse.

During the meeting, Ricketts and the commissioners had fielded complaints about the conditions of roads in Floyd, Cloverdale and Greencastle townships, some of these problems exacerbated by the excessive rainfail of 2019.

While some of the floodwaters have subsided, little reprieve appears to be in sight, with heavy rains forecast for overnight Monday into Tuesday.

Beyond this, as of Monday evening, the Greencastle forecast called for a 70 percent chance of precipitation on Wednesday, 80 percent on Wednesday night and 30 percent on Thursday.

Even Friday, with a mostly sunny forecast, carried a 20 percent chance of showers and thunderstorms.

Should the flash floods remain or return, motorists are reminded not to attempt to drive across any flooded roadways, regardless of whether a current is visible.

On Sunday, two adults and three juveniles were fortunate to be rescued in Parke County after their side-by-side off-road vehicle was swept into Little Raccoon Creek and lodged on a large rock.

Indiana Conservation Officers used an airboat to reach the victims and safely return them to shore. No injuries were reported during the incident.