Four INDOT workers escaped with only minor injuries when a pickup struck the truck in which they were working was hit by another pickup late Tuesday afternoon.

The other drive and his passenger were airlifted to and Indianapolis hospital.

At 2:53 p.m., the four workers were in an INDOT truck in the emergency lane at the 48.5 mile-marker with its emergency lights activated. The INDOT workers were performing road maintenance in the area. 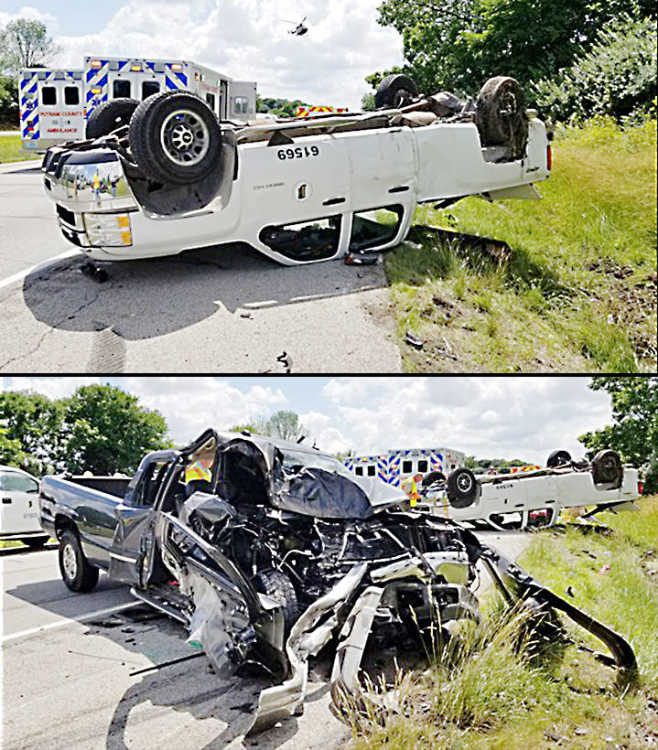 Despite the seriousness of the crash, four INDOT workers were not severely injured in a Tuesday-afternoon crash on Interstate 70. The statuses of the other driver and his passenger are not known.
Courtesy Indiana State Police

The driver of the INDOT truck, John Sadler, 39, of Reelsville, said that through his rearview mirror, he observed a pickup truck travel off the driving lane of the Interstate and onto the emergency lane.

The driver of this vehicle, Aaron L. Cass, 40, of Bowling Green, was westbound on when for an unknown reason he drifted out of the driving lane and into the emergency lane.

Master Trooper Dujan Presley-McFadden determined that Cass was traveling at a high rate of speed.

Sadler said he was able to observe Cass’s pickup truck continue its path, traveling westbound in the emergency lane, eventually striking the INDOT truck in the rear. The impact of this collision caused the INDOT truck to roll over on its roof.

Cass and a passenger in his vehicle received injuries from the accident and were transported to Methodist Hospital by an air ambulance.

The Indiana State Police did not report on their condition, nor did it supply the names of the passengers of either vehicle.

Cass was unable to be interviewed by Master Trooper Pressley-McFadden due to medical services being rendered.

He received a citation for unsafe lane movement.

The Indiana State Police wish to remind drivers of the “Move Over Law” which requires drivers to move to an adjacent lane away from the emergency workers when possible.

If the lane is occupied, then reduce speed to 10 mph below the posted speed limit and proceed through the area with caution, so that a safe working environment can be provided for the emergency personnel working.