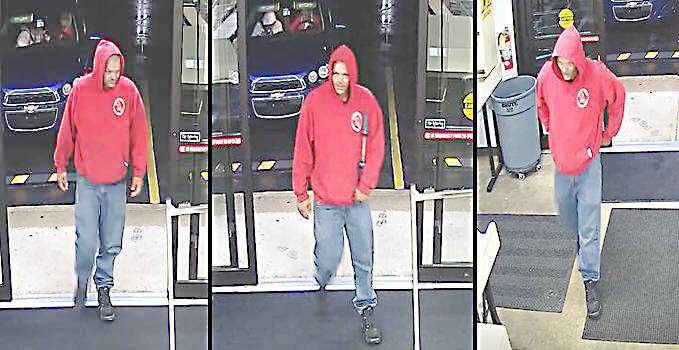 Shown here during a recent incident in a Danville laundromat, an unknown white male is also wanted for stealing from the coin machine at Small Town Laundry in Bainbridge in late April.
Courtesy photo

DANVILLE — A man who stole more than $2,500 from a Danville laundromat is believed to be the same man who did the same to a Bainbridge laundromat in late April.

The suspect arrived as a passenger in a newer model, blue Chevrolet passenger car. He was wearing a red hooded sweatshirt with what appears to be “Triple T Farms” written on the back with a horse logo in a center circle.

He is described as a white male, slim build, in his early to mid-thirties, approximately six feet tall, 185 pounds, with a shaved head and stubble facial hair. He appeared to be with a male and female in the suspect vehicle.

The man and vehicle match the description of the suspect from a similar theft from Small Town Laundry in Bainbridge.

In that April 29 incident, the suspect reportedly entered the laundromat at 6:54 a.m., “punched” the lock and made off with an estimated $1,200.

From the video, Bainbridge Town Marshal Ronnie Campbell identified the blue four-door as possible a Chevrolet Aveo or Spark. Like in the recent Danville incident, there was a male driver and female passenger in the car.

Following the Bainbridge incident, Campbell also spoke to a man seen in the video talking to the suspects as the theft was in progress.

The witness was also seen on the video picking up some of the leftover change from the floor and buying a drink from the soda machine.

The man said he did not know the suspects and had not seen them before. He did attempt to return some of the change to Campbell.

The Danville Police Department is asking for any information regarding the suspect. Anyone who knows him is asked to contact its 24-hour 100-percent anonymous crime-tip line at 317-745-3001, or by contacting Crime Stoppers of Central Indiana.

The Bainbridge Police Department may also be contacted at 522-6211 or through Putnam County Dispatch at 653-5115.