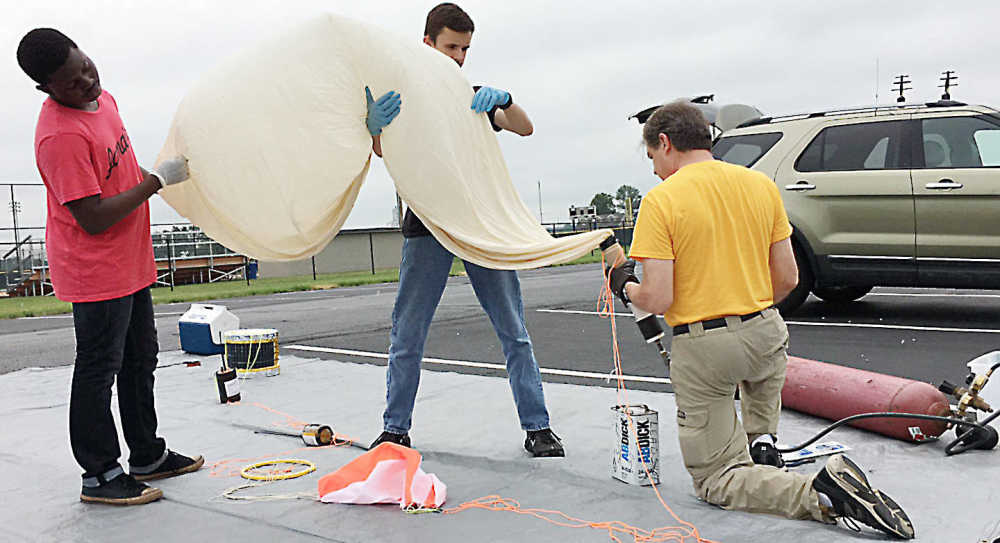 Preparing for the BASE 96 flight in the summer of 2017, DePauw physics and astronomy professor Howard Brooks (right) and students Kobby Van Dyck (left) and Zach Wilkerson inflate a weather balloon with helium. The upcoming BASE 108 will launch on Saturday, July 20 and commemorate the 50th anniversary of the Apollo 11 Moon landing.
Courtesy photo

The Balloon Assisted Stratospheric Experiments (BASE) program of the Physics and Astronomy Department at DePauw University has announced its plan to conduct a high-altitude balloon flight to the edge of space on Saturday, July 20.

The flight will celebrate the 50th anniversary of man landing on the Moon. Release of the balloon will happen at 8:52 a.m. to commemorate the time when Buzz Aldrin and Neil Armstrong entered Eagle, the lunar lander, to begin preparations for descent to the surface.

The launch will occur from the DePauw campus, with the location confirmed the week before the flight. The public is invited to attend the launch and follow the flight on the internet.

This will be the 108th flight in the BASE program.

BASE invites the public to share small items to make the flight up to near space. The balloon payload will rise above more than 99 percent of the Earth’s atmosphere (approximately 100,000 feet) before the balloon bursts and the payload returns to the Earth. The flight will have space for 50 items.

There are restrictions on the items to be flown:

1. Although BASE has always located the landing location for every previous flight, there have been four flights where only part of the payload was recovered. Individuals need to understand that it is possible that the items will not be recovered or damaged during the flight. BASE is not responsible for repair or replacement of any item.

3. No living organism can be flown.

4. No explosives can be flown.

5. No electronic communication devices can be flown.

All items will be collected on Wednesday, July 10 during the public open house at McKim Observatory between 9:30 and 10:30 pm. The observatory will be open for the public to view the Moon on that night, weather permitting.

Questions may be sent to Howard Brooks at hlbrooks@depauw.edu.