By Joe fields: For the Banner Graphic

Working at Crown by day and woodworking by night, Ray Bartlett finds his talent in turning wood into works of art.

Bartlett is turning heads and turning wood with his custom-made pens and other creations.

A South Putnam graduate, Bartlett works on the assembly line at Crown Equipment and comes home to his garage and creates works of art from blocks of wood. How he got into woodworking as a hobby was completely different than what most people would think. 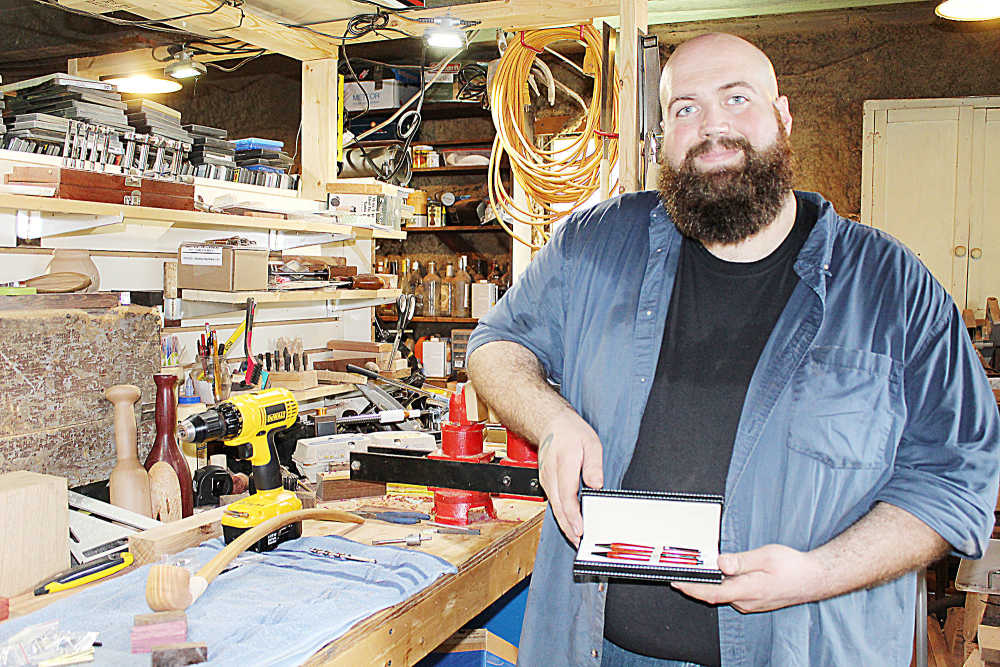 “I got into woodworking more or less by chance,” Bartlett said. “My father worked at Allison Transmission and he did all the housework whereas I got into the art of it.”

Given time, that art turned into something much more. He soon discovered, as he was told by other craftsmen, that woodworking is fast and addicting.

“I just started chasing it,” Bartlett said. “I got a wild hair to do one project and then another and eventually, it grew into this space (the garage) that I’m outgrowing.”

Bartlett uses wood sold from area stores and wood sellers in Indiana ranging from sapwood and hard maple to purpleheart, redheart and ironwood. Using the wood and various techniques that are not used by woodworkers (rubbing the shavings from the wood to smooth out the finish and using rudimentary tools), Bartlett creates accessories and utensils used every day.

“The primary focus right now is making pens and rings,” he said, admitting that he didn’t want to go into ink pens. “Other guys who turn wood do it themselves, but I was getting good at turning wood and getting good very quickly. I decided to try it and I did it well.”

After his first pen was made, Bartlett’s curiosity began to grow, leading to the purchase of blades and other necessary tools that led to the next challenge.

“The challenging project I did was the world map that is on the wall at Greencastle Christian Church,” Bartlett said. “It was several months of planning and working with lead pastor John Tischer, and working on the project was fun.”

Using an overhead projector from the 1980s at 10 p.m., Bartlett set out to outline the world map in Sharpie marker, turning a cedar panel into cedar siding.

“I didn’t want to drop a large amount of money on a small project and I knew there was a way of getting around the problem and that’s what led the project into being fun for me,” Bartlett said.

When asked about going and selling his handmade pens and rings at the local farmers market, Bartlett said he had been toying with the idea of building up stock to do more custom orders, but felt that at the moment the farmers market was not the right place nor at the right time to invest his time and money.

“I was warned before I made my first pen that it would be it would be addictive because it would be quick and easy,” Bartlett said, “but also if you are good at it, then you would hardly get away from it and that’s what happened for a while.”

Though primarily making pens and rings at the moment, Bartlett makes anything and everything under the sun. He even tried to turn a segment bowl where he would put two pieces of wood together but soon found that he had made a mistake. Yet that mistake turned into a custom chessboard.

The whole idea of constant trial and error leads to other projects that he had no idea were there.

“That’s one of the things that I appreciate about this craft,” He said. “A mistake can lead to another project that you didn’t see coming.”

If you are looking for a custom pen or ring of your own, contact Ray Bartlett through Facebook messaging as well as follow him on Instagram to see more of his custom pens and rings and other projects.