‘Send Me No Flowers’ opens at PCPH 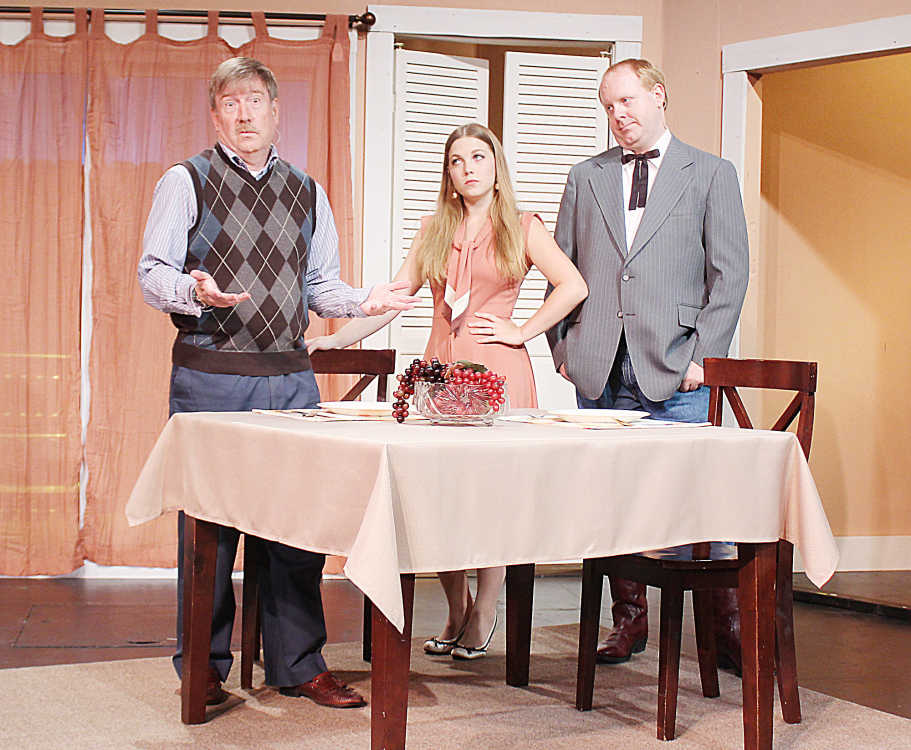 Operating under the incorrect assumption that he’s about to die, hypochondriac George Kimball (Scott Armitage, left) tries in vain to set up wife Judy (Samantha Flannelly) with old college friend Bert Power (Bryan Schroeder) in the Putnam County Playhouse production of “Send Me No Flowers.” The play opens Thursday, July 11, with seven performances set over the next two weeks.
Banner Graphic/Jared Jernagan
Order this photo

The 2019 season of shows at Putnam County Playhouse continues with a July production of the comedy “Send Me No Flowers.” It will be presented July 11-13 and July 17-20.

All performances begin at 8 p.m. at the Hazel Day Longden Theatre in Greencastle. Tickets are $10 each and can be reserved by calling the box office from 5-7 p.m. Monday through Saturday at 653-5880.

The production is sponsored by Shuee’s Great Buys Plus.

“Send Me No Flowers” is directed by TJ Tincher. Board liaison is Sandi Rossok. The comedy by Norman Barasch and Carroll Moore was last produced at PCPH in 1973.

Scott Armitage has the leading role of George Kimball, a hypochondriac who spends most of his time thinking he is sick. His long-suffering wife Judy is played by Samantha Flannelly.

When George overhears Dr. Morrissey (Cameron Wunderlich) discussing another case, he immediately concludes that he himself has only a few weeks left to live. His next door neighbor, Arnold Nash (Sam Draper), is pressed into service to help him keep his “condition” a secret.

George’s plans include setting up Judy with a new husband, old college acquaintance, Bert Power (Bryan Schroeder), and keeping her out of the arms of a local young cad Vito (Noah D. Pettit).

George also tries to set up his final arrangements with the help of a friendly burial plot salesman, Mr. Akins (Jack Randall Earles). There are fantasy sequences in which the participants try to imagine their future circumstances. Those playing roles in the dream moments are Eleanor Howard, Michaela Semak and Dimitri Flott.

Set design is by Linda Gjesvold with costumes by Sarah Armitage Bond. Working on the stage crew is Grant Pettit. Lighting and sound design is by Schroeder with Darvëll Barger running the sound board and Christopher Douglas running the light board.