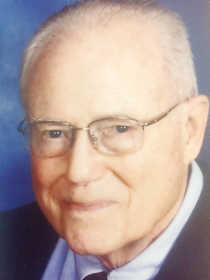 Paul Hayden Clodfelter, 93, passed away Thursday, July 4, 2019 in Round Rock, Texas, at the home of his daughter.

Formerly of Zephyrhills, Fla., he was born on Aug. 24, 1925 in Greencastle to Carl and Grace (Wood) Clodfelter.

Preceding him in death were his daughter Denise Halloran, his parents and three brothers, Myron, Gordon, and Larry.

Paul was a graduate of Wabash College and Purdue University.

During his 12 years in the U.S. Navy, he served in World War II and the Korean War.

He was employed by IBM for 39 years.

Paul is survived by his wife of 62 years, Paula (Woolever); daughter Karen (Mark) Blandford of Round Rock; son-in-law Jack Halloran of Mt. Prospect, Ill.; and five grandchildren, Kelly (Jon) Ott of Chicago, Kevin (Jazlynn) Halloran of Hoffman Estates, Ill., Ken (Kelly) Halloran of Kaukauna, Wis., Lauren (Sean) Casias of Leander, Texas and Kristen Blandford of Round Rock. He was a proud great-grandfather to Connor Ott and Shelby and Sadie Halloran.

In lieu of flowers, memorial donations may be made to U.S. Navy Memorial Foundation, Washington, D.C.