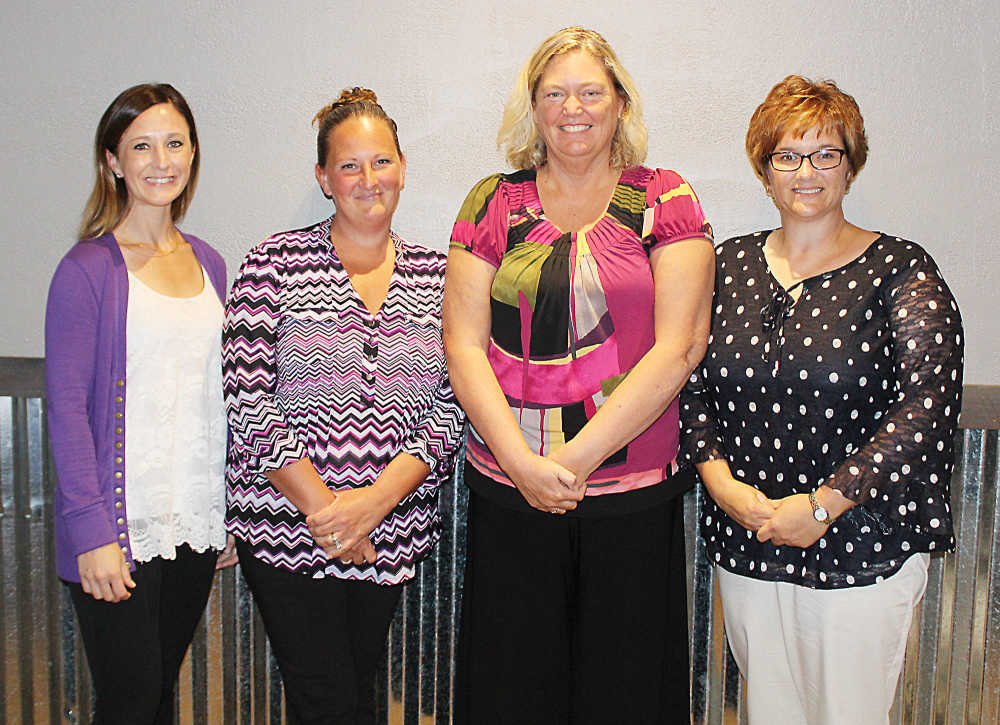 In the first time Ivy Tech has offered the course outside of the immediate Indianapolis area, Alison Proctor and Brandi Sherrill of Crown Equipment, Ami Pennington of Ascena and Susan Blair all pursued and obtained the Strategic Human Resource Management (SHRM) certification during the spring semester.

Ivy Tech Workforce Alignment Program Manager Kelly Brooks said she asked SHRM instructor Rhonda Foster if she would be willing to drive to Greencastle to teach the course and she agreed.

SHRM certification is nationally-recognized with conferences all over the U.S. and is highly desirable in the human resource world. Those who receive this certification are considered industry leaders.

Earning the certification carried with it a difficult exam at the end of a heavy workload of classes and homework.

“The test is brutal,” Pennington said. “Even though I knew it would be tough, that got me stirred up. Once I got settled, it was OK.”

All four passed successfully so on Tuesday, the Development Center held a celebration for the successful participants at the Putnam Inn, considering that three are employed at major local employers and the fourth wanted to better her skills in hopes of landing an HR job in the future.

Proctor talked about how the shared experience, including stress, of the class brought her closer to the other three women.

“When you have four people together in class, you get to know each other well,” Proctor said. “Rhonda pushed me to participate more than I would have otherwise.”

Sherrill agreed that Foster also coaxed her out of her comfort zone.

“It was very emotional, stressful,” Sherrill said. “My family was upset with me because if I had free time, I was studying.”

Even after all the hard work, it was a bit tough for any of them to fully believe they had passed.

“After the test was over and it says ‘pass’ my mind still played tricks on me until I got my certificate in the mail,” Blair said.

Clary emphasized that the development center is will to help local employers with training needs such as SHRM.

Development Center Director Kristin Clary said “The Development Center is committed to aiding local employers with needs they express, and works closely with industrial companies to help strengthen their workforce to ensure local economic health for Putnam County,” “By Ivy Tech offering these classes locally, we can help local residents who have full-time jobs by offering opportunities to become better educated through a certification process.

“It strengthens our human resource community, which is the backbone of our local industries due to the need for more employees in Putnam County and Greencastle.”

Brooks noted that the 100-percent passing mark was unprecedented in the Indianapolis area.

“We really appreciate everyone doing this. It’s a lot of stress,” Brooks said. “It’s our most successful class from Indianapolis. Thank you for making it so successful.”

Clary hopes SHRM classes can be offered at Ivy Tech again this fall. If any current HR Managers and staff are interested in becoming SHRM certified, contact the local Ivy Tech office to discuss enrolling in the fall class.