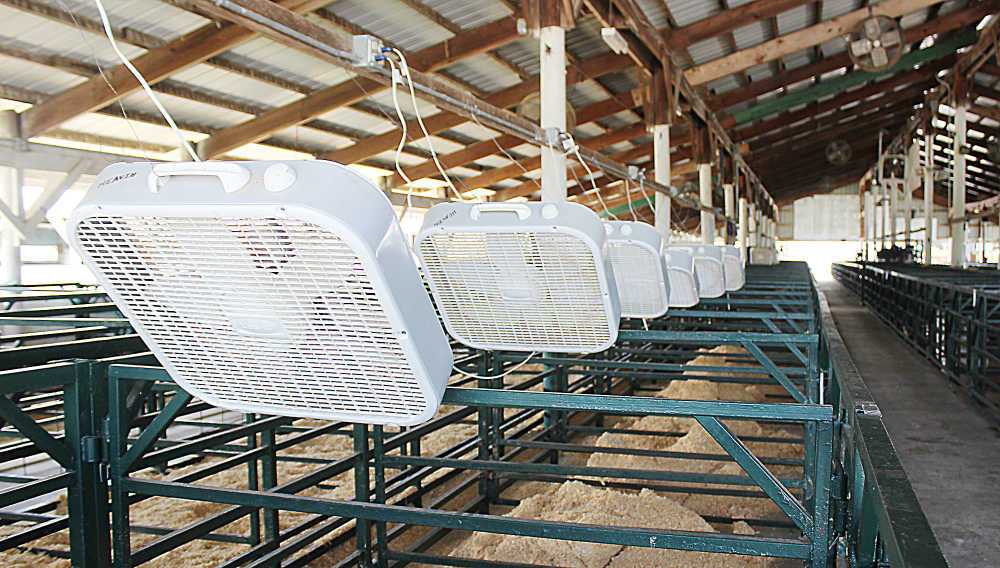 No animals have arrived at the Putnam County Fairgrounds, but a row of fans already await the pigs set to arrive in the swine barn on Saturday morning. More cooling devices promise to show up as animals begin arriving in extreme heat.
Banner Graphic/Jared Jernagan

The air outside is reaching temperatures in the mid 90s. The heat index could flirt with 110 degrees.

Experts tell us the best course of action during an excessive heat warning is to avoid unnecessary activity and stay inside.

At the 2019 Putnam County 4-H Fair, which officially begins today, the show will go on, heat or no heat.

And there will be heat, with a projected high temperature of 93 degrees on Friday, 93 on Saturday and 90 on Sunday. Add to that heat index values between 105 and 110, and things could get dangerous without taking proper care.

So what precautions are 4-H livestock superintendents taking to keep the animals — and more importantly the 4-H’ers, parents and volunteers — safe in the heat? Taking their time, staying hydrated and generally taking a common sense approach.

With the dairy show set for Sunday, the projected final day of the excessive heat advisory that began Thursday, superintedent Gary Stevens is taking a common-sense approach to the heat.

“Slow down and drink water,” Stevens is telling his 4-H’ers and parents.

“I’ll tress that everybody just take your time, relax,” Stevens said. “There’s no need to get in a big hurry.”

Most importantly, the people and the animals need to have plenty to drink.

Like dairy, the horse and pony club will be showing in the heat on Sunday — though showers and storms are also possible that day.

With four full days of shows from Sunday through Wednesday and an outdoor arena that provides no shade, there’s little choice but to proceed with caution.

“We’ve been asked if it’s too hot if we can move the show, but where can we move it to?” superintendent Ashley Underwood said.

Much like Stevens with dairy, the horse and pony leaders have been emphasizing the need to keep the animals cool and hydrated.

“We are making sure that everybody brings fans to hang on the horses’ stalls,” Underwood said. “We have been talking to the kids since June to keep an eye on your horse if they’re drinking.”

For the 4-H’ers, the plan is pretty similar.

“Keep them under the fans and keep them drinking water,” Underwood said. “We had a really nice grandma donate $200 to buy Gatorade for the kids.”

Fortunately, the last three days of horse and pony shows will be after temperatures are set to cool considerably on Sunday evening.

In fact, only dairy, horse and pony, llama and alpaca and goats have weekend shows when the excessive temperature advisory remains in effect.

Beginning Monday, daytime highs are set to cool to the low 80s with overnight temperatures even dipping to the upper 50s some nights.

While this makes for more temperate show days for swine, poultry, beef, rabbits and sheep, these animals still have to make it to the fair in the heat.

It’s the transition that has swine superintendent Lee Fordice the most concerned.

“The biggest concern for travel is just to have water available,” Fordice said. “Pigs don’t sweat so it’s hard for them to release internal body heat.”

There are a couple of precautions Fordice is urging as the pigs travel, and perhaps wait in line at the fairgrounds, in those metal livestock trailers.

“We’re recommending that people travel with water and with bags of ice. They’ll lay on the bags of ice,” Fordice said. “Once we get them here, we think they’ll be all right, but it’s the travel we’re concerned about.”

Additionally, the unloading period, often a stressful time for the pigs and the people, has been moved earlier in the day to further avoid the heat of the day.

Fordice said he bought a couple of big fans at TSC just to keep air moving during the unloading period.

Even after the animals are unloaded, there will be extra steps taken to keep everyone — man or beast — in the swine barn cool.

“We’ll put a hose on the barn to run on the roof to keep the building cool,” Fordice said. “We’ll have plenty of fans on the animals.”

Fans on the animals is nothing new on any fair week. Dozens were already mounted Thursday afternoon in most barns, awaiting the arrival of the animals they will keep cool.

Of course, as important as the animals are, the number one priority remains the people taking part in the fair.

“We can be concerned for the animals all we want but we have to keep the people safe too,” Fordice said.