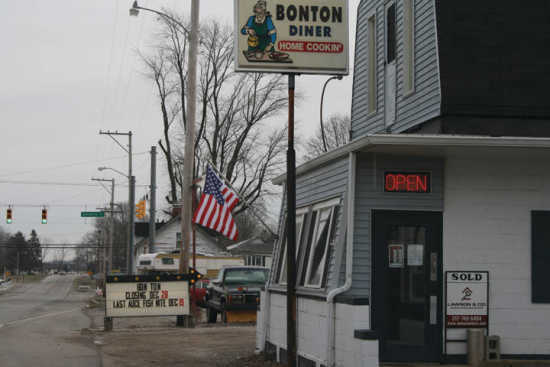 The Bon-Ton Diner in Bainbridge as it looked circa 2008.
Banner Graphic file photo
Order this photo

BAINBRIDGE -- If motorists driving through Bainbridge look at the small building on West Main Street and see that it is not the Machetes Mexican restaurant anymore, that would be because it is now home to a new place to eat.

The Covered Bridge Cafe, owned and operated by Rebecca Alexander and her husband Exar Matute, will still be the only true family restaurant which promises to offer good food in the small northeastern Putnam County town.

However, longtime residents and visitors recognize that it stands on a property with a much-cherished significance. That is because many will still remember eating grub at the Bon-Ton Diner, which was a Bainbridge institution for more than seven decades. 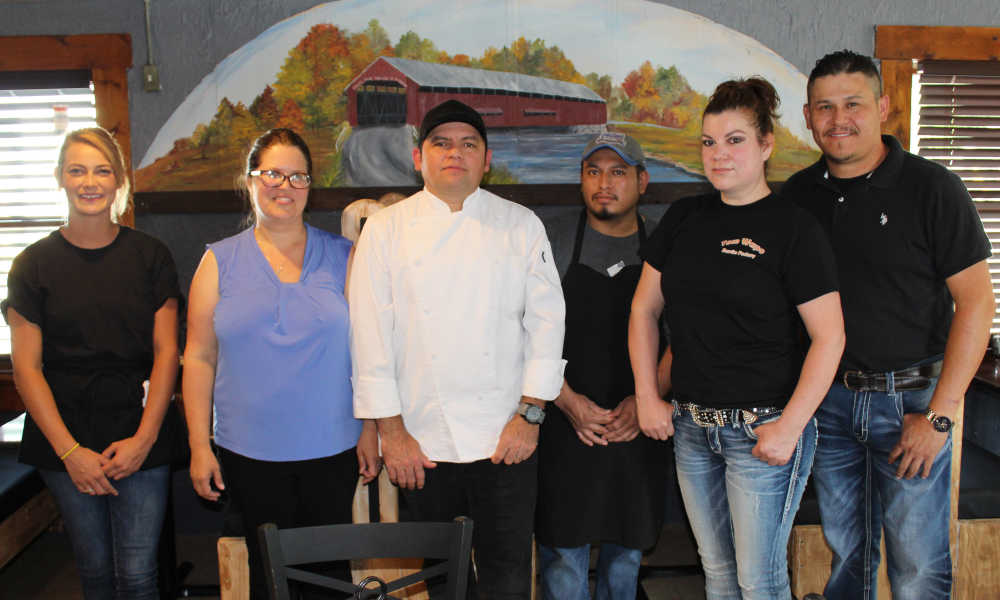 Standing inside the Covered Bridge Cafe in Bainbridge are (from left) waitress Kayla Rhoads, Rebecca Alexander, Exar Matute, chef Fredi Cruz and Araceli and co-owner Sergio Morales. The new restaurant takes its name from the mural of a covered bridge in the background.
Banner Graphic/Brand Selvia
Order this photo

The history of the Bon-Ton Diner, and the site where the new restaurant is located, goes back to the mid-1930s. According to research by Malcolm Romine for his book “Bainbridge Remembered: 1824 - 2018,” it was originally a dining car. It was installed by hand on the side of a newly paved U.S. 36 by Gene Hess, who had come east from Paris, Ill.

Hess and his wife Thelma then bought the restaurant from Ruth Darling in 1936 with just five dollars, a still-decidedly large amount of money during the Great Depression, and ran it as a 24/7 eatery.

The Hesses sold the Bon-Ton to a gentleman named Chuck Kennamon in 1948, but not before it had built a true local following. Joe Hess, the son of Gene and Thelma and also Ruth Darling’s grandson, recounted that his mother both dressed the chickens and baked the pies that were eaten there in the diner. Hess also said before the Interstate would be laid in the 1950s, farmers regularly taking their livestock to Indianapolis would stop by the Bon-Ton on their return home.

Hess remembered being swamped by motorists during a snowstorm that shut down U.S. 36 and effectively stranded traffic for hours. He recalled that they all made their way to the Bon-Ton and ate all the food the Hesses could cook. The silver lining to this frustration, Hess added, was that his father was able to very quickly pay off a contract for a new stove he had installed.

Romine suggests in his book that local “tradition” has it that Clark Gable once stopped into the Bon-Ton for lunch. The diner was otherwise a hangout spot for the high school kids who would stop by during their lunch hour and after school “for a coke or an ice cream cone and a lot of conversation.”

Though they were illegal, the Bon-Ton also had a few slot machines. Romine further writes that verifiable reports account for Hess having a “well-connected good friend” who would warn him when the sheriff was coming to the diner. The slot machines would disappear, and then reappear not too long afterward.

Only a few months after Kennamon took ownership of the Bon-Ton from the Hesses, the original dining car burned down in a fire during Memorial Day weekend in 1948. According to Romine, Bainbridge did not have a volunteer fire department at the time, so a “bucket brigade” was formed to pass buckets of water to save a nearby grocery store owned by a Mr. Fosher. A barber shop located close to the Bon-Ton was also destroyed in the incident.

However, Kennamon quickly reconnected with Gene Hess, who had by then started his own construction company. Hess was contracted by Kennamon to rebuild the Bon-Ton, and he soon completed the building which is now home to the Covered Bridge Cafe.

The Bon-Ton continued to be the local joint in Bainbridge for many more years, before it was eventually leased out and became Machetes. The diner nearly went under in 2008 after it had been put up for auction. Former owners Tina and David Blake undertook the business after a strong outcry came from residents to keep it running.

It is only just recently that Alexander and her husband have renovated the space to provide a fresh, but still familiar, atmosphere for patrons.

“We have worked really hard to update the space — painting, changing the lighting, adding new seating and deep cleaning everything,” Alexander wrote to the Banner Graphic. “We are really proud of the space and love being here. People from town have been amazing and supportive — not just of us, but of the other restaurants that have been here.”

Alexander made it a point that the people themselves should be an important element of the new restaurant. As Bainbridge is a small community, she believes that those who came in and simply knew each other were what made the Bon-Ton so special.

Many regular patrons will fondly remember the big table that sat in the middle of the Bon-Ton. Alexander said they have tried to recreate this by putting tables in the same spot which can be combined into one.

The new restaurant takes its name from a mural painted inside by teacher and artist Barbara Buckelew in 2009. She was invited by the Blakes to create the mural and, according to her granddaughter, chose to paint a covered bridge to represent Indiana. Buckelew passed away in 2011.

The Covered Bridge Cafe’s doors officially, but quietly, opened three weeks ago, and Alexander reported to the Banner Graphic on July 14 that the restaurant had been well-received during its first week of operation.

The restaurant is also co-owned by Sergio Morales, who is also a co-owner of Taco Wapo with his wife Araceli. Matute was once a sous-chef for Bon Appétit, and previously cooked at Bridges Craft Pizza & Wine Bar before opening this new establishment in Bainbridge.

Alexander emphasized that her husband has no stake in Taco Wapo, and that the restaurant is, more or less, Matute and Morales’ “baby.”

The Covered Bridge Cafe has a variety of American-style entrées on its current menu, from sandwiches and burgers to salads and pasta dishes, with fried cheesecake and a brownie ŕ la mode for dessert. Lunch and dinner specials are also currently being served, and the hope is to offer dinner plates soon.

Alexander says a breakfast and brunch menu is planned to be introduced in early August. She provided that breakfast on Fridays will be served from 7:30 to 10:30 a.m., with brunch being served on Saturday and Sunday from 7 a.m. to 2 p.m.

She also put a strong emphasis on the point that every dish will be made from scratch. Alexander also suggested that the restaurant will make a commitment to reach out to area farms to use produce grown here in Putnam County and not too far beyond.

“At some point, probably in the late fall/winter, we will change up the menu as well,” Alexander wrote further. “Our plan is to continue adjusting with the seasons to keep it interesting and fresh while retaining some favorites.”

In an email sent to the Banner Graphic a week ago, Alexander said that Joe Hess, the son of the Bon-Ton’s original owners, is still local, and recently stopped into the restaurant to eat, as well as to tell those same stories.

“We love being in the Bon-Ton space,” Alexander concluded. “The history of this restaurant is so rich and fun. So many of the people we talk to have stories — about when they owned it or worked here or what they used to eat.”

The Covered Bridge Cafe is now open from 11 a.m. to 7:30 p.m. from Tuesday through Sunday.