Passing a school bus illegally? Be sure to smile for the camera 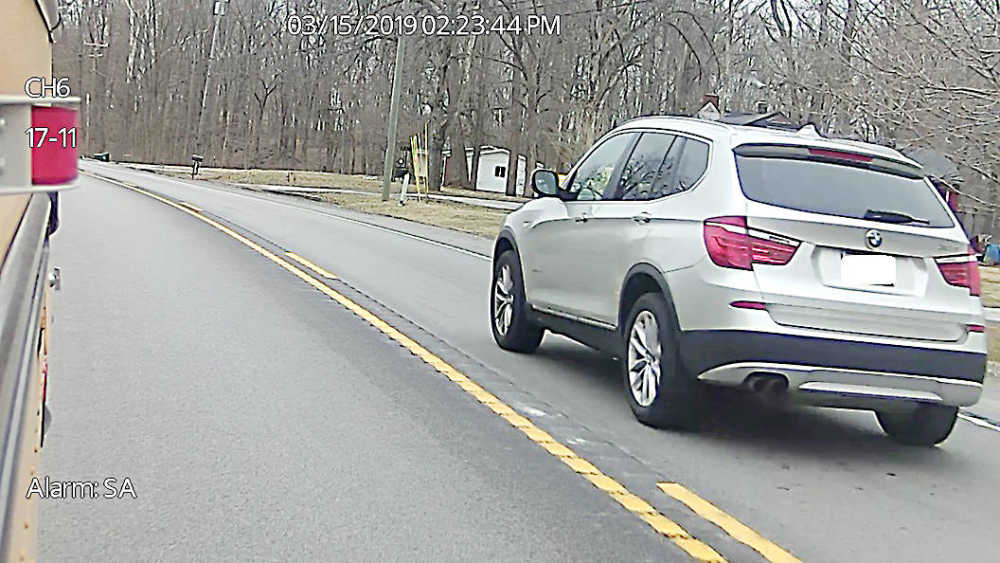 Besides taking video of the entire incident, cameras mounted on bus stop arms can also capture individual shots when a car passes illegally to show what the front, side and back of an offending vehicle looks like, including the license plate. In this case, a BMW SUV blows passed a stopped bus on U.S. 231 during a stop this spring
Courtesy South Putnam Transportation

The law is pretty clear when it comes to passing a school bus stopped to pick up children.

Law enforcement agencies can come up with witty slogans like “If the lights are flashin’, don’t try passin’.” 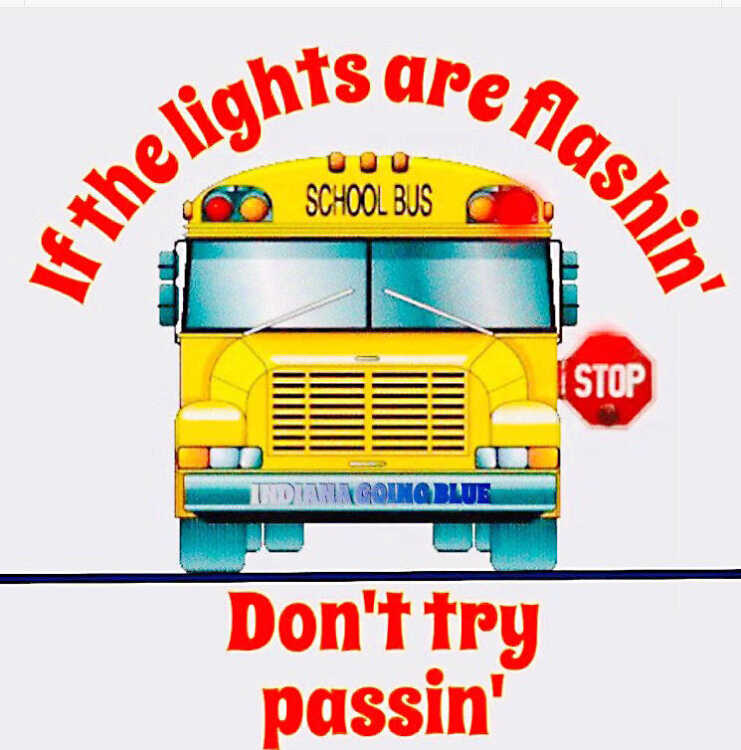 Stories can be all over newspapers and TV stations about children dying when a motorist passed a stopped school bus and hit them.

Yet it seems to do no good with the careless or distracted drivers among us.

With Cloverdale having returned to school on Tuesday and the other three Putnam County districts back today, it’s worthwhile to remind motorists that the penalties for passing a stopped school bus have increased in Indiana. 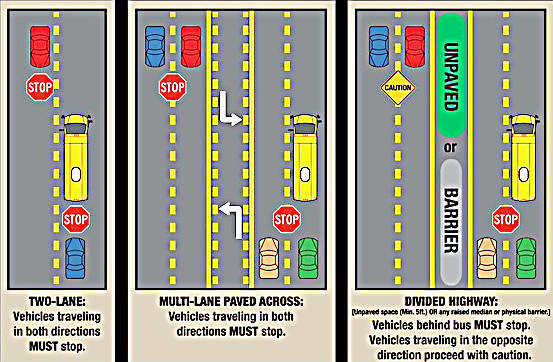 Additionally, with the help of some extra funding from the state, when a driver passes a stopped school bus, there’s a good chance it was caught on camera.

For example, in the South Putnam school bus fleet, not every bus has a camera installed on the stop arm, but those that spend any time on U.S. 40 or other busy roads tend to. And when that stop arm is out, the camera is recording.

Transportation Director Brad Ogborn told the Banner Graphic that each of the cameras has enough memory for a year’s worth of bus stops.

And should a motorist pass the bus while the arm is out and lights are flashing, the driver can simply hit a button to bookmark the incident for review.

At that point, it becomes Ogborn’s job to review the incident and decide if it’s worth sending on to law enforcement. Besides showing footage of the vehicle actually passing the stopped bus, the video also displays the date, time, bus number and the fact that the stop arm is out.

“That’s how I report it when I send it to the county sheriff,” Ogborn said.

He also sends a short video clip to give context, as well as individual screen shots of the vehicle so that the license plate, for example, is clearly displayed.

“I do a section of the video,” Ogborn said. “It gives me more context. And since I’m not law enforcement, I’m not making the decision. If there’s something that would prevent them from prosecuting, they can also see that.

“I’m just trying to make the best decision I can to keep the kids safer.”

Such decisions carry more weight than ever in Indiana. In the aftermath of three children being killed by a motorist in Fulton County last year, the Indiana General Assembly and Gov. Eric Holcomb acted, toughening the laws relating to stop arm violations.

Drivers who illegally pass a stopped school bus can be charged with a Class A misdemeanor, which carries a punishment of up to one year in jail and a fine of up to $5,000.

If, in passing a stopped school bus, a vehicle injures someone, the offense rises to a Level 6 felony, punishable by six months to two-and-a-half years in prison and a fine of up to $10,000.

A driver who kills someone while passing a stopped school bus could be charged with a Level 5 felony, which carries a punishment of one to six years in prison and up to $10,000 in fines.

A court may also suspend a driver’s license for a first offense of passing a stopped school bus and up to one year for repeat offenders.

Along with the increased fines for violating drivers is an increase in responsibilities for the school corporations. Ogborn said he has until Sept. 1 to review all of the corporation’s routes to ensure they are safe.

One new law is that students cannot be asked to cross a state or U.S. highway to board the bus, unless such a stop is specifically approved by the school board.

However, South Putnam’s policy is that this never happens, even on heavily-traveled county roads such as Manhattan Road.

Veteran driver Nancy Knapp said that has been school policy for her entire tenure.

“I’ve been here 16 years and you don’t cross a major road,” Knapp said. “You pick them up door side.”

Good communication is also key in the transportation department, with drivers speaking up when they notice a potential problem that Ogborn may not.

“The drivers have been good about communicating that with me,” Ogborn said. “If they see a place they don’t think it will be safe to cross, we set it up so they come around and pick them up door side.”

All of these safety measures are of little consolation, though, to other drivers who may simply not understand the law.

What’s the rule if a school bus stops for some other reason, such as the stops they must all make at railroad crossing? What’s the rule for divided highways?

While some of it can be confusing, a few simple rules make it easier.

First of all, as a bus driver is preparing to stop to pick up or drop off a student, he or she should activate the flashing yellow lights on the bus.

While it is still technically legal to stop at this point, it can be a cause of confusion, so Knapp tries to be considerate of other drivers, especially if she’s being passed on U.S. 40.

“I’m not a driver who’s just going to throw my stop arm out,” Knapp said. “If they’re passing me, I’m going to slow down and not put the arm out yet.”

“Nobody can stop at a moving stop sign,” Ogborn said.

As the bus comes to as top, the flashing red lights will activate and the stop arm will extend. At this point, it is illegal to pass from either direction.

Divided highways are a little trickier. If they feature an unpaved median or a barrier, then oncoming traffic does not have to stop.

However, if the median is paved, such as in Putnamville and Mount Meridian, oncoming drivers must stop, just like drivers.

These can be confusing and Knapp sees it almost every day.

“There are a lot of times when there is a grass median that people will stop because they don’t know,” Knapp said. “Then in Putnamville (where the median is paved) they blow right on past.”

She’s even seen times when oncoming drivers have stopped, but drivers would pass in the left lane of her own direction of travel.

Of course, keeping kids safe on the bus isn’t just about other drivers getting in trouble.

“I don’t have time to nail everyone just to prove a point,” Ogborn said.

Instead, there are also safety considerations such as bus evacuation drills, which must take place each fall and spring. Buses must be evacuated within two minutes.

“That’s about the amount of time it takes for a bus to be fully engulfed if it were to catch fire,” Ogborn said.

There is also the consideration of which roads to use. Vigo County Schools recently decided to not let its buses use Interstate 70 due to the high volume of accidents.

Ogborn said South Putnam is fortunate that the interstate question is less prevalent for South Putnam.

“That’s something (the interstate) we avoid we can,” he said. “Fortunately, we don’t have any routs that require us to go on 70. It’s just field trips and sports.

“Plus, school buses are only supposed to go 60 mph, so when the speed limit is 70 and most people drive 80, that’s a big difference.”

The 60 mph limit is serious business, too. Anytime a bus — including the white buses often driven by sponsors and coaches — exceeds the limit, Ogborn gets a message to his phone. The same happens in the case of mechanical problems or hard braking.

With GPS tracking, Ogborn is also aware of the start and end time of routes, number of miles and even if a driver stopped at a particular location, which helps when parents call saying their child wasn’t picked up.

Ultimately, though, the safety of the kids remains the most important part of the job.

“The danger’s out there. You can’t control everything,” Ogborn said. “We’ve been fortunate here in the county. I think that’s because we have a lot of experienced drivers.”