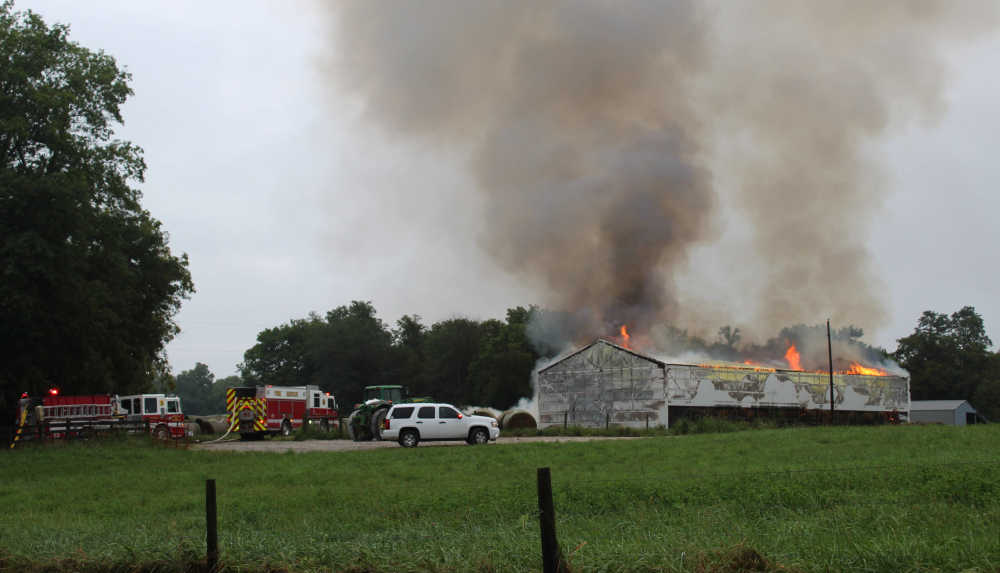 A barn located on Cemetery Road is a total loss after a fire ignited inside Tuesday morning.

At approximately 8:15 a.m., a box alarm went out to emergency personnel for a large barn fire located on Cemetery Road near County Road 300 South.

The Greencastle Fire Department arrived on the scene at 8:22 and efforts to put out the fire were under way when the Banner Graphic arrived to get initial information on the incident at approximately 8:30 a.m.

Tankers from the Bainbridge, Cloverdale, Reelsville, Fillmore, Putnamville and Madison Township fire departments were also dispatched to help put out the fire.

The Greencastle Police Department and Putnam County Sheriff’s Department were called to the scene to direct traffic. Operation Life was also there to provide support.

The Fillmore Community Volunteer Fire Department was released from the scene at 9:14 a.m. to cover GFD’s station in Greencastle.

GFD Chief John Burgess said there were 300 round bales of hay inside the structure at the time of the incident.

Burgess said the barn essentially collapsed from the damage it sustained, but that fire personnel tore down sidewalls to better access the inside.

Burgess reported no human or animal injuries during the blaze.

An investigation into the definite cause of the fire was ongoing as of Tuesday afternoon.

While total damages from the fire have yet to be determined, Burgess estimated the structure loss at $20,000. The value of the hay inside could not be estimated.

The barn was owned by the Butler family and sat on its large farm south of Greencastle.