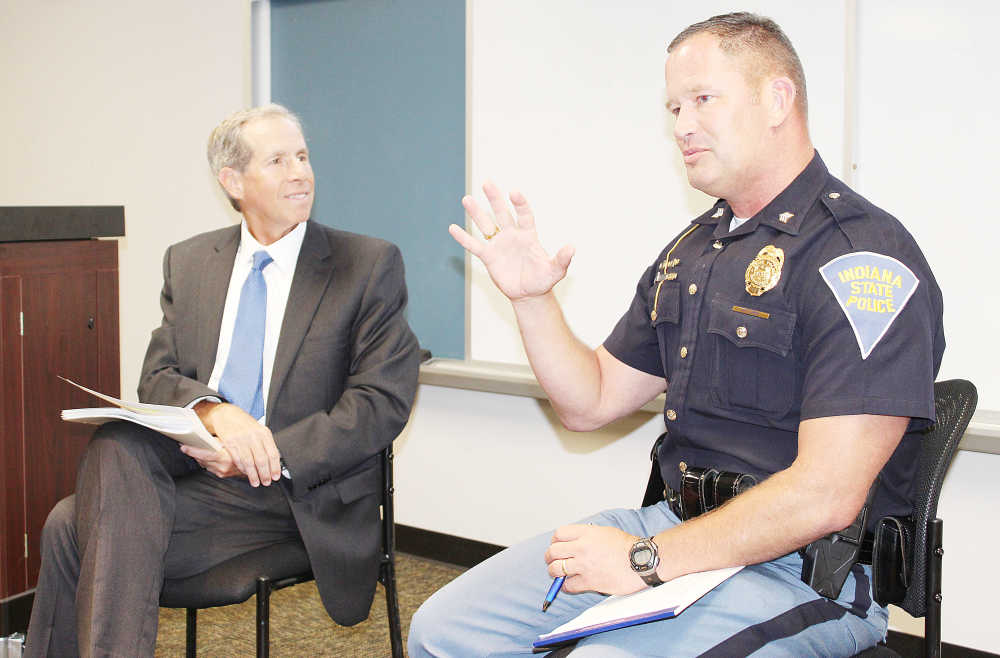 The broad complexities, issues and benefits of social media engendered a healthy conversation during this month’s Community Conversation Monday evening.

Jeff McCall, a professor of communication at DePauw University, and Sgt. Matt Ames of the Indiana State Police provided perspectives on the role of social media in an engaging presentation held in the Kiwanis Room at the Putnam County Public Library.

The Community Conversation Series is sponsored by the Greencastle League of Women Voters (LWV), the library and the Greater Greencastle Chamber of Commerce.

McCall is an established media critic who has written numerous op-eds on social media behavior. He also wrote “Viewer Discretion Advised: Taking Control of Mass Media Influences,” in which he addresses issues with media integrity and bias. He has also appeared on “The O’Reilly Factor” numerous times.

Ames is currently the Putnamville District public information officer for the Indiana State Police, and has served in Lafayette and Terre Haute and with the Commercial Vehicle Enforcement Division.

“A lot of good things happen on social media,” McCall said to begin the presentation, “but there is also a dark side.”

This set the tone for his skeptical view on social media in general, as well as the ethical issues facing different platforms that highlighted the discussion.

For his part, Ames talked about how social media aids in his police work and acquiring information. However, he also had warnings as to social media’s pitfalls from a societal perspective.

“These social media platforms were not built for humanitarian ideas, but were designed to exploit for personal gain,” McCall said, referring to platforms such as Facebook and Twitter as avenues acting on the “craze” of online interaction.

“We’ve surrendered a lot about us to them, and now they know us even better,” he added. “They have become part of the establishment in how information is spread and consumed, though they were once considered outside of that.”

McCall also spoke on how overwrought social media use could contribute to personal and social issues such as depression, anxiety and, almost ironically, a self-imposed isolation from the outside world and other people.

“Social media doesn’t ‘harm’ us, but the abuse it can bring harms us,” McCall said. “Even adults who use social media can end up with dysfunction. I’ve seen in my observations that many end up as some of the most antisocial people.”

In a striking comparison, McCall said the overuse and dependency on social media was like skin cancer. Going out into the sun once will not contribute to it, and neither will continued exposure provided precautions such as using sunscreen are taken. Similarly, social activity can prevent these adverse feelings of loneliness.

“I have found that if someone has a consistent distraction or pull from social media such as work or a faith system, then they may not be as ‘Facebook-depressed,’ as others,” he said.

McCall also referenced the “fallacy of technology,” which provides that just because these platforms are available, this doesn’t mean they should be used. The professor heavily attributed this issue to a perceived modern need to be recognized through social media.

“I find the idea of the selfie to be rhetorical insanity,” McCall opined as an example. “It implies that we’re self-absorbed and don’t care about the world around us. People want to go viral.”

To drive home these points quantitatively, McCall cited a finding from the National Center for Missing & Exploited Children that social media activity in general was the primary driver for sexual predators.

McCall also cited a YouGov poll that found 22 percent of millennial social media users saying they had no friends. Fifty percent admitted they were addicted to their social media platforms, while 57 percent said ads on social media drove them to purchase items they may not have the budget for. Social media was also found to interfere with completing homework.

McCall also invoked Chamath Palihapitiya, Facebook’s former vice president for user growth, from an interview at Stanford University’s School of Business in 2017. In a nutshell, Palihapitiya said these platforms were ripping apart the social fabric through a lack of civil discourse and face-to-face interaction.

In a ray of guidance, McCall finally cited a study conducted by Jean Twenge, a psychology professor at San Diego State University, that found teens who limit their social media use to one hour a day are typically happier than their peers.

In a more positive turn from the drawbacks expounded by McCall, Ames said the platforms he utilizes in his everyday work help law enforcement to conduct investigations or convey important information such as road closures.

He saw the benefit from getting information out to the public and the press through posts on Twitter and especially Facebook, which he believed tended to illicit more productive responses and less of what would be described as “trolling.”

“Social media is certainly a double-edged sword, and it will be here to stay and can have unintended consequences,” Ames said. It was here that the conversation changed to users being able to take control of their experiences and observations online.

“I look at this as like telling your children to look both ways, don’t talk to strangers, that kind of thing,” he said further. Ames provided that unfettered rants and images can damage reputations, in addition to affecting job and enrollment prospects for young adults.

“It is not evil if it is used properly,” Ames said, before the presentation turned into a forum through which issues of free speech and “policing” came up.

LWV President Leslie Hanson and McCall both agreed platforms could benefit from being able to “pause” or delay posts. Hanson added that this could simply mean that a user would have time to really think about a post or video’s implications.

Multiple queries from attendees came up regarding how to regulate or censor content that would be considered dangerous or harmful to others.

McCall took a conservative approach with users’ part in this. Responding to a statement about how fake accounts could simply be reported as spam, he said this could incite a “mob” mentality to suppress content - political or otherwise, true or not.

However, he also said that companies like Twitter and Facebook, as private entities, had the right to deplatform such users, but that this invariably conflicted with First Amendment rights of expression.

“Social media platforms are going to have to do some innovation about how to monitor this,” McCall said. “I’m not opposed to regulating content on this basis, but it has to be done in a methodical way.

“You have to do a ‘sniff test’ to determine whether what you’re reading is misinformation, about what is ‘fake news.’ The societal timeline is compressed, meaning that people want to be vindicated or will jump to conclusions.”

Ames spoke more on the issue of content that could be seen as violent in nature, saying social media can be difficult to assess when it comes to pure intent.

Both Ames and McCall concurred that threatening content, in and of itself, is a form of protected speech that demands the burden of being objective and actionable. However, threats made on social media between individuals could also be handled through civil courts.

Ultimately, McCall said the burden on limiting the scope of such threats, as well as content which pushes misinformation and false narratives, is on the consumer.

“Facts don’t speak for themselves,” McCall said, echoing a sentiment from a colleague. “People do.”