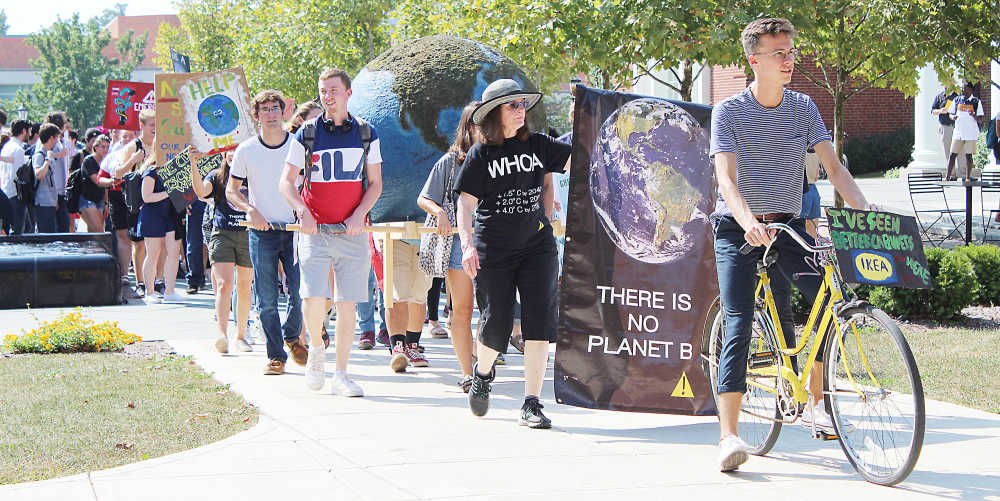 With the globe model at the forefront, the DePauw Climate Strike march, part of a nationwide effort, begins from Stewart Plaza at noon Friday. The marchers made their way to the Putnam County Courthouse.
Banner Graphic/BRAND SELVIA
Order this photo

An afternoon rally by students and faculty at DePauw University, as well as local residents, tried to put a spotlight on the issue of climate change Friday.

Making their way from Stewart Plaza on DePauw’s campus to the Putnam County Courthouse, approximately 300 people turned out for the march. A model of the globe written on with messages was at the front of the line, along with a banner that read “There is no Planet B.”

Even though traffic was momentarily disrupted as the group made its way across the south side of the square, everyone stayed together and kept the enthusiasm up. Perhaps most importantly, it was a peaceful demonstration. 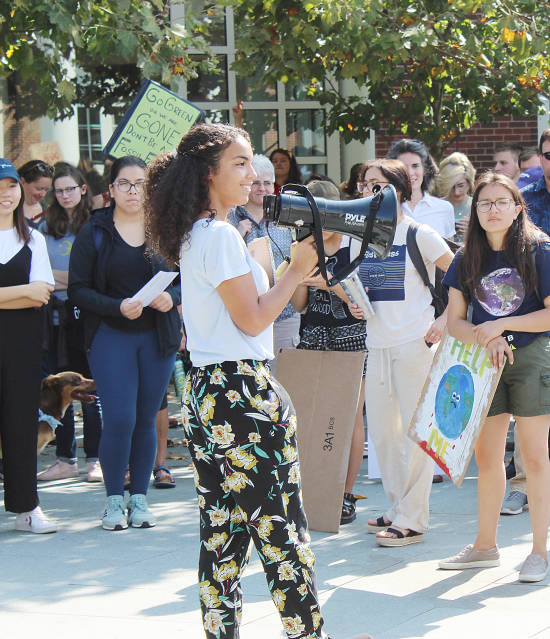 Student organizer Bethany Cintron addresses the group before the march gets under way.
Banner Graphic/BRAND SELVIA
Order this photo

The rally was not a single initiative by DePauw students and teachers alone. It was just one of approximately 1,000 similar events organized across the nation. On an even greater scale, climate demonstrations were held in 150 countries worldwide Friday.

The global movement comes on the heels of a recent congressional hearing in which 16-year-old Greta Thunberg and other activists urged policymakers to “listen to the scientists” and to “take real action” on climate change.

Thunberg, who traveled to the U.S. from the United Kingdom in a zero-emissions sailboat, is in New York to speak at the United Nations’ Climate Action Summit slated for this coming Monday. 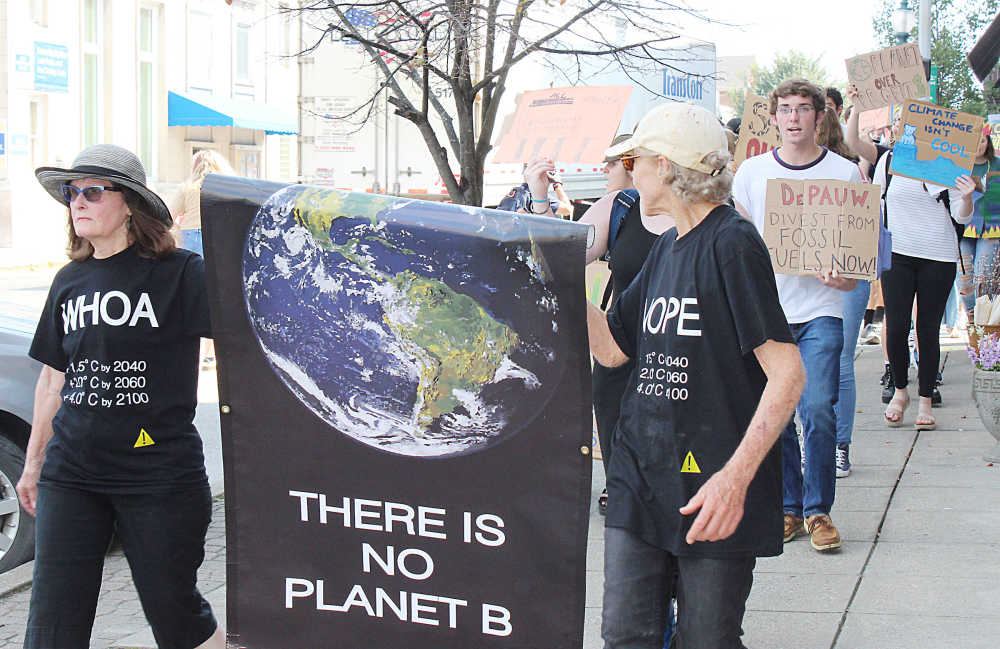 The climate strikes are to be two-part events which are spaced to book-end the U.N. summit. They are also synced with the “Fridays for Future” campaign, which has encouraged student walk-outs to demand political action.

As for the demonstration which germinated at DePauw, the march was predominately student-led. However, there was coordination between student leaders and supportive faculty.

Geosciences professor James Mills, who teamed up with communications professor Kevin Howley to spread the word, emphasized that the march was meant to be uncomplicated in drawing attention to the principal issue. 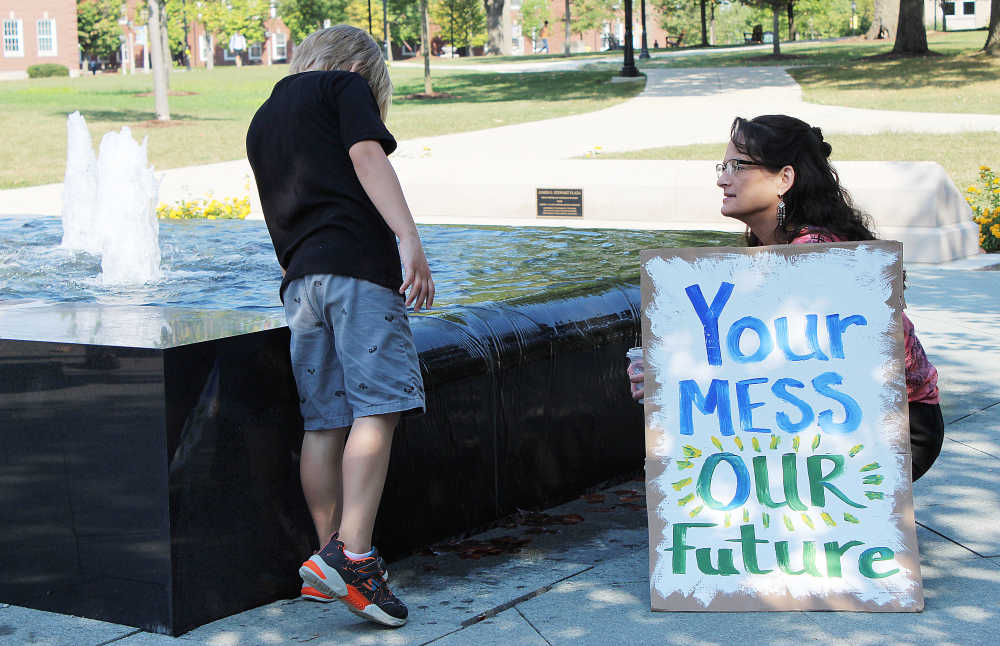 April Billingsley kneels by a fountain at Stewart Plaza with seven-year-old Jaxon Homlet before the march begins.
Banner Graphic/BRAND SELVIA
Order this photo

“This is not just about the students, but we want to support them and what they’re doing,” he said.

Safety was the first priority of the march, and to cause as little disruption to downtown businesses as possible. Mills also made it a point that necessary permits were obtained, even though organizers haven’t been in direct contact with law enforcement.

Speaking on the demonstration interfering with classes and other commitments on campus, Mills believed there was an understanding among the faculty and students as to its purpose and timing.

“We made it a point to say that if you can make it, that’s great,” Mills said. “If not, we understand, and there are other ways to show solidarity.

“We’ve encouraged everyone to learn more about this movement in other ways, though they may not be able to participate in the march,” he said further.

Mills added that the planned rally had not seen any pushback from the university’s administration, and that the community in general had been supportive. However, Mills recognized that negative outlooks on such activism exist.

“I know there’s going to be resistance,” Mills said simply. “But all we want to do here is bring attention to the issue of climate change, because it affects everyone.

“The science clearly supports that rapid climate change is human-induced,” Mills said further. “It’s changing rapidly, and we need to do something now.”

Ultimately, Mills believed that the demonstration would bring attention to climate change in a constructive way, even if the marchers in total only included him and a student.

“As long the march is greater than zero, we’re making an impact,” he said.

Bethany Cintron, a junior at DePauw and one of the main student organizers of the rally, invoked the media in general, saying that the world is “burning,” and that politicians’ inaction inspires this kind of protest.

When asked about how the rally could help translate attention from activism or to real change, Cintron stressed unity and getting the community more involved as being imperative to the movement.

“I hope that more people will recognize that this is a big problem,” she said. “Of course we want action to be taken physically to fight it, but it begins with something like this.”

Cintron felt the act of coming together was the point of the march, and for it to hopefully inspire change throughout the community.

“This allows people to talk about climate change and meet other people, and it’s important that it starts on our campus,” Cintron said. “Starting local is the most important part.

“It’s better to have action than inaction,” she stated before the march got under way.

The second march will be held next Friday. Participants will organize at the Putnam County Courthouse from 11:30 a.m. to noon and then walk to DePauw’s campus with the globe, which will sit in the courthouse atrium until then.