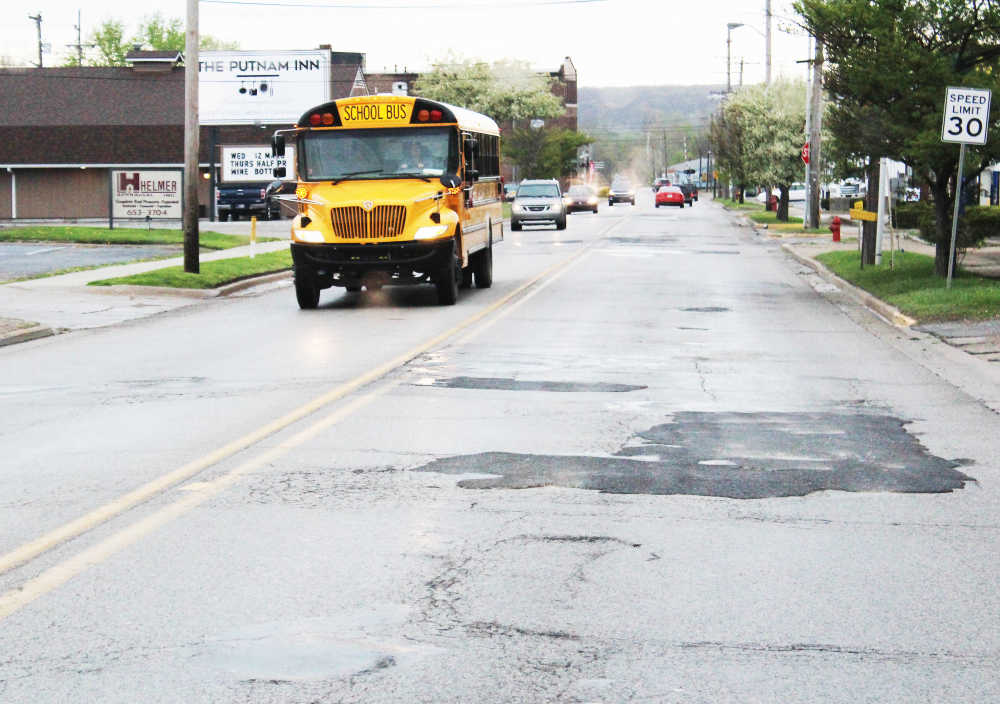 The patchwork of asphalt that has become familiar on U.S. 231 in Greencastle will be undergoing a serious upgrade in either 2021 or 2022, with not only the pavement replaced, but some utility work (and with it some of the underlying problems) to be addressed.
Banner Graphic/ERIC BERNSEE

Editor's Note: The conclusion of this story did not run in the Tuesday print edition of the Banner Graphic. It will be reprinted in its entirety on Wednesday, Oct. 16.

With completion of the lengthy Indianapolis Road project barely in the rear-view mirror, city officials have already turned their thoughts to an INDOT project still two to three years down the road.

That scheduled U.S. 231 “major overhaul” -- a project to be done by the Indiana Department of Transportation (INDOT) – even reared its head during the recent city candidates’ debate despite being not likely to occur until 2021 or 2022.

It came up again Thursday night when Greencastle Mayor Bill Dory shared with the City Council what he knows about the U.S. 231 project to this point.

Knowing the severity of what’s ahead with the planned major overhaul of U.S. 231 through Greencastle, Dory was asked by Council President Adam Cohen, “But it’s not us, right?”

“No,” Dory agreed. “That is a state project but we will be intimately involved in the coordination … and our residents will be too.”

The project will essentially encompass the length of U.S. 231 from the railroad tracks on the north side of the city to Veterans Memorial Highway on the south.

However, the amount of work is expected to vary along the length of the project, the mayor told the Banner Graphic.

“North Jackson Street will see the most work,” he said, “with storm piping and inlets.”

“Bloomington Street may be a milling and overlay project,” he said, meaning the asphalt replacement would be the major concern for that section of the highway.

During the May Council meeting, Mayor Dory had noted that before the major reconstruction of U.S. 231 takes place, the city is expected to tackle some significant infrastructure work of its own.

“I’ve been talking to INDOT about the major reconstruction project,” Dory told the Council back then, “and part of that will involve replacing our Jackson Street waterline and possibly some additional waterline on Washington Street.”

The Jackson Street waterline to be replaced is one in which a liner was installed several years ago. That was an attempt to extend the life of an old line that apparently is one of the early waterlines put in when the city water plant was constructed.

INDOT, Dory explained Thursday, is going to “replace and redo a lot of pavement through town and redo the storm sewers and things like that.”

The project, however, will not involve widening the road, he noted.

“They’re not going to be purchasing property, at least as of what we know to this point,” the mayor said.

He also noted that once construction drawings are finalized, public hearings to detail the project will be scheduled.

“We’re not quite there yet,” Dory said.

City Attorney Laurie Hardwick interjected that INDOT will be required to hold public hearings on the proposed project.

“I want to make it clear this is an INDOT project,” Dory stressed again as if to point residents to where they might vent their anticipated future ire.

“Probably,” the mayor responded. “That also depends on how their bid letting things go relative to the amount of money they have in a given year to do projects.”