Election Board decides on four challenges 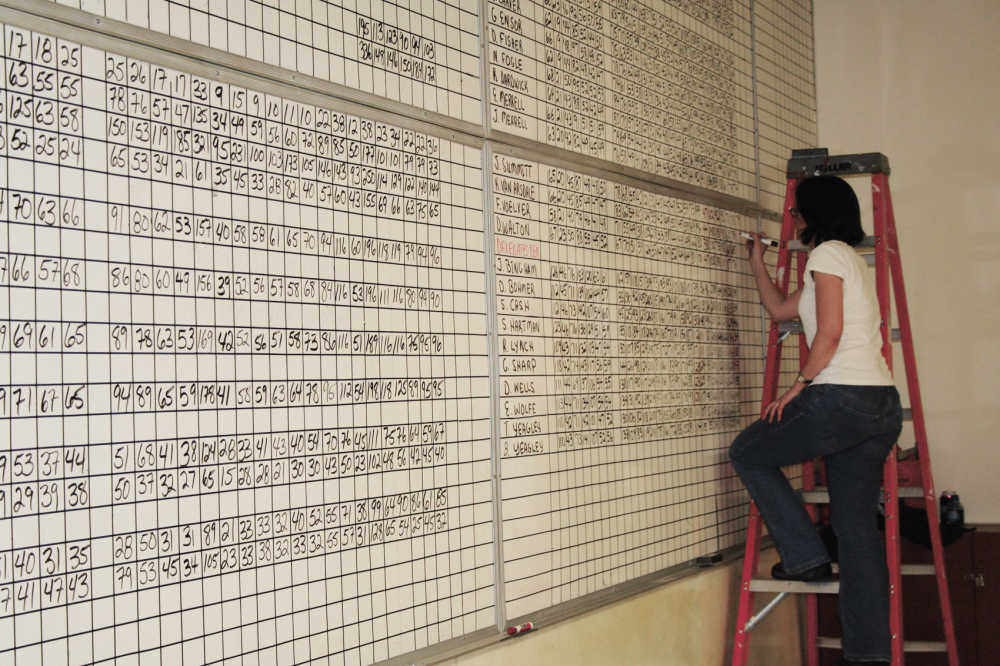 An election night staple at the Putnam County Courthouse for decades, the League of Women Voters will continue to announce and post vote totals this November following a unanimous decision from the Putnam County Election Board Thursday.
Banner Graphic file photo

Over the years, the three-member Putnam County Election Board has been fortunate not to have to adjudicate too many decisions between two sides in political disputes.

Have there been disagreements? Misunderstandings? Even violations of election law?

Certainly, but they’ve always been handled less formally than going before the board for a hearing.

“In the 20 years I’ve been associated with the clerk’s office, we have never had a complaint go to the Election Board,” Putnam County Clerk Heather Gilbert, who chairs the board, said Thursday.

In the past, Gilbert said she or her predecessors Marty Watts and Opal Sutherlin could simply call the offending parties, let them know of the mistake and it would be dropped when they agreed to fix it.

She compared it to when a police officer issues a warning rather than a traffic ticket.

And yet, there Gilbert sat Thursday night, with her two fellow members -- Republican appointee Jack Sutton and Democrat appointee June Wolfe -- at her side, ready to hear four new challenges, bringing the count to seven since August.

“This year, for whatever reason, nobody wants to let that go and we have four challenges before the Election Board,” Gilbert said.

“All I can say is that now our hand’s been pushed and we have to make a decision,” she added. “Do I feel it’s been taken too far? Yes.”

The signs, which were homemade with posterboard and magic markers, did not contain a disclaimer saying who had paid for them. This is a violation of state election law, even for homemade signs.

Huff, Duncan and Gruenholz did not deny the violations, instead saying they did not realize homemade signs applied and had learned their lessons.

It was at this point that Gilbert made her statement about such things having been handled less formally in the past before noting the Election Board’s role in such matters.

Like a police officer, the board only determines if a law has been broken before turning the final determination of charges to the prosecutor’s office.

The three board members pretty easily agreed that a violation had indeed taken place. However, they also all agreed that the Class A misdemeanor charge -- and with it up to a year in jail and/or up to a $5,000 fine -- was out of line in this case.

So, by unanimous decision, the board ruled that the law was violated, but sent the report to Putnam County Prosecutor Tim Bookwalter with a recommendation that he not file charges.

“I believe that this was a ridiculous thing to file on,” Gilbert concluded. “It was a handmade sign, worth no money, and I don’t believe it is even worth the court’s time.”

The second matter before the board was a bit more thorny, as it actually involved a paid advertisement in the paper.

Haywood Ware, GOP candidate for the Third Ward of Greencastle City Council, challenged an ad placed by the Putnam County Democrats in the Banner Graphic last month, advertising a meet the candidates picnic.

The ad also lacked the “paid for by” disclaimer.

Ware said little of this challenge, noting that the ad “kind of speaks for itself.”

Defending the matter for the Democrats was Russell Harvey, in place of county chairwoman Kim Fidler.

Harvey emphasized that the law was broken in error, not as a way to hide anything.

As the discussion of the board members opened, Gilbert noted how she saw this as different than the first case.

“In my opinion, this is a much more serious offense,” Gilbert said. “The political parties know that they are supposed to run the disclaimers.”

After further discussion, the board again voted unanimously that the law had been broken However, this time they sent it to the prosecutor with no recommendation.

“I do sympathize with how it could be left off,” Gilbert said. “I honestly, in my heart of hearts, don’t think he (Prosecutor Bookwalter) is going to go after this. I think he has bigger fish to fry.”

Challenge to League of Women Voters

The third challenge of the night might have been the most contentious, though in the end the complainant asked that it be dropped.

Ware was challenging the longstanding practice of the Greencastle League of Women Voters posting the election results on the white board at the courthouse on election night.

In this matter, June Wolfe’s husband Eric served as her proxy on the board, as she is a member of the LWV. Gilbert noted that Eric was already in place as her proxy and that she had come forward to note her conflict of interest in this matter.

To begin with, Ware’s complaint was read.

He opened with an accusation that LWV President Leslie Hanson had gone to the DePauw police chief on Oct. 7 and “told her that she expected trouble from Haywood Ware” during the LWV-hosted candidates’ forum two days later.

For this reason, Ware chose not to participate in the forum.

The fundamental matter of the complaint, though, was Ware believing that the LWV and Hanson in particular should not have a part in reporting election totals.

“She is bias(ed) and a lobbyist for the Democratic Party,” Ware wrote. “Why this has been allowed all these years, I don’t know. I can’t be the only one to ever complain.

“Leslie Hanson has no business handling ballots or totals at any election,” he added.

Gilbert established that neither the forum, nor Hanson’s friendship with Ware’s opponent Veronica Pejril would be discussed.

Ware tried to open his statement by telling of when he approached Hanson about joining the League of Women Voters.

Both Gilbert and Sutton quashed this as irrelevant.

This upset Ware, who then expressed his displeasure at Eric Wolfe serving as his wife’s proxy.

“I don’t think husband and wife works for me. So I’m just going to drop the charges,” Ware said.

However, the hearing continued, addressing Ware’s assumption that others shared his concern about the League’s involvement on election night.

LWV volunteers used to serve as runners for the clerk’s office, actually taking results from one office to another before they had been officially reported.

Retired Democrat Election Board member Bud Sharp expressed his concern over this practice and it was changed. League volunteers only handle the results after they have been officially recorded and reported to the state.

“They’re not getting any information before it becomes public record,” Gilbert said.

“No one has access to any ballots before we tally them up and release them as official totals,” Sutton added.

“That’s not what I was told,” Ware responded.

After this, Hanson responded to the complaint.

“The League is proud to be non-partisan, neither supporting nor opposing candidates or political parties at any level of government,” Hanson said, “but always working on issues of vital concern to members and the public. As the president of a local League chapter I have a responsibility to be non-partisan and not personally support any candidates or political party.”

She then directly addressed accusations

Regarding going to DePauw Police Chief Charlene Shrewsbury, Hanson said she could not have, as she was in Albuquerque, N.M., that day. She went further and said that no LWV member spoke to Shrewsbury.

Hanson did, however, say that Sheriff Scott Stockton reached out to her regarding attending the forum.

She also said she is not a lobbyist for the Democratic Party.

“I work hard to maintain my non-partisan status as the League president and I am not a lobbyist for the Democratic Party, nor have I ever been,” Hanson said.

Finally, Hanson addressed the matter at hand, saying the same thing that had already been said by Election Board members.

“Our volunteers and indeed the general public are not allowed in the courthouse until after voting has concluded,” Hanson said. “I nor any other League member handles ballots and we do not have any opportunity to alter the official vote total that is given to us by the clerk or her employees. The totals that go on the big board are from the clerk’s print out, which is also the same public document that the Banner Graphic and party officials receive that evening.”

When Hanson was done speaking, Gilbert also noted that 12 letters had been submitted in support of Hanson and the LWV.

At the end of more discussion, Eric Wolfe moved to dismiss the complaint, based in part on Ware’s request it be withdrawn.

Sutton seconded the motion and it passed 3-0.

Ware found himself on the other side of the final challenge, as Fidler had brought a complaint against two of his signs, saying they did not contain the proper disclaimer.

Both signs were situated on Indianapolis Road in Greencastle. One of them in the yard next to First National Bank and the other on the back of Phil Gick’s property that butts up to Indianapolis Road across from Headley Hardware.

Fidler had come to the clerk’s office, providing pictures of both signs, saying they did not contain the proper disclaimer.

One problem, however, was that both photos were taken at night and there was a shadow on at least one that could have been blocking the disclaimer.

Ware provided photos of the signs that he said showed they were not in violation.

In the case of the sign next to First National, Gilbert found the disclaimer was on only one side, which is all that is required by state law, provided it is on the “front.” However, on the advice of the State Election Division, the board did not further consider which side is the front and chose to dismiss this complaint.

The second sign -- which has since been removed anyway -- was harder to determine. When Gilbert got to it, she found a disclaimer on it.

The question then was if the disclaimer had been there before or if Ware, a 70-year-old with a bad knee, had crossed the road while it was under construction and climbed the hill that had been dug out for a new sidewalk in order to replace the original.

With the distinct possibility that the disclaimer had simply been in a shadow, the board voted unanimously to also dismiss this challenge.

In a meeting that lasted nearly 90 minutes, two challenges were upheld, though not with strong endorsements to pursue them further, while the other two were dismissed.

It seemed that in Gilbert’s estimation, as well as others present, it was time that could have been better spent on other matters.

“I feel like we should be a little more kind to each other,” Gilbert said.