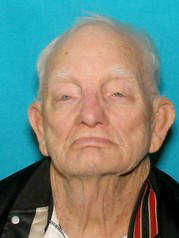 Billy Steele is missing from the Cloverdale area. He was last seen around 8 p.m. Friday, wearing a red flannel shirt and black sweatpants.

CLOVERDALE — An elderly Cloverdale man went missing for around five hours Friday night and Saturday morning before he was located.

He was found in a cornfield by Cloverdale Deputy Marshal James Collings.

Around 1:30 a.m. the Putnam County Sheriff’s Department confirmed that Steele had been found.

Prior to that, the 86-year-old had last been seen around 8 p.m. Friday in the area of Clover Meadows Golf Course. He was wearing a red flannel shirt and black sweatpants and black shoes.

Not only did local police, fire and EMS agencies take part in the search, but a medical helicopter and an Indiana State Police helicopter with night vision assisted.

While the helicopter search was called off around midnight, local responders continued with their efforts on the ground.

A statewide Silver Alert was issued just about an hour before Steele was located by authorities. It was promptly canceled once he was found.

When he was missing, Steele was considered to be in extreme danger, possibly requiring medical assistance.

However, he was reportedly found in good health and was reunited with his family as of 2 a.m.