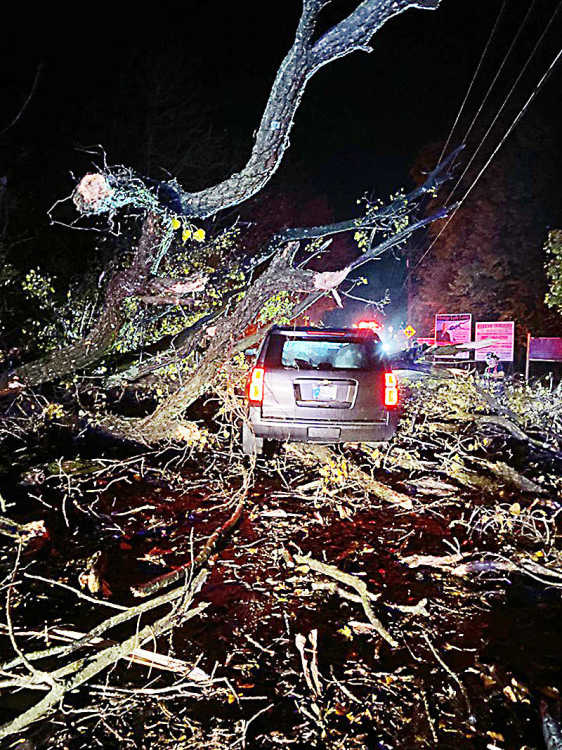 While no one was injured in the accident, Richard Olson of Coatesville and his juvenile passenger certainly must have gotten a scare Saturday evening as a tree fell on their Chevrolet Suburban as it drove on County Road 725 East.
Courtesy photo

It wasn’t so much that it rained that much on Saturday. It’s just that it started and didn’t seem to stop.

While an estimated 1.9 inches of rain over the course of the day, according to the Greencastle Middle School WeatherSTEM unit, is not unheard of, a rain that started Saturday morning in Central Indiana and did not let up until evening, followed by overnight winds, caused 18 weather-related incidents in Putnam County between 2 p.m. Saturday and 6 a.m. Sunday.

It also nearly forced the cancelation of a concert at DePauw University. 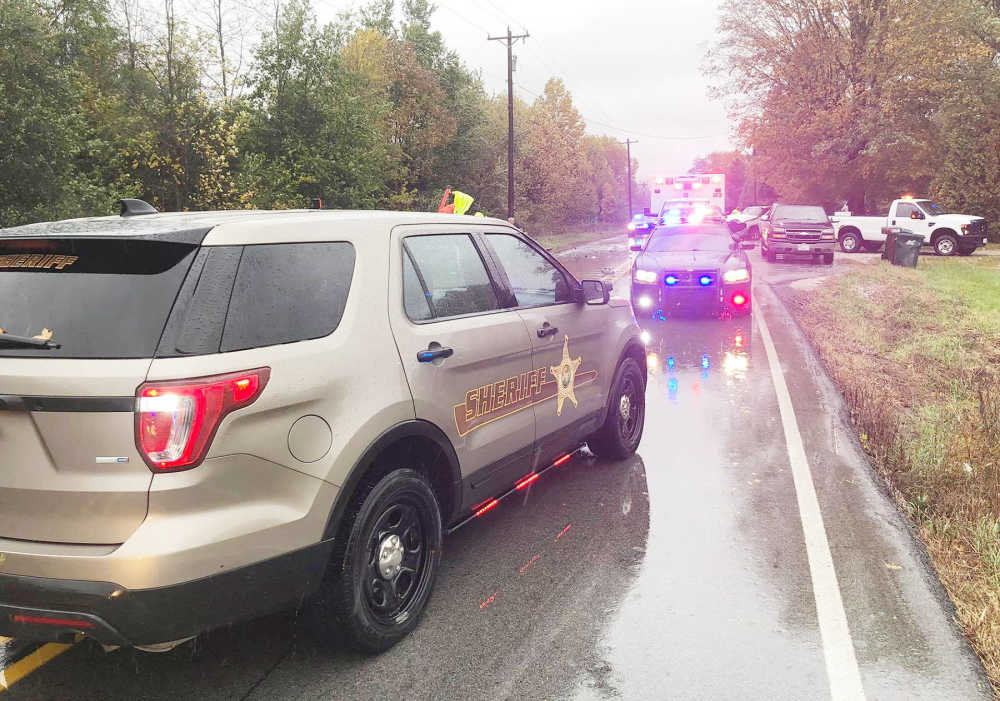 A three-car crash on State Road 240 had the road closed to traffic for 30 minutes Saturday afternoon.
Courtesy photo

Fortunately, local motorists seem to have escaped without major injuries.

In one case, a tree actually fell on a passing vehicle.

At 8:17 p.m., Richard D. Olson, 59, Coatesville, was southbound on County Road 725 East in a 2017 Chevrolet Suburban when the tree fell from the east side of the road and hit the vehicle.

A little power outage can’t stop the show Saturday evening, as Postmodern Jukebox finishes its performance with an acoustic set by the light of hundreds of mobile phones.
Courtesy photo

Paramedics were called to the scene to check on a juvenile female in the vehicle, but she was medically cleared.

Another crash earlier in the day required extrication and the transport of two patients to Methodist Hospital in Indianapolis.

At 2:46 p.m., emergency responders were called to a three-vehicle crash with injuries near the Putnam County Animal Shelter on State Road 240 east of Greencastle

Responders performed what was described as a “minor extrication,” which apparently involved breaking out the windshield to get a patient from one of the vehicles.

State Road 240 was closed for approximately 30 minutes until the damaged vehicle was towed by Seniour’s Towing.

Most of the crashes involved downed trees, limbs and power lines.

In one instance on the city’s south side, a tree limb fell on a power line near the intersection of Berry and Indiana streets.

Greencastle firefighters arrived on the scene just before 9 p.m. to find the power line smoldering. Firefighters contacted Duke Energy as the fire burned itself out, not damaging anything else in the vicinity.

However, the incident knocked out power in the area, including to the Green Center for the Performing Arts at DePauw University.

Internationally-renowned ensemble Postmodern Jukebox was in the midst of a performance when the power went out.

However, in a powerful display of “The Show Must Go On,” many of the 1,500 people in the audience got out their mobile phones as a source of light and the band played on, continuing to entertain and delight the crowd.

“Witnessed a lot of magic tonight,” DePauw President Mark McCoy said via his Twitter account. He continued that Postmodern Jukebox “went acoustic and won our hearts. By the light of cell phone, the show went on.”