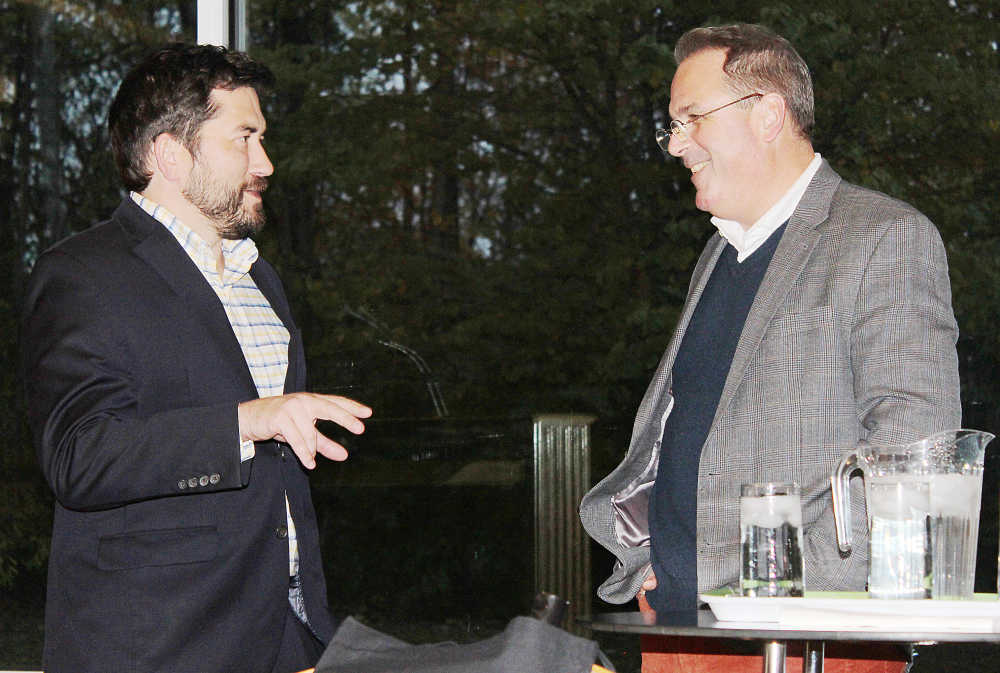 With “fake news” being a potent call word for criticism of mainstream and fringe media, neutrality of journalists and news sources has become an issue with a consistent relevance.

Last Thursday, the Prindle Institute for Ethics welcomed Peter Catapano, Gary Hicks and William Hamrick to discuss this broad topic. However, they centered on the responsibility of journalists in disseminating information, as well as giving equal standing to hate speech.

Catapano is the editor of “The Stone,” a philosophy and ethics blog published by The New York Times. The series is moderated by Simon Critchley, a professor of philosophy who worked with Catapano to start the blog in 2009. 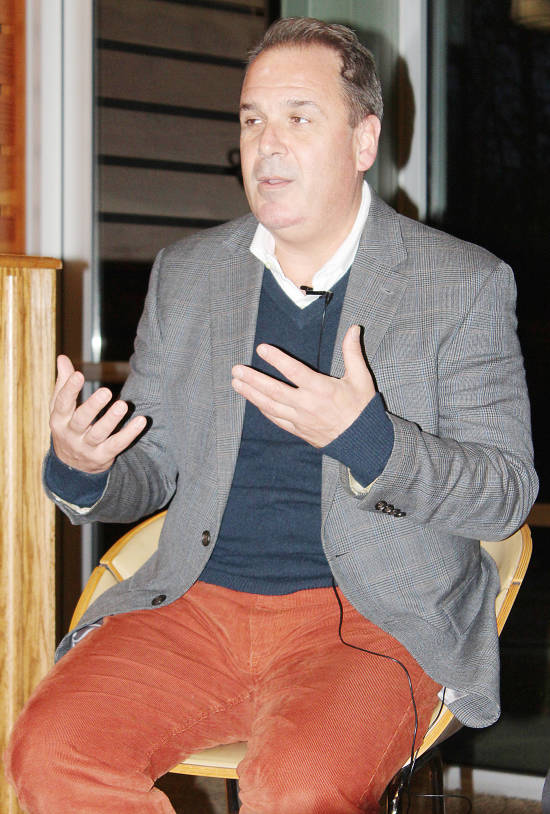 Peter Catapano, editor of “The Stone,” a philosophy and ethics blog for The New York Times, offers a thought during a recent panel at the Prindle Institute for Ethics.
Banner Graphic/Brand Selvia
Order this photo

Hicks is a professor of mass communications at Southern Illinois University in Edwardsville, Ill., and has written on the power of journalists and ethical problems they face, and specifically on media portrayal and stigmatization of mental illness.

Hamrick is a professor emeritus of philosophy at SIU and a 1966 graduate of DePauw University, and has focused on work in the field of ontology, or the study of being and existence.

The discussion was moderated by the Prindle Institute’s director Andy Cullison, who is also an associate professor of philosophy and a 2001 graduate of DePauw. 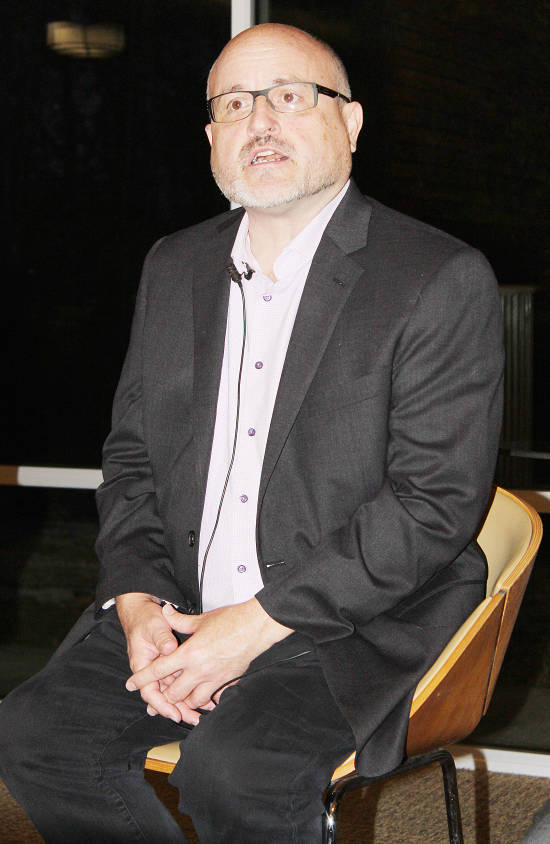 In introducing himself as a longtime staffer with The New York Times to the audience gathered inside the auditorium, Catapano said “The Stone” was created as an opportunity to “leverage” what he described as a then-relatively new mode of sharing content.

“I became a journalist long before I became involved in ethics,” Hicks said next describing his lifelong passion for news. He began his career as a reporter, but became disenchanted by his colleagues’ unwillingness to consider ethical behavior. This inspired him to earn a journalism doctorate with a focus on ethics and become an educator.

The discussion began with the question of what being “neutral” means to news sources when they report news or create content. Catapano first addressed this in terms of journalists being able to separate the news article from the editorial. 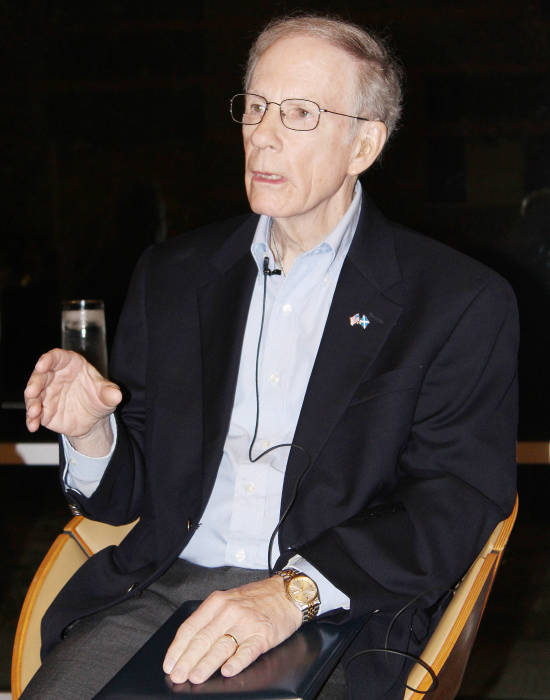 Both were joined on stage by SIU emeritus philosophy professor and 1966 DePauw graduate William Hamrick, who talks about issues concerning hate speech in the latter half of the panel discussion.
Banner Graphic/Brand Selvia
Order this photo

“It’s a term used to designate a specific area of values,” he said in his take on the question. “In journalism, there has been a traditional border between news and opinion, and where there is no embellishment.”

Catapano added that this border “certainly” applies to content shared by news sources, and that opinions given by journalists on the whole should be backed up by research.

“The journalist is responsible to deliver the news to the reader without that opinion,” he said.

Hicks had a unique response which would be a key theme of the night. This is despite him agreeing with the principle tenet of accurate reporting, apart from the partisan narrative making which he believes now dominates the news cycle.

“We need to responsibly report the facts,” Hicks said. “The polarization of the media is a real problem now.”

“However,” he added, “it is a mistake to believe that journalists need to be ‘neutral’ in their reporting, because you can give fringe ideas an audience.”

Hicks essentially emphasized that journalists need to be responsible with these narratives rather than neutral. In another turn, he also suggested that reporters should not fear being honest in providing their takes on events.

Hamrick provided that partisanship and the proliferation of information are linked by philosophical notions of evidence and practicality. These are two spaces which consumers of news content might not consider inherently.

“Few of us have the immediate evidence for the views we have of other people, and even ourselves,” he said.

Hamrick opined that the most concerning of negative or misleading views involves the spreading of hate speech. It was this point which would tie into Hicks’ individual conversation on the balance of different viewpoints.

“There is a difference between what is presented and how it is presented,” he said, referring to a problem he sees with the narratives which can be definitively split between conservative and liberal biases.

“They don’t turn off the (television) set, though,” Hicks responded, “and that’s the problem we have.”

Hicks described journalists and editors as gatekeepers of information, whereby they can say “No” to content which can be determined as being irrelevant or inaccurate.

“There can’t be neutrality in a definite, literal sense,” he said. “There is a judgment system in which journalists choose what to do as gatekeepers.”

As such, Hicks provided there was a reason that longtime and respected CBS anchor Walter Cronkite would always sign off with his signature catchphrase “And that’s the way it is.”

“We live in a world now where we can’t trust the facts,” he said, though Catapano added that journalists should be cognizant of not depending on their clout to influence the narrative.

Hicks believed, as a result of the 24/7 cycle which television news networks keep to, that “gatekeeping has now been reduced to nanoseconds.”

“There really is no time to vet whether it’s true or not.”

Hamrick then ultimately took a legalistic turn on the definition of hate speech and how it is able to have a forum, especially on social media platforms such as Facebook.

“With the internet, every lunatic has a megaphone,” he bluntly stated. “However, it’s still a problem how to define hate speech.”

Hamrick highlighted the harm and offense principles, which hold that speech used to promote violent behavior and cause offense can be limited. He also added that it was beneficial not to restrict hate speech, as those who proliferate it can remain visible.

As the panel began to conclude the evening, a member of the audience asked how news sources can be judged by the content.

To this, Hicks provided a simple, but open-ended, mode for considering whether a source is credible or not.

“Read and watch wisely,” he said. “You can always modify your sources with what you deem to be trustworthy.”