Physician Myers hopes he can fix what ails Indiana 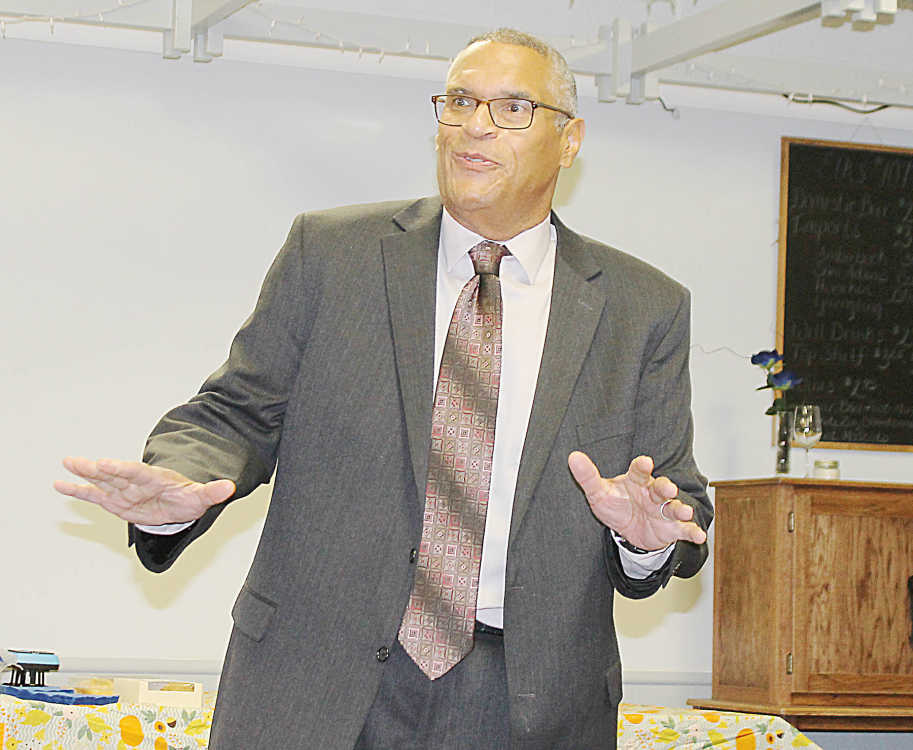 Sharing some of his past experience as a practicing ICU physician, Dr. Woody Myers speaks Tuesday evening about how it relates to his current task of seeking the office of Indiana governor in 2020. Myers was in town to speak to a gathering of the Putnam County Democratic Party at the Greencastle Elks Lodge. So far, Myers is one of three declared Democratic candidates looking to unseat first-term Republican Gov. Eric Holcomb.
Banner Graphic/Jared Jernagan
Order this photo

While he was happy with his life as an ICU doctor in San Francisco, Indiana gubernatorial candidate Dr. Woody Myers can remember the day he decided he wanted to help people more than just one patient as a time.

It was the 1980s and the Indianapolis native was working in the ICU at San Francisco General Hospital.

Myers recalls four specific patients — a 52-year-old smoker with lung cancer, an 85-year-old woman who had fallen in her apartment and wasn’t discovered for a week, a young AIDS patient with pneumonia and an eight-months-pregnant woman who was partially brain dead with a baby still growing in her womb.

With all four patients clearly dying, the young doctor came to a conclusion.

“That was the day I decided that none of those patients should have ever been in my ICU,” Myers told a meeting of the Putnam County Democrats Tuesday evening. “There was something we could have done, should have done either as a society, as a government, as a people that would have kept them from being where they were needing the care we were providing.

His next step was as physician health adviser to the United States Senate Committee on Labor and Human Resources.

He then had a phone call from Indiana with an opportunity to interview for the position of state health commissioner.

As he looked over the packet, he found what he called a “wonderful job,” overseeing many aspects of public health, including overseeing sewer systems, hospitals, doctors, maternal and child health and meat and milk inspections. Myers was excited about all of it.

“When I got that job, I thought, ‘That sounds like something that’s going to help me to make a huge contribution,’” Myers said. “Instead of having one patient at a time or eight on rounds at ICU, I would have 5.5 million patients at the same time.”

This seems to be how Myers sees the office of governor, pointing out that many of the problems he sees facing the state are either directly or indirectly issues of health, obviously including the opioid epidemic, health care and prescription drug prices, but also education and jobs.

Myers, a Democrat, ended up appointed to the office by Republican Gov. Robert Orr. He was later reappointed by Democrat Gov. Evan Bayh.

It was during Myers’ time in the position that the AIDS epidemic really hit home to Hoosiers when teenager Ryan White contracted the disease through a blood transfusion. After the White family was essentially run out of Kokomo when a local health official made the decision not to allow White into school based on fear of losing patients, he was welcomed to Hamilton Heights High School.

Perhaps more importantly to the future of the state, Myers touted a bipartisan effort at the state changed that law.

“It was a Democratic state health commissioner, yours truly, working with a Republican governor, Bob Orr, and a Republican senate and a Democratic house in Indiana, trying to get the right thing done,” Myers said. “We got the laws changed such that the state health commissioner made the final decision and made it on medical criteria, not on other criteria.

“A lot of good things happen when bipartisan cooperation occurs. That was the day I decided, ‘Maybe politics ain’t all bad.’”

That is the sort of forward progress Myers wants to see if he becomes governor.

“I’m running for governor because I have seen these issues,” he said. “I know how to fight against these issues, and they’re all connected.”

He said the state needs “somebody who wants to solve the problem, who believes that it can be solved and who’ll put together a team that’ll make it happen.”

Speaking briefly of his own grandchildren, Myers shared a vision of the future of Indiana in which that generation has moved on from fighting the same old battles.

“That’s why I’m running for governor because I want to fix tough, complicated problems,” he continued. “I want to lead that charge. I want to hire the people that can get it done. I want to change the course of my home state.”

So far, Myers is one of five declared candidates seeking the governor’s seat in 2020. He will be joined on the Democrat side by Eddie Melton and Josh Owens.

Meanwhile, Holcomb will also have company on the Republican side, as Brian Roth has announced plans to challenge the governor from within his own party.