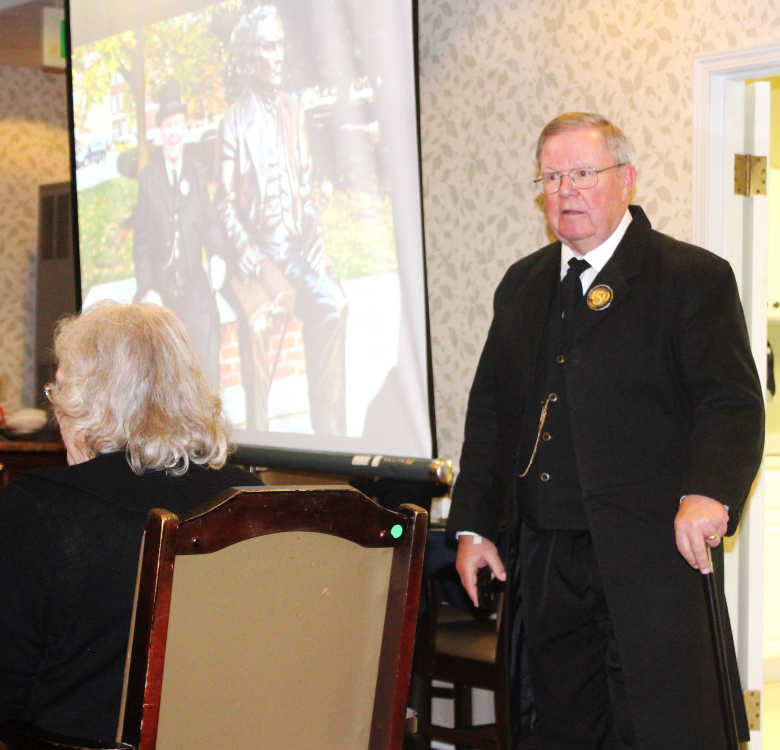 Appearing in character as Purdue University benefactor and founder John Purdue, author John Norberg takes the Purdue Club of Putnam County on a trip through 150 years of history at the university.
Banner Graphic/Eric Bernsee
Order this photo

Imagine West Lafayette without Purdue University. Or Greencastle with both Purdue and DePauw University. Or better yet, Bloomington with Indiana and Purdue.

Could have happened, and that information comes from university benefactor John Purdue himself.

John Purdue made a recent visit to Greencastle with author-columnist-newspaper man John Norberg dressing up as the legendary Purdue to take members of the Purdue Club of Putnam County on a historic tour of the university and its founding.

Norberg, recently retired director of communications for development at Purdue, has authored a new book on the history of the school, “Ever True: 150 Years of Giant Leaps at Purdue University.”

“In my day, everyone knew who I was, even when I was in Greencastle,” said Norberg as he emerged dressed as Purdue, complete with top hat, following the club’s dinner at Autumn Glen.

Purdue, who grew up in Ohio, tried his hand at farming but sold his farm after one year. A shrewd businessman, he saw an opportunity in Lafayette and started a successful dry goods store there.

“I was a good businessman, I made a lot of money,” Purdue/Norberg told the local club.

And he used quite a bit of it to bring the land grant university that bears his name to Tippecanoe County.

In 1862, Congress passed the Morrill Act, establishing land grant colleges emphasizing engineering and agriculture. And by 1869, and the competition was on to find a location for a land grant college in Indiana.

“Greencastle and Putnam County made a bid,” noted Norberg, a 1970 DePauw University graduate. “They wanted to attach a land grant college to Asbury College (now DePauw). Unfortunately there were better bids.”

The three big contenders were Monroe County, where IU had opened in 1820; Indianapolis, which offered the land that later became the Butler University campus; and Tippecanoe County with land in the Battle Ground area.

Purdue made an initial pledge of $100,000 from his personal wealth and later raised that to $150,000 and the donation of 100 acres of land, providing the university be located in Battle Ground and that it be named for him. The Tippecanoe overall bid amounted to $500,000 and earned the selection by the State Legislature.

So Purdue was born May 6, 1869 and the campus opened in 1874 with six instructors and 39 students – only 13 of whom qualified for college acceptance with the rest shuffled off to an academy on campus.

“IU had the best bid,” Purdue/Norberg conceded, “and the land grant college should have gone to Bloomington. But they didn’t pick IU because I outsmarted them.”

The initial group of students was “a rough bunch,” the speaker said.

“Some of the students had been kicked out of Lafayette High School, so their parents sent them to Purdue. It was a rough start.”

Purdue’s tenure at the college bearing his name was short-lived. He died of an apparent stroke on Sept. 12, 1876, on the first day of classes of the third academic year at the university he had helped found. When he died, he still technically owned the 100 acres he had donated to the college, having yet to hand over the deed to the school.

“So the university president and others broke into his apartment to get the deed so they could file it at the courthouse,” Norberg said.

The history of Purdue wasn’t Norberg’s first foray into writing about the university.

With Purdue boasting 25 astronauts as graduates – including the first (Neil Armstrong) and last (Eugene Cernan) men to walk on the moon – Norberg also chronicled Purdue’s involvement in flight in his 2012 book “Wings of Their Dreams: Purdue in Flight.”

Recalling how 13 of the 19 living Purdue astronauts returned to campus a couple weeks ago for a reunion, Norberg noted, “It took 66 years to go from Kitty Hawk to the moon. And it took 14 years from Neil Armstrong graduating to him walking on the moon.”

Norberg also recalled how famed aviatrix Amelia Earhart came to Purdue in the 1930s as a counselor of careers for women, which she claimed as a first for women in the U.S.

She also wore slacks on campus, something women were forbidden from doing outside residence halls at Purdue in the 1930s.

That sparked one female student to ask the administration, “If it’s OK for Amelia Earhart, why isn’t it OK for us?”

The answer was simple. She was told, “When you can fly an airplane across the Atlantic like Amelia Earhart, then you can wear slacks.”

It was another 30 years before Purdue women would be allowed to wear slacks on campus, Norberg said.

To this day, the Purdue flight connection – which began with a Purdue grad working with the Wright Brothers -- continues.

One of the current design engineers at Purdue, Norberg said, has created a flight suit astronauts “will wear when they go to Mars.”

Even after 150 years, the “giant leaps” just keep on coming.