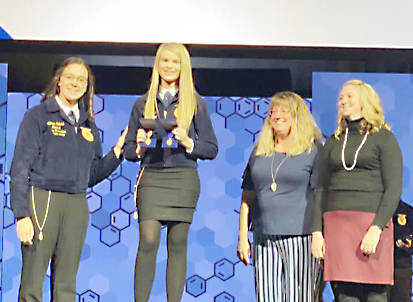 Mary Timm is all smiles as she receives her national award during the National FFA Convention Friday evening, with FFA advisers Kate Skirvin and Janna Oxford (right) looking on.
Courtesy photo

INDIANAPOLIS — The North Putnam FFA chapter came away with two major successes at the 92nd National FFA Convention & Expo, which was held at the JW Marriott hotel in Indianapolis from Oct. 30 to Nov. 2.

North Putnam High School had eight members compete at the convention, all of whom gave the school its most successful FFA convention in the chapter’s history.

Mary Timm came out on top when she was announced as the overall winner in the Small Animal Production and Care: Entrepreneurship/Placement category. She is only the second individual student from North Putnam to win a national FFA award.

This award area requires FFA members to fill out an 11-page form about their supervised agriculture experience (SAE) program. Timm’s SAE involved raising and selling sugar gliders, a project she began during her freshman year.

Since then, Timm has created a website, become the largest breeder in the state and sold dozens of sugar gliders.

The Conduct of Chapter Meeting (CCM) contest requires students to successfully use Robert’s Rules of Order to properly state a main motion, as well as four other motions. Students also extemporaneously debate the main motion.

“Most advisers can go their whole career without having a National Proficiency finalist or a gold-level National contest,” FFA adviser Kate Skirvin wrote to the Banner Graphic. “We are very proud of our kids for never giving up and giving North Putnam the most successful National FFA Convention in the history of our local FFA.”

Fellow agriscience teacher and FFA adviser Janna Oxford was also present at the ceremony when Timm and her classmates received their awards.

More on additional successes from the FFA chapters at Cloverdale and South Putnam during the convention will be shared in an upcoming edition of the Banner Graphic.