BENNETT'S MINUTES: How hoop fans contribute to officials’ shortage, and a guide for fans who think they know the rules (but don’t) 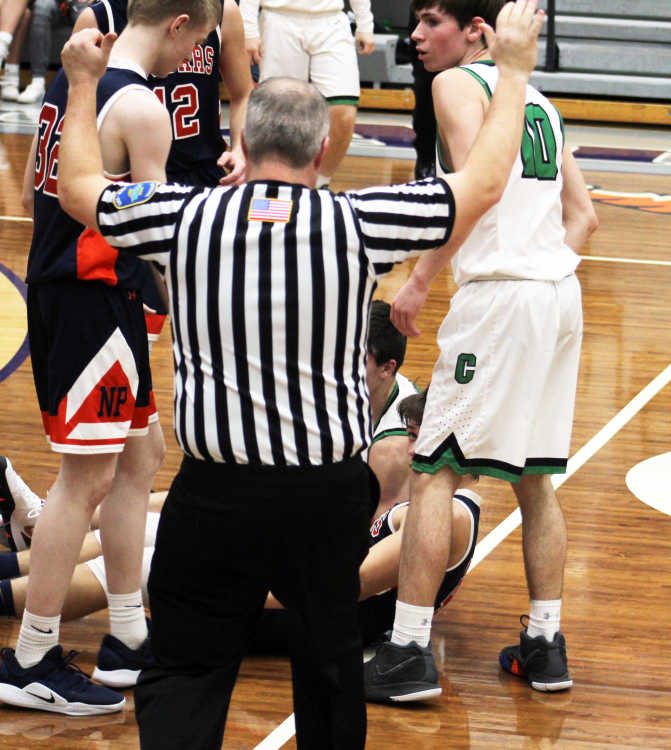 You have probably heard of the officiating shortage the IHSAA is undergoing, and with the average age of an official being 55 that shortage is going to get far worse as time goes by than better.

One example of the desperation of the IHSAA for state finals officials came last spring when I saw a veteran basketball official in his mid-60s who I know has had both knees replaced.

He had not done a tournament for 10 years, but said the IHSAA called him and said they really needed him. He did it, and I’m sure did the best he could, but was really not physically able for such an important job.

I have a lot of theories on the reason for this officiating dilemma:

Here are some of them:

• Lack of vision — This problem has been festering for many years, and is continuing to grow in severity. You’ve likely heard of the many football games postponed this fall due to a lack of officials.

The IHSAA itself and officials’ organizations need to do a better job of recruiting new officials. I see tables set up at the various state finals events I attend trying to recruit, but the effort needs to go further than that.

Colleges and universities need to offer classes in teaching officiating and try to coordinate with local middle schools to get new officials started. (We all took bogus college P.E. courses for sports we already knew how to play, so this would at least do some good.)

Former players often look for ways to stay involved with sports, and this would be a good remedy.

• Using common sense — I was an IHSAA official for about 35 years in basketball, softball and baseball.

My career came to an end a few years ago because of a ridiculous exchange I had with the IHSAA. My renewal form came in the mail toward the end of the school year, and I put it into a pile of mail I termed “non-critical” that I would get to when I found time.

I didn’t stumble across the envelope until later in the summer, and I quickly realized I had forgotten to pay this bill. I wrote a check for my officials membership dues (about $25 at the time) and mailed it to Indianapolis. I received a letter in return a few weeks later, but instead of my rule books and patches I got my original check and letter returned to me.

I was told that since I had missed the registration deadline that I owed a $50 fine in addition to my registration fee.

I will choose not to write what my response was upon reading this letter, but decided then there was no way I was going to be hijacked for extra money in this manner.

That experience got me thinking about how the real world deals with employee shortages. Instead of making new employees pay to work at a company, such companies will sometimes offer signing bonuses on occasion in particular times of need.

It should not cost one cent to be an IHSAA official, and they should start offering such bonuses to new people who want to help out.

Is this fair to long-standing officials who have paid dues for years? Probably not, but the many officials I know recognize the problem and would welcome the help without worrying about the money. That’s not why they do it any way.

Since basketball season is upon us, there are two more specifically related to that sport:

• Modern training methods — The testing for officials is often criticized, with a 100-question, open book true-false test obviously having some flaws. (Trust me, though, no one could try to find enough answers during the limited testing window to pass without studying.)

Many of the test questions have to do with procedural rarities such as false double fouls and what to do if a player is wearing the wrong color of undershirt. I have long felt that officials should get more training on much more important things such as “What is a foul, and what is not a foul.”

With the technology of webinars today, the IHSAA should compile game footage from the point of view of an official (Go Pro, perhaps?) and stop the video at the sound of a whistle. Have a question pop up about whether this was a foul or not, and then have someone in charge explain why (or why not) the play shown was a violation of any kind.

This would be much more helpful.

• Go back to using two officials — I doubt this will ever happen, but I think it would be a positive step.

With the advanced age of so many officials, running less is an obvious benefit for them.

I contend that officiating was better with only two officials than with three. There are so many overlapping coverage areas now that some calls do not get made because officials are waiting on each other to blow the whistle and neither of them does.

Besides, until the number of officials increases this will reduce the amount of officials needed for each night of the season.

Finally, and probably most importantly:

• Fans need to learn the rules and then chill out — You have probably also heard about the on-court or on-field physical attacks by parents, players and coaches toward officials. This problem is getting worse daily and shows no signs of improving.

Children are not taught conflict resolution nearly as well as they should be, and parents are far too inclined to blame others (teachers, coaches, officials, etc.) for the problems of their child in such organized settings.

I love going to basketball games. It’s one of my favorite things to do. (Good thing, since I’m starting a streak of five straight nights of girls’ games tonight.) But as the years go by I am more and more nauseated by the behavior of fans at games.

Let’s be clear — in no way am I saying that every game I see is well officiated or that all officials should earn an A+ rating.

I also concede that difficult calls such as foul/no foul or block/charge are ones that are purely the judgment of the officials and will not be agreed upon by both sides. Traveling is also tough, and has been complicated with the inexplicable toleration of the “Eurostep” and the many players who come to a perfectly legal jump stop on both feet and then take another big leap afterwards.

Those kinds of calls are tough to monitor with blanket statements.

However, there are a few specific rules that far too many fans simply do not understand and yell endlessly about inaccurate interpretations.

This section of today’s column is designed to provide information for such fans.

Here are my top three “eye-rollers”:

Each time a shot is taken, the three-second count starts over. Theoretically, a player could stand in the lane for 20 seconds or more as long as that player’s team was not in possession of the ball for three consecutive seconds during that time or a shot was taken every two seconds.

• Over-and-back violations — These are pretty clear in halfcourt offensive sets. Once the ball is established in the frontcourt, you cannot step into the backcourt. (I wish basketball courts were required to have the solid line to go through their mascots in the middle of the floor; this causes problems for fans.)

The problem occurs most often on throw-ins from out of bounds, although the rule is the same. Once both feet of a dribble and the ball are in the frontcourt, an over-and-back violation occurs if such player goes into the backcourt.

Here’s the easiest way to remember the rule:

Players should be more aware of this rule, also. I see several times a year a player grab a ball being thrown to them inbounds and heaving it backwards over their shoulders because they don’t think they can go into the backcourt. They can.

• “Reaching in” and “over the back” — These are seemingly the easiest to understand but two of the most commonly misinterpreted concepts.

Contrary to popular opinion, you can both “reach in” and go “over the back” all night long — as long as you don’t make illegal contact with someone else. If you do, then it’s a foul. “Swing and a miss” doesn’t count.

• “Hey ref, the fouls are 7-1” — There has never been a game played in which each team has committed an exactly equal number of instances of making illegal contact with opponents.

Some teams drive to the basket more, and get fouled more. Some teams have players who prefer to try to block every shot rather than move their feet and play actual defense.

These players commit more fouls than good players do, causing their teams to accumulate more fouls. Stop with this notion.

• “Palming” the ball — In reality, this violation should not really be “a thing.” When a player does this, he/she in actuality takes extra steps while the ball is being held up in the air and it should just be another form of traveling.

However, please quit yelling when a player standing still (maybe waiting to take the last shot) lazily “palms” the ball while the clock counts down. No advantage has been gained here, and no good official will call this. (If I’m a coach, I’m telling my players to quit doing this just in case.)

• Arguing the reason for a foul — I wish officials would not give a reason for their fouls calls, such as grabbing the wrist for a “hold,” karate-chopping the arm for a “hack” or putting out both hands in a pushing motion for that foul.

All this does is create reasons for uninformed fans to further challenge the foul call. (Please don’t be the fool who says far too loudly “that wasn’t a push, that was a block.” It really doesn’t matter, and is not a point worth arguing since a foul has already been called.)

• “I paid my $5, I can say whatever I want” — No, you can’t. You are embarrassing yourself, your family and your school, and you are also adding to the mass exodus of officials from the profession.

• “We always get homered when we come here” — Sadly, there is far more reality to this one than any of the others.

The likelihood of the same officials being present for a game who were at the last game your team played at a particular school is minimal. Unfortunately, this idea cannot be totally discounted.

My final story today on this particular point involves a girls’ junior varsity game I officiated at Covington a few years ago.

The South Vermillion player hit the free throws, and her team won.

As my partner and I were going back into the dressing room, we passed the varsity officials on the way out. One of them asked me “Did you call a foul on Covington on the last shot?” I replied that I did, because it was an obvious foul.

“You must not want to work here again, do you?”

I have never been more proud of a response to a question.

I hope that officials favoring home teams to get rehired doesn’t happen often, but it surely happens

So, after all this discussion, at least take away these thoughts:

• Officials are going to miss calls.

• Bad fan behavior only makes the situation worse when it runs off even more officials.